A Lifetime of Elementary Schools -- Part 1

Earlier this May I went to Chicago. While I was there I took a side trip to visit my old neighborhood...I took some pictures.

Here's a picture of the first elementary school I worked in...this one as a student. I attended Philip Rogers School (1953-1962) from Kindergarten through Eighth grade (the first few years, K through 2, I think, were in portables since there were too many of us for the "main building"). 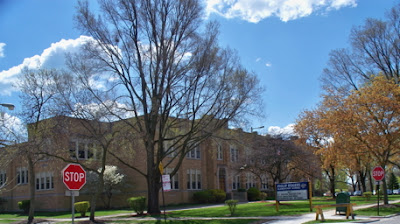 1. I had no idea you had ever played the tenor sax or the clarinet!

2. One of my best memories of elementary school is of Mrs. Eager reading aloud to us. Sometimes she would let a student read aloud instead. Oh, the joy when she asked me to do it!

I remember Dr. Elkin wrote a book called 'Stone Soup'. Over the years I've seen several books by the same title all by different authors....but I think his was the first?

Pamela, Stone Soup is an old folk tale rewritten by many authors. Dr. Elkin may have written a version. Gillespie and the Guards was a Caldecott Honor Book in 1957...probably his best known book.

I remember Dr Elkin. I wonder what he would think of a teacher’s Union today refusing to come back to school and teach during the pandemic