A Lifetime of Elementary Schools -- Part 3

The first school I taught in was Coesse Elementary in Coesse, Indiana.

I worked as a half time kindergarten teacher for one semester in the Spring of 1976. This one semester is why I say I taught for 35 years. It was half time for half a year. The State of Indiana doesn't acknowledge it, since I wasn't on a regular teachers contract, but I had my own class, had the responsibility of the students' kindergarten (second semester) year, so in my mind, it was my first year teaching. 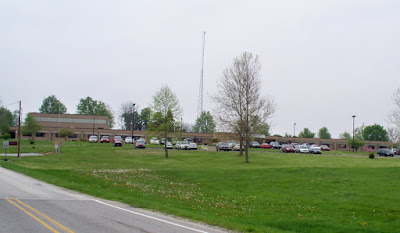 How did it happen that I had a second semester of kindergarten? Where were the students the first semester? The teacher who shared the classroom with me (morning kindergarten half time) and the other, full time kindergarten teacher, had large classes the first semester. The school board would not agree to an additional section of kindergarten but the school could afford a teacher's aide. I was hired in that capacity, but instead of helping in other classrooms several students were moved from each class to make up an additional class...and I became the teacher.

Coesse, at that time, was a K-8 Elementary/Jr. High School. I worked closely with the first grade teacher next door. In addition to the kindergarteners I had for half a day, I also had 4 first graders who came over to my class for the afternoon.

The principal, Ed Kitt, was also a two-class-a-day Jr. HS Social Studies teacher...the first and last principal I worked with who was a teaching principal.

It's been quite a few years...and it's hard to remember only one semester, but here are a few things I remember from Coesse.

1. The students were well behaved, so I didn't have many discipline problems. Some of the students had a great deal of difficulty learning and this was my first experience at having the responsibility of analyzing students' learning styles, abilities and problems. With the help of the first grade teacher next door, who spent lots of time with me after school on most days, I was able to provide what I hope was a good experience for the students. The principal also came in regularly to offer help and, I suppose, check up on what I was doing.

2. I made it a point to read aloud to the students twice during each day. Every day we would start with a book. This was, even at this early stage in my career, one of my favorite activities of the day. I hadn't read Jim Trelease's book yet (the first edition, of which I have an autographed copy, was published in 1979), but I had a good background in read aloud from my teacher education classes.

4. Coesse Elementary was part of a larger county system, and the job there helped me find a permanent teaching job...which I didn't keep. I was hired the following year to work at a school nearby and teach second grade. At the last minute, the personnel director of a school system much closer to my home (and at which I did my student teaching) called and offered me a position teaching third grade at Monroeville Elementary (Part 4). I was glad to give up the job that was offered in Coesse's system. On my way to the school I was going to be assigned to I had to drive through an area peppered with billboards put up by the John Birch Society...which made me very nervous.

5. I remember a few of the staff meetings. I didn't know most of the teachers, but they were all very friendly, welcoming and encouraging. At the last staff meeting I was given a good-bye gift. A nice gesture for someone who had been there such a short time.

6. We practiced counting to 100. When students could count and identify numbers to 100 I would send home a certificate announcing that they were in the "100 Club." One of my students, a bouncy, distractible, low achieving little girl, happened to tell me that her father told her that she wouldn't be allowed to ride her horse until she got into the "100 Club." I sent home a certificate with her that very night.

Regarding point #2: One of the most fun things I EVER did in school, and that I remember the best, was when Mrs. Herman had us read The Lion, the Witch, and the Wardrobe (to ourselves) and then illustrate our favorite parts. I got so carried away with that assignment and I still remember a bunch of the drawings I did! I'm sure it helped with reading comprehension or something, but I just remember it being so fun!