A Lifetime of Elementary Schools -- Part 4

Part 4 in a self-indulgent virtual trip reminiscing about my years of teaching elementary school... 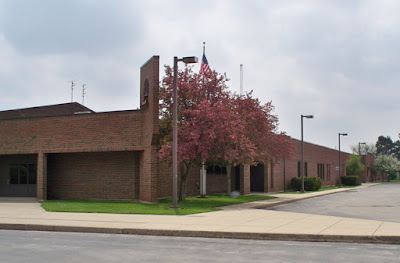 Mr. Wil Ogle, the principal, helped me find my way my first few years. He was patient when I held my class too long and the buses left before I got the students out the door. He accompanied me to Newark to a conference on writing. He gave me evaluations with constructive criticism and good suggestions.

It was at Monroeville that I learned the basics of how to teach and developed my style of teaching which emphasized reading.

Challenging students: Students who have difficulty need to be challenged, but providing materials at too difficult a level is a waste of time. A child reading at a first grade level should not be forced to work at grade level material which is too hard. This was reinforced when I did my reading recovery training and learned about Vygotsky's Zone of Proximal Development. A student needs to be taught at a level that is just beyond what s/he can do alone...that's where learning occurs. One size does not fit all.

Evaluations: Different teachers have different strengths and weaknesses. It's easy to look at what's going on in a classroom and make a judgment about it. "That teacher is bad..." or "That teacher is good..." A good principal (or other evaluator) can look beyond a personality and see the entire class, identify the strengths a teacher has and help her build on those. If there are areas of weakness a teacher needs to work on them to improve, not be labeled as ineffective and derided. Not everyone teaches the same way...nor should they. Teachers need to use their own strengths. One size does not fit all -- and that goes for teachers as well as students.

During one parent/teacher conference I remember a parent began discussing another teacher in the building. He spoke about how "bad" she was as a teacher. I asked for specifics and the response was "I can just tell...she's no good."

Years later, when I was teaching at Woodburn Elementary (which will be "A Lifetime of Elementary Schools - Part 5") I began to understand what went into teacher evaluations. The principal at Woodburn made comments on my evaluation, with specific information about what I did, pro and con. He included suggestions for improvement, specific to the comments he had made. It was an evaluation done with care and attention to detail.


Evaluations don't need test scores to be valuable. An evaluator who is well trained, and gives suggestions, comments, criticism and corrections honestly will provide a good evaluation. I received almost 20 evaluations over the course of my career. The ones which were the most valuable had specific discussion of things which the principal saw in my classroom. Those were the evaluations which helped me develop into a better teacher. Those were the evaluations which encouraged me to continue to learn and grow as a teacher.

Teachers: As a beginning teacher the exposure I got to other teachers was valuable. I remember...

...the male kindergarten teacher who reinforced my belief that men need to be at all levels of elementary education.

...the first grade teacher who was "old school." I was watching my students "bounce" down the hall on their way to the gym. They weren't noisy, just bouncy, like 8 and 9 year old are supposed to be. She told me that they weren't walking in a "line." I said that when I couldn't "enjoy watching my students being children I was going to retire." I think that was the first time I realized that I didn't want to teach longer than my effectiveness lasted. Once I lost the spark I was going to be finished.

Students: I also learned about differences in students...

...S, a student in my first third-grade class, was responsible for getting himself and his first grade brother off to school every day. His parents worked at a factory and worked the third shift. They were asleep when the boys woke up every day. Two years later I had J, his brother.

...One of my third grade students, L, was the last of 12 children in her family and the only girl.

...Another third grader, after I caught her cheating on a spelling test, told me that she didn't have time to study. "You just don't understand how busy I am!" she said.

After the meeting, the director of special education scolded me and told me that what I said "could get us sued" and that I needed to be an advocate for our school system. I responded that perhaps, if we didn't have an appropriate placement for the child, we deserve to be sued and that I was an advocate, not for the school system, but for my students.

That was the first significant conflict which I had with an administrator...and not the last.

Lasting Contributions: I'm also proud of the experiences I provided for my students. Often, years after I had them, when former students would meet me, or write to me, they let me know that I had influenced them in some way or another. Most of them wrote about my obsession with Reading Aloud. But one was different.

I got a letter from, R, a former third grader 20 years after I had left Monroeville. He wrote to me to thank me for the time we had made Father's Day cards. He told me that his father had recently died and the Father's Day card I helped him make and send as a 9 year old, was the last communication he ever had with his father. At the time he sent the letter he was in inmate at Indiana's maximum security prison serving a life sentence for murder.

Not everything that counts can be tested by filling in a bubble on a standardized test.

Monroeville Elementary School closed after the 2010-2011 school year in a cost cutting, building closing plan which the school board implemented. See...Closing Schools.

Quote for the day: Children Are Not Shoes
"[The Chamber of Commerce] says the public school system, the country’s most important civic institution, should be run like a business, a philosophy championed by some of the most high-profile school reformers today.

"The effort to do so -- now being supported by the Chamber of Commerce, some of the country’s biggest philanthropists, and the Obama administration -- is weakening the public schools and, ultimately, will make it harder to build a dedicated cadre of effective teachers and improve the achievement rates of minorities." -- Valerie Strauss in The Chamber of Commerce's flawed 'Superman' school reform guide.
Posted by Stu at 10:13 AM