A KWL chart is a simple graphic organizer which we can use to guide research and learning. 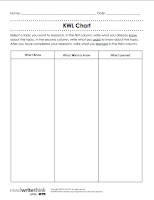 We use the KWL chart by simply filling in the columns. The first column, What I Know, is used to activate prior knowledge and organize what we already know. The second column, What I Want to Know, sets our learning goals. The third column, What I Learned, is the place to record what we have learned about our research.

I decided to try applying the KWL chart to current controversies in public education. I only got as far as the What I Know...

A. We know that standardized tests don't measure what children learn.


Test results don't necessarily indicate achievement, but rather, tend to be much more accurate indicators of the size of a student's house or the income of the student's parents. Research has indicated that the amount of poverty found in a community, and other factors that have absolutely nothing to do with what happens in the classroom, account for the great majority of differences in test scores from one area to another.


B. We know that standardized tests shouldn't be used for teacher evaluations.

A Dangerous Obsession by Linda Darling-Hammond


Recent research shows that test score gains are highly unstable and error-prone for measuring individual teachers, and that making high-stakes decisions based on these tests causes schools to reduce their teaching of important content and skills not measured by the tests. As a group of leading researchers warned last week before the New York Regents voted on such a scheme, we can expect teaching and curriculum to be narrowed further as teachers focus more intensely on these tests, and we can expect teachers to seek to avoid serving special education students, new English learners and others whose learning is poorly measured by the tests.


Using VAMs [Value-Added models] for individual teacher evaluation is based on the belief that measured achievement gains for a specific teacher’s students reflect that teacher’s “effectiveness.” This attribution, however, assumes that student learning is measured well by a given test, is influenced by the teacher alone, and is independent from the growth of classmates and other aspects of the classroom context. None of these assumptions is well supported by current evidence.

Most importantly, research reveals that gains in student achievement are influenced by much more than any individual teacher. Others factors include:


C. We know that teachers aren't in it for the money and so-called "merit pay" schemes don't work.


Rewarding teachers with bonus pay, in the absence of any other support programs, does not raise student test scores, according to a new study issued today by the National Center on Performance Incentives at Vanderbilt University’s Peabody College of education and human development in partnership with the RAND Corporation.

D. We know that Poverty is not an excuse. It's a condition and it has implications for learning.

Stephen Krashen questions whether our schools are broken

The fact that American students who are not living in poverty do very well shows that there is no crisis in teacher quality. The problem is poverty. The US Department of Education insists that improving teaching comes first: With better teaching, we will have more learning (higher test scores, according to the feds), and this will improve the economy. We are always interested in improving teaching, but the best teaching in the world will have little effect when students are hungry, are in poor health because of inadequate diet and inadequate health care, and have low literacy development because of a lack of access to books. Also, studies have failed to find a correlation between improved test scores and subsequent economic progress.

The relationship is the other way around: “We are likely to find that the problems of housing and education, instead of preceding the elimination of poverty, will themselves be affected if poverty is first abolished.” (Martin Luther King, 1967, Final Words of Advice).

The 7 Myths of Class Size Reduction -- And the Truth


The Institute of Education Sciences, the research arm of the United States Department of Education has concluded that class size reduction is one of only four, evidence-based reforms that have been proven to increase student achievement through rigorous, randomized experiments -- the "gold standard" of research.


"Do teacher unions hinder educational performance?" Focusing on two of the best-known standardized tests, the Scholastic Assessment Test (SAT) and the American College Test (ACT), the authors examine whether interstate variation in standardized test performance is negatively linked to interstate variation in teacher unions. They find a significant and positive relationship: that is, the presence of teacher unions appears to be linked to stronger state performance on these exams. These findings challenge the position that teacher unions depress student academic performance, and in so doing invite further empirical scholarship on this topic from a range of academic disciplines.


G. We know that most charter schools are no better than regular public schools. Some are better, but many are worse.

The Myth of Charter Schools by Diane Ravitch


Some fact-checking is in order...only one in five charter schools is able to get the “amazing results” that it celebrates. Nothing more is said about this astonishing statistic. It is drawn from a national study of charter schools by Stanford economist Margaret Raymond...Known as the CREDO study, it evaluated student progress on math tests in half the nation’s five thousand charter schools and concluded that 17 percent were superior to a matched traditional public school; 37 percent were worse than the public school; and the remaining 46 percent had academic gains no different from that of a similar public school. The proportion of charters that get amazing results is far smaller than 17 percent. Why did Davis Guggenheim [Waiting for Superman] pay no attention to the charter schools that are run by incompetent leaders or corporations mainly concerned to make money? Why propound to an unknowing public the myth that charter schools are the answer to our educational woes, when the filmmaker knows that there are twice as many failing charters as there are successful ones? Why not give an honest accounting?

H. We know that American public education is not failing. American economic policy is failing.

Poverty is the problem that must be solved... Our Schools Are Not Broken...


Studies show that middle-class American students attending well-funded schools outscore students in nearly all other countries on these tests. Overall scores are unspectacular because over 20% of our students live in poverty, the highest percentage among all industrialized countries. High-scoring Finland, for example, first on the PISA science test in 2006, has less than 4% child poverty.

See also:
Protecting Students Against the Effects of Poverty: Libraries