A few months ago, I wrote about the Parent Trigger movement and the upcoming movie, Won't Back Down.


Simply put, parent trigger laws allow 51% of parents of a given public school the right to close a "failing school" or replace it with a privately managed charter.

This is just another way of replacing public schools with corporate charters*. It seems to me that this sort of change would permanently eliminate any parent voice. Unlike elected school boards, corporations are beholden to their stockholders -- not to the parents of the children in their schools.

The real villain in the movie, however, is the teachers union,


No corporate reformer has yet been able to explain why, if unions are so bad, Massachusetts for example, where unions dominate public education, have successful schools based on the all important test scores and states that don't allow teachers unions like North Carolina and Texas rank so low in the test score contest.

In addition, take a look at the plan for reform published by the Chicago Teachers Union. It includes reduced class size, a full curriculum (including physical education and the arts), wraparound services which address poverty, age appropriate early childhood programs, well maintained facilities, increased support for teachers (and yes, it includes better pay) inclusion of parents in the education process, and full funding for education.

This is the kind of education that "reformers" want for their children and it's being promoted by a teachers union! Will corporate charters provide this type of education?

Occupy Education Reform a grassroots movement against the "reformers" said, 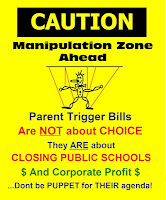 Parent Trigger Bills are not about choice. They are about closing public schools and corporate profit. Don't be a puppet for their agenda!

We need to speak out against the propaganda from ALEC and the corporate "reformers".

Parents Across America is trying its best to start a grass roots movement to publicize how wrong the Parent Trigger option is. Read Time to tweet the stars!


We know that most of the performers, like the actors in the movie, don’t have a clue how they are being used to promote school privatization in the guise of parent empowerment, but this concert and WBD movie are going to put the issue front and center and we need to make sure that our voices are heard.

...reach out to everyone you can about this movie and concert. This movie is designed to be even more powerful than Waiting for Superman, and we need to counter it with every thing we have. How do you fight Hollywood? Make the movie controversial, not feel-good. Take it to the stars who mean well but need to open their eyes to what they are doing. Everyone needs to write to CBS, too.

Everyone wants to write to a star, right? A list of contact info for a few of those involved in the Teachers Rock concert follows (gleaned from posters on Diane Ravitch’s blog). The easiest thing to do is to facebook and tweet them, keeping on mind that they are not the enemy. Post your thoughts on their facebook pages, twitter feeds, use their e-mails, write to their publicist! This is the big one and we need all hands on board!

*References to charters generally imply corporate, for-profit charter schools. Quotes from other writers reflect their opinions only. See It's Important to Look in a Mirror Now and Then


~~~
Stop the Testing Insanity!
Sign the National Resolution on High Stakes Testing!
~~~
Posted by Stu at 10:24 AM

I just wanted to say that I really appreciate that you not only read my comment about corporate charters vs. non-profit progressive charters, not only responded, not only committed a whole post to it, but you link back to that post when it's relevant. It means a lot to be heard.

I've started a blog that will hopefully try to process and tease out some of what it means to be at a charter school that rejects the privatization ideology, de-emphasizes high-stakes testing, and has an elected non-profit board -- but still is technically part of the Charter Movement.

E-mail incw.2008@gmail.com if you want the password for the protected entries.

Thanks for reading, Bella. I have sent an email to you via the address you enclosed.