Tis the season, it seems, for anti-immigrant fear mongering.

Phyllis Schlafly, the great-granddaughter of a European immigrant who lived in Canada before coming to the US, wants to ban foreigners from playing on U.S. professional baseball teams.

When I first saw that I thought it was a joke...an article from the Onion. But no. It's no joke. Schlafly, whose great-grandfather emigrated to the United States from Scotland, wants to ban all foreigners from playing professional baseball in the U.S.

THEY CAN'T SPEAK ENGLISH AND ARE STEALING JOBS

A good portion of the food Schlafly puts into her anti-immigrant mouth every day was likely picked and processed by people who don't speak English.

And what about stealing jobs? Does Schlafly make sure that everything she puts on her native born body or into her home is manufactured by native born Americans, in American factories, owned by Americans? What about her cell phone? What about the computer she uses to write her poison? What about the car she drives, the TV she watches, the microwave in which she heats up her coffee.

The hypocrisy takes my breath away...

Second, we shouldn't allow foreigners to play baseball because they


did not rise through the ranks of Little League

I didn't make this up. She actually wrote this.

Yes, it's true that Little League baseball was started in the US in 1939, but as of 2016 Little League International supports baseball for children in 80 countries around the world including places rarely associated with baseball such as Uganda and Turkey. So, saying that no foreign born player has risen through the ranks of Little League is very likely untrue, especially those who hail from the baseball rich cultures of the Dominican Republic, Venezuala, Mexico, and Japan.

And...what? Little League is now a prerequisite for playing professional baseball? Where did all the pre 1939 baseball players come from? Where did Honas Wagner play Little League? What about Christy Matthewson? Was Three-finger Brown a pitcher in Little League before he lost parts of two fingers in a farm implement accident?

Just to be sure I'll check the article to make sure it's not from the Onion...


Baseball is a wonderful activity for boys and young men.

If you are going to write about Little League and baseball, you ought to know something about it. Little league (unlike organized, professional baseball) is not gender exclusive. Girls are actually allowed to play baseball with boys. In fact, a girl, Mo'ne Davis of Philadelphia, Pennsylvania, pitched a shut out – a two-hitter – during the Little League World Series in 2014.

I wonder...if Mo'ne Davis decides to pursue a career in professional baseball would Schlafly approve because she's an American, and came up through the ranks of Little League.


All six of the six recipients of the top awards this past season are native born American, but more than a quarter of Major League Baseball players are foreign-born

Yes, I knew that all six of the six recipients of the top awards in 2015 (MVP, Rookie of the Year, and Cy Young) are native born Americans.

Past winners, however, include Dominicans, Cubans, Venezualans, Canadians, Mexicans, and Japanese. True baseball fans recognize names of stars like Albert Pujols, Miguel Tajeda, José Abreu, José Fernandez, Miguel Cabrera, Félix Hernández, Joey Votto, and Ichiro Suzuki. Cherry picking one year of award winners does not mean that all the players descended from immigrants are better than all the players who are immigrants.

But baseball, and other sports, reflect the fact that the United States is a nation of immigrants. The anti-immigrant/false patriotism spouted by bigots like Schlafly has no place in any professional sport in this country. Indeed, it has no place at all in our nation.

In the best tradition of this nation, immigrants like the players mentioned in the paragraphs above, come to the U.S. to improve their lives, just like Schlafly's Great-Grandfather Stewart did when he came to the U.S. in 1851 from Scotland. If the U.S. had Schlafly's no-foreigners-allowed policy back then, chances are Phyllis Schlafly would have grown up as a Canadian. 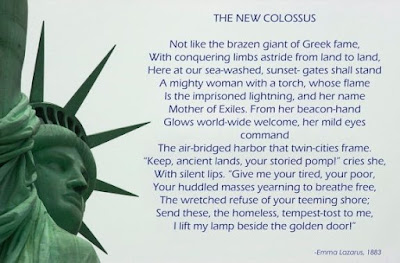 IT'S A SMALL WORLD AFTER ALL

We live in a smaller world than humans of the past. National boundaries are not corporate boundaries. Goods and services are mobile. Even those things "Made in USA" are likely to have foreign parts.

People, too, are more mobile than before. It doesn't take 2 months to sail from Europe to North America any more. We've seen the Earth from space...national boundaries aren't visible.

Sooner or later people are going to have to accept that all of us live together on one, small planet.

Which is the more "American" policy? Locking our door in fear of the stranger, or welcoming the "huddled masses yearning to breathe free?"

It's time we outgrew our antiquated tribalism.