"...corporate education reformers," says Russ Walsh in this blog post, "are anti-democracy." That statement rings true, especially now, at the end of this year's Indiana General Assembly Session. Legislation making the state's Superintendent of Public Instruction an appointed position first failed, and then passed the General Assembly after significant political manipulations from legislators who were anxious to take the right to vote for education away from the people. The state Board of Education is already filled with political appointees, and now, beginning in 2025, the office of the Superintendent will be as well making Indiana one of only six states where both the executive head of the Department of Education and the members of state's board of education are appointed.

These are the same anti-democratic legislators who have spent the last half dozen years transferring tax money from public schools to the pockets of corporate charters and church-run private schools. The budget for this year, for example, gives public schools a 1.6% increase while increasing funding for "Choice Scholarships" (vouchers) by 7% and giving SGO tax credits a whopping 31%...all paid for with public tax dollars.


I suggest that those of us who oppose vouchers and charter schools call school choice what it is in the eyes of that Ohio voter, tax theft. The government collects our taxes in order to provide essential services to all of us. There is no choice involved, we all must pay taxes (unless, apparently, we are hugely wealthy). Those essential services include providing for a military, promoting research on health and welfare, providing for police and fire protection, and funding public schools. When money is diverted from the support of the public schools, it amounts to, as the Ohio voter said, theft. Or maybe another way to say it is "taxation without representation", since voters have no voice and no oversight of how tax money is spent in schools that receive money through vouchers or charters.

The goal of "reformers" is, apparently, the complete and total destruction of public education.


Many years ago, Jerry Falwell articulated the goal of the school choice movement well when he said, "I hope I live to see the day when, as in the early days of our country, we won't have any public schools. The churches will have taken them over again and Christians will be running them. What a happy day that will be!"

This op-ed by David R. Currie, Ph.D., of Pastors for Texas Children, could easily have been written about the state of Indiana.


Vouchers, school choice, education savings accounts — they are all code words intended to mask the real aim of this movement: destroy public education in America and turn all schools into institutions of religious indoctrination. 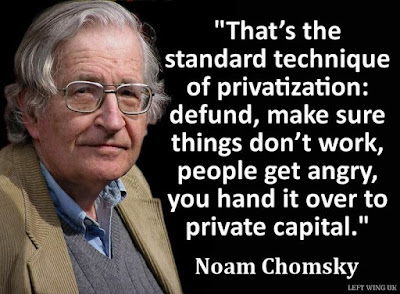 THIS Is What’s Wrong With America

Congressman: "Don't confuse me with facts..."


A Facebook friend who lives in Todd Rokita’s Congressional district attended his recent Town Hall. In a post following the event, she reported on an exchange she had with the Congressman:

My question was “What evidence do you require in order to revise your opinion on climate change?”

His response was “No evidence could ever exist that would change my mind. It’s all Liberal science.”

...I really never expected to live in a country where science and empirical research required defense, but evidently Luddites aren’t simply historical oddities. So later this morning, I will join other Hoosiers at the Statehouse to participate in a “March for Science.”

"Tenure" is perhaps the most misunderstood concept in K-12 education. It's also a concept which "reformers" disingenuously claim, allows teachers a "job for life." "Tenure" in K-12 education doesn't mean "a job for life" as Chester Finn of the Thomas B. Fordham Institute believes. Instead, the K-12 version of "tenure" simply provides teachers with due process.

In Indiana, when K-12 teachers had tenure, teachers who administrations wanted to fire were allowed a hearing before an impartial observer. When administrators did their jobs, teachers who were guilty of immorality, incompetence, or illegal behavior, were fired. Since 2011, however, teachers in Indiana longer have "tenure." A teacher who is going to be fired may request a meeting with the superintendent, or with the school board, but no impartial observer is required.


...while there are some large districts where the process is long, convoluted and prohibitively difficult, mostly "We can't fire her because if tenure" is administrator-speak for "I could fire her, but it would take a lot of time and I'd have to, you know, work really hard, and then I would have to find a replacement and you know how hard that would be and I'm already backed up on meetings this week and now some kid just threw up in the hall, so how about I just blame her on the union and tenure and get back to my own work." Where burdensome dismissal procedures exist, they have been negotiated into contracts. Fixing those contracts by outlawing tenure is like fixing the electoral college by installing a dictatorship-- little bit of overkill. 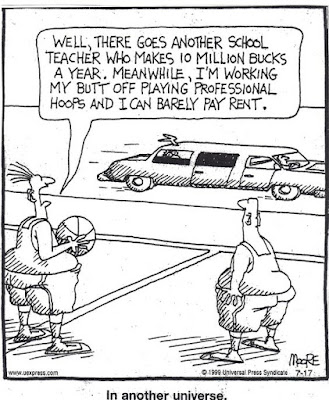 When school "reform" was in its infancy the "reformers" insisted that their policies would improve student achievement and reduce the economic/racial achievement gap. After several decades of "reformist" policies such as excessive testing and test prep, vouchers, and charter schools, the results are in. Students do no better now than they did before the "reforms" were initiated.

One of the worst problems features of "reform" is the overuse and misuse of standardized testing. Teachers no longer use test results to guide their instruction because, in most cases, the results of the tests are not timely or specific enough to help. When results are finally returned, they are used to evaluate teachers, grade schools and school systems, and as justification for closing neighborhood schools, none of which are appropriate or valid uses of the test scores.


At what point do parents, teachers, and administrators stand up and say “Enough is enough?” When do we begin to refuse to allow the removal of even one more dollar from our classrooms to continue to support this enormous exercise in futility.

How about now? Today.

The right number of standardized tests that we should be forcing down the throats of our children is precisely zero. The tests do not help our children, our teachers, or our parents. They have not improved education in America one bit.

Note the recommendations in this report – virtual charter schools should be held to the same accountability standards as public schools.

Marc Edwards – How to Address the U.S. Water Crisis in Flint and Beyond

Is your water safe?