We traveled on the train from Chicago to the San Francisco area for this year's Network for Public Education (NPE) National Conference which will take place in Oakland in a few days.

We've done the train from Chicago to the west coast several times. We enjoy the relaxed pace, and the scenery of the Desert, Plains and Mountains. We had the time...so we decided to do it again. 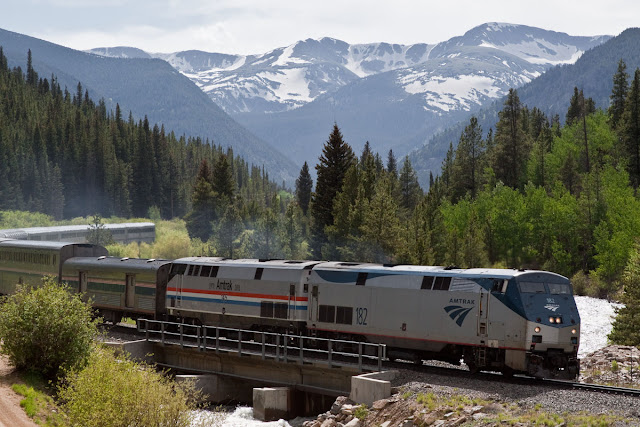 This year we encountered a new problem. Amtrak is working on the track between Denver and Salt Lake City so our train was diverted north to Wyoming and then west to Salt Lake City.

During the time we were on the alternate track, our train had to yield (and by "yield" I mean, sit and wait) often to "freight traffic." The alternative route was owned by the companies operating the freight routes (this, according to our sleeping car attendant) , and dispatchers from those companies chose who had the right of way on single tracks. They chose their own trains every time. After repeatedly waiting for those other trains, we arrived at our destination about 4 hours late.

In theory, I don't object to the track owners calling the shots on their own track. It's theirs, after all. They should get to give their own trains priority when there is a conflict. It was inconvenient, and it would have been nice if the dispatchers had given us priority now and then, but I can understand it.

On the other hand, Amtrak, a government subsidized rail corporation, is paying for the use of that track. They're giving the track owners public funds for the right to use the track. Doesn't that count for something?

This reminds me of the public funding currently going to private schools in the form of vouchers. Private schools get public money to teach students yet are allowed to choose which students they accept and which they deny. They can choose what curriculum they use...and why not (as long as the students are able to pass "the test")? They're a private corporation and are not obligated to follow the same rules as public schools.

The analogy between public education and publicly supported rail travel doesn't really work 100%. Amtrak, while privately subsidized, is a for-profit company, operated by a single entity. Public schools, on the other hand, are all non-profit and are owned and "operated" by their communities.

Still, should a private company which receives public funds be obligated to follow all the government regulations and requirements that public companies follow? Private freight companies do, of course, have to follow the laws and requirements of U.S. and the states in which they do business. But they do have some latitude in some areas - for example, prioritizing the trains traveling their tracks.

Likewise, Indiana's voucher law requires private schools to follow some of the laws regarding education if they accept public funding. The adults working in their schools must pass criminal background checks. Their students must take "the test." The schools will be "graded" on those tests, attendance, and growth, just like public schools. If they don't fulfill these and other, selected, requirements, then they may not continue to receive public funding.

However, private schools still get to "prioritize their own trains" by rejecting students who are behavior problems, or who function at a lower academic level. They still get to teach that humans and dinosaurs coexisted, and that the Earth is 6000 years old.

And in Indiana, thanks to the privatization-owned super-majority in the legislature, any or all of those requirements may – and sometimes have been – waived so that private schools can continue to get public funds even when they fail to fulfill the requirements of the state.

Competition in the freight and transportation industries drives improvement. Travelers can weigh the pros and cons of train travel versus air or car travel, and make their own choices. Failure means loss of business. Companies come and go. The market creates winners and losers.

Competition in education, however, is counterproductive and dangerous. Failure of a school isn't like the failure of a business. Children's futures, the futures of their communities, and the future of the nation, are at stake. When we create winners and losers in the education of our children, we guarantee that some people will be successful and others will not, yet the more people who are successful, the better it is for our society. If we continue to prioritize some children over others, the whole nation loses.


The goal of public education is excellence for everyone, but competition produces excellence for only a few, and sometimes not even that. It's a lousy metaphorical framework for education. Better, say, to talk about a garden on which we focus the full resources of the community to plant and water and tend living things to grow and mature without worrying about which one is tallest, sweetest or most vibrantly colored, or how we could best deprive one flower of water so that another can win a greenery contest. Education is not a race, and competition will not improve it. – Peter Greene, in Competition vs. Quality