THE WAR ON TEACHERS IS WINNING

Local superintendents in Indiana had the chance to speak out against "Indiana's war on teachers" and it's just in time. 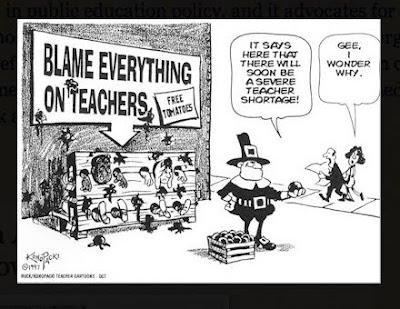 I understand that there's turnover in superintendent positions, but are any of these school leaders the same ones who, in the early to mid-2000s told legislators and State Board of Education members to - and I'm paraphrasing here - "do something about the damn teachers union"?

It was just too big a hassle, apparently, to negotiate with local teachers. The ISTA backed locals asked for crazy things like due process in firing, a decent wage, time to prepare for classes, and a manageable number of students. Negotiating was just too hard to do.

So now we come to 2018. The dismantling of Indiana's teaching profession by the General Assembly and State Board of Ed continues without pause. ISTA is so decimated that they're joining with anti-public education groups who have targeted teachers and unions to try to get a few more dollars for public schools out of the stingy, anti-tax, pro-reform General Assembly.

It's nice to see that superintendents are finally with us.


In a survey this year, Indiana State University researchers asked Indiana school superintendents if they faced a teacher shortage — and how bad the problem was.

“It’s killing us,” one respondent wrote.

“This situation is getting worse each year,” another said. “Scares me!”

“Indiana’s war on teachers is winning,” a superintendent commented.

Teachers already knew what was happening in the early 2000s when the "ed-reformers" were working their hurt on public schools in the form of privatization of public education.

We knew that one of the goals of the "reformers" was to damage the teaching profession and their union...to hurt those people who were on the front lines of advocating for the children of Indiana. Weaken the advocates and you weaken the schools. Weaken the schools and you open the door to privatization...vouchers, charter schools, loss of local control (see Gary and Muncie). Privatization would make all that tax money available for corporate profits.

Teachers knew in 2011 when the Indiana General Assembly stripped teachers of most of their collective bargaining rights, eliminated teacher pay scales, and ended incentives for advanced degrees.

We knew when teachers in Indiana went through years and years of stagnant salaries, loss of seniority rights, and lack of public support.

We knew when money earmarked for public schools was diverted to private and privately run schools.

We knew when test scores, which reflect economics more than academics, were used to bully and guilt teachers. We knew when the legislature decided to slap a label on schools and blame schools (and teachers) as "failing" when their test scores reflected the economic condition of the community.

We knew when teacher preparation programs were denounced yet REPA III said that you didn't need any education training to teach high school. 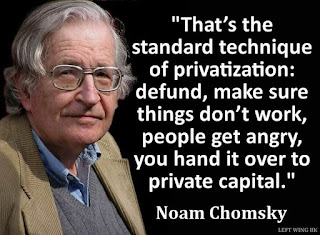 Now, thankfully, local superintendents have acknowledged that they know, too.


• "There is absolutely no incentive to stay in teaching or for that matter to pursue a degree in education. The pay is ridiculous. The demands are excessive. Teachers don’t really teach anymore, just test and retest. All the data-driven requirements are not successful in helping a student learn. Yes, we should have some testing but the sheer amount is ridiculous. I think we should go back to letting teachers teach. Let them be the professionals they were hired to be."

• “We are teachers because we care about our students, but many of the laws being made are not done by those who have been educators themselves. An idea can look good in theory, but not fit in the classroom as you may think. Educating our children is our future, and our state needs to take a hard look at how we can take a new approach, starting with Kindergarten.”

• “I believe the teacher shortage is due to the climate of education and the lack of government support as well as district support for teachers. Teachers have not been listened to or given the respect necessary to want to pursue careers. In our particular district, the constant negativity has caused a rift between campuses, and the negativity has created a hostile climate in which to work.”

I'm glad that superintendents are speaking out...I hope they get a bit louder!

Superintendents, if the war on teachers is winning, then your students are losing.

Join with your teachers as the political voice for your students.

This superintendent never once demanded that the legislature or any other entity get rid of teachers' unions.

Glad to hear that...thanks for your CONTINUED support for public education!

A couple of years ago I was attending a central discussion committee meeting and after about 15 minutes of listening to one upper administrator talk about how difficult their job had become and so I asked our ISTA representative there to give us the results of a teacher attitude survey that had just been completed. 58% said D or F, only 18% said A. I looked back at the row of upper administrators who were silent with a look of total astonishment on their faces. They had no idea how much we had been beaten down by our own state government, the media and those who would like to make a profit off of our students. The following school year there were more visible signs of recognition of the incredibly difficult work that the teachers in our corporation did everyday. It made it better but there was still a lack of visible fighting back at the top level. At a school board meeting I asked the board and administrators present what they were doing to get more support for our schools from the state. Only one person responded, a board member, and his comment was that he would talk to our local house representative once a month. I am glad to hear that superintendents now are doing more than just looking for that next step on a ladder to more salary and benefits. I am retired now, but my heart is still with those I left behind in the trenches. They deserve so much better than the treatment that our state government has given them.

Thanks for your comment and for your years of service to public education.

I hope that more central office administrators...and building principals as well...understand that we ALL have to work to support public schools.