2019 Medley #11 - Vouchers and the Wall Between Church and State

Vouchers; Government shouldn't interfere with religious institutions, and church wallets shouldn't be filled with government dollars.
There's a reason that I've been quiet on this blog for the last month...posting only a Father's Day remake of an annual call to fathers to read to their children, and a quick Medley in the middle of June.

Since mid-May, I have been somewhat self-absorbed dealing with a cancer diagnosis. This was followed by successful surgery, and now, recuperation. I have been assured that the offending cells have been totally removed and no new ones apparently remain. This is, of course, good news (though no guarantee of future events). Until the final pathology report, however, I was unsure of the future. Instead of commenting on public education issues, I was contemplating the very real possibility that cancer had spread into lymph nodes in my neck which would mean further treatment...chemotherapy and radiation.

As luck, and modern medicine, would have it, I was spared any additional treatment (for the time being, at least) and right now I can focus on recovering from the effects of surgery, a much more positive - if slightly uncomfortable - activity than worrying about putting my digital life in order.

I didn't ignore the news about public schools entirely. There has been news about privatization through vouchers. People like Bill Gates and the Koch Brothers are still devising ways to monetize the education of our children (because wealth implies expertise in education, right?), but some main-stream publications are writing about the conflicts caused by mixing tax dollars with religious education. Also, in some places, public schools were supported and privatization wasn't promoted...thank you Texas (I never thought I would say that!). But it's not all flowers and chocolates...

Until we repeal the First Amendment prohibiting the establishment of religion, the state shouldn't be allowed to favor religious institutions with tax dollars.

There's a difference between public and private. We don't subsidize folks who want to use a country club instead of public parks. We don't award vouchers so people can shop for books at Barnes and Noble instead of the public library. We don't give tax credits to people who drive their own vehicles instead of using public transportation. We shouldn't give any sort of tax credit/rebate/voucher for those who choose not to use public schools.

This Case Could Break The Wall Between Church And School


The case matters because it could open the door wide to the use of public tax dollars for private religious schools. The court could also drive a stake through the heart of voucher programs aimed at shuttling public funds to private religious schools, no matter how clever and convoluted the voucher scheme may be. That last possibility seems less likely, because, as with many issues beloved by the right, this is an issue that may be facing the friendliest court in many decades. This is definitely one case to watch for this summer.

Private schools ought to be able to decide who sits in their classrooms (as students or teachers). Governments should not interfere with religious institutions' ability to freely exercise their beliefs.

On the other hand, the government shouldn't pay to support those beliefs.

That was Jefferson's point in calling for a "wall of separation between Church and State." Keeping the government's hands off religion, and religion's fingers out of the public treasury are better for both the church and the state.


Gov. Ron DeSantis and Republican legislators promote spending millions in tax dollars on tuition vouchers at unregulated private schools as providing opportunities for more choices for students. What they don’t mention is some of those private schools have policies that say they will not accept gay students and will expel any they discover who are enrolled. Florida should not be effectively sanctioning such discrimination, and companies that have been supporting the existing voucher program should think twice about it.

An article from 2015 confirms this concept...


In states’ attempts to honor the separation of church and state, most private religious schools have fewer regulations to meet than their public school counterparts, which is an appropriate balance between the state interest in educating our children and respecting citizens’ First Amendment rights as long as parents or private foundations are paying the tuition and other education costs.

However, when the state subsidizes these educational costs, then this balance must shift to give the state mechanisms to oversee how the public tax dollars are being spent. Increasing government regulation over private religious schools threatens both their autonomy and their religious mission.

Indiana's Catholic schools get millions in public money. Some lawmakers want that to stop.

And here we are in Indiana facing just such a problem. Do we prohibit private schools from choosing who their teachers should be, or do we refuse to allow public money to be used at a religious institution which discriminates?


When Cathedral High School fired a gay teacher last week over his same-sex marriage, it renewed a long-simmering debate about public money that goes to private schools in the form of taxpayer-funded scholarships.

The school, which has said it was forced by the Archdiocese of Indianapolis to terminate the teacher or lose its status as a Catholic institution, has received more than $6 million from the state over the last six years through Indiana’s “choice scholarship” program.

Vouchers have been controversial since their inception, with critics saying they undermine the state’s public school system by siphoning students and money. In 2013, the state Supreme Court upheld the program as constitutional but that hasn’t stopped calls for reform.

“Again, we see a public institution engaged in an obvious act of discrimination because of sexual identity,” said Democratic Rep. Phil GiaQuinta, Indiana’s House minority leader, “but we do not have to sit by and watch this happen. 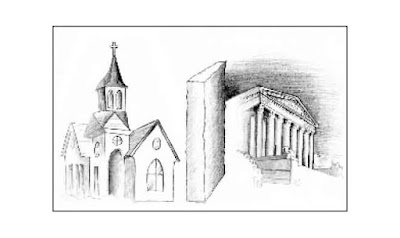 BE CAREFUL WHAT YOU WISH FOR

When The Wall Of Separation Comes Down


Here's what's going to happen. If you win the right to spend tax dollars on religious institutions (like, say, private schools), sooner or later you are going to be shocked to discover that your own tax dollars are supporting Sharia Law High School or Satan's Own Academy. And that's not going to be the end of it. Where resources are limited (there can only be, for instance, as many meeting opening prayers as there are meetings), some agency will have to pick winners and losers. Worst case scenario-- you get a government agency empowered to screen churches and religions. You can paper over it, as Kenai Peninsula apparently did, by turning it into a lottery (but what does it mean that God apparently let Satan's crew win that drawing).