Pasi Sahlberg came to the U.S. as a visiting professor at Harvard to help American educators learn how the Finnish school system became the world's best. William Doyle won a Fulbright scholarship to move to Finland to study the Finnish system. Let the Children Play: How more play will save our schools and help children thrive is the result of the collaboration they formed. 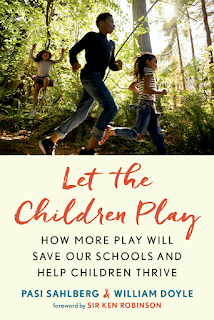 THE IMPORTANCE OF PLAY

Let the Children Play begins with a discussion of the research into play and its benefit for children. Groups such as the American Academy of Pediatrics, the National Academy of Sciences, and the Centers for Disease Control agree that play and physical activity are of critical importance to growing children, and are beneficial to their academics, and future skills.

Despite the science, however, play is disappearing from school due to so-called "education reform."


Despite this strong medical and scientific consensus that play is a foundation of children’s lives and education, play is an increasingly endangered experience for many of the world’s children.

Why is play dying in our schools? There are many social and cultural factors, and one major political reason is “GERM,” or the “Global Education Reform Movement,” a term that co-author Pasi Sahlberg has coined to describe an intellectual school reform paradigm that places academic performance as measured by standardized tests before children’s engagement, well-being, and play in schools.

The authors discuss and analyze Finnish schools. What makes them so successful? How can we learn from them? How have they used play to help their children achieve?

The Finnish philosphy of education, which is based on American educational research (see Finnish Lessons, by Pasi Sahlberg), is child-centered, something we in the U.S. have learned, but rarely practice.


In Finland, the main question isn’t “Is the child ready for the school?” but “Is the school ready for every child, and ready to accommodate each child’s differences?” 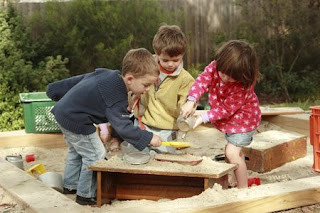 The child-centered school adapts to the child, not the other way around...and play is important. The seat-work style of American education is rejected. Children aren't required to start formal instruction until they're seven years old, and there are no standardized tests until the end of high school. What assessment there is, is also child-centered. During her visit to Finnish schools, Erika Christakis, author of The Importance of Being Little: What Young Children Really Need From Grownups, said,


I’ve found it impossible to remain unmoved by the example of preschools where the learning environment is assessed, rather than the children in it.

For several years, even without regular standardized tests, Finland led the world in student achievement as measured by the PISA tests. In recent years, however, their rankings have started to slip. Since they understand the limitations of tests, they didn't panic. They didn't start teaching to the test. They didn't label and retain students as "failing." They didn't fire or punish teachers. They didn't close schools or shame them with "F" ratings. Instead, they doubled-down on child-centered education.


In many other countries, politicians and bureaucrats would have pushed the panic button and declared a state of emergency. Common remedies would most likely have included teachers being penalized more for inferior standardized test data, and more academic pressure on children. But Finland didn’t do this. Instead, educators and government officials did something almost unheard of in the world of education reform. They talked to children. They then realized that one of the big overall problems was a lack of student engagement in schools and the fact that children feel their voices are not heard when it comes to their own learning and lives in school. 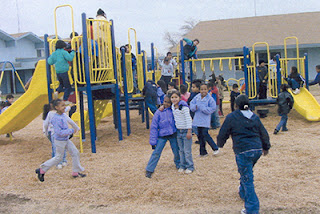 Throughout it all, there is play. Children in Finland aren't sitting at desks all day listening to their teacher or doing seat-work. Recess has all but disappeared in the United States, but the successful Finns, on the other hand, give their children fifteen minutes of unstructured free play time every hour because...


...learning takes place best when children are engaged and enjoying themselves.

Academic kindergartens and virtual preschools aren't the best way to build academic success for our children. Current research supports previous research. Play is children's work. Children learn through play. Worksheets in preschool and kindergarten, whether they're made of paper or on a computer screen, are inappropriate. Cooking stations, dress-up boxes, and building toys are what we need for our littlest learners. Bring back recess, blocks, and doll buggies. Teach young children through read-aloud, finger play, and singing. Give our youngest children time to play without adult interference.


In play, children gradually develop concepts of casual relationships, the power to discriminate, to make judgments, to analyze and synthesize, to imagine and to formulate. Children become absorbed in their play, and the satisfaction of bringing it to a satisfactory conclusion fixes habits of concentration which can be transferred to other learning.

Other good ideas from Let the Children Play...

On preparation for school


The lesson: If you want to get your young child ready for school, read to them—and play with them!

On ed-tech in the classroom 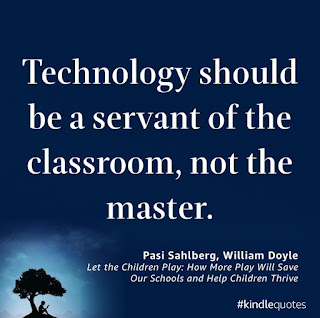 
School policy should be “data informed,” not “data driven.”

Let the Children Play: How more play will save our schools and help children thrive is not just for teachers of primary grades. Parents, upper grade teachers, secondary teachers, administrators, and everyone else interested in American education, will benefit from the information it contains.