Listen to the Experts

Remember that time you called your health insurance company because they denied your claim...

You probably thought, "why should an insurance company representative deny or attempt to deny coverage for something prescribed by my family doctor? What expertise do insurance company workers have in the field of medicine?"

A recent article in the Washington Post by Dr. William E. Bennett Jr., associate professor of pediatrics at Indiana University's School of Medicine, highlights part of the problem...

Insurance companies aren’t doctors. So why do we keep letting them practice medicine?


We know how important it is to have insurance so that we can get health care. As a physician, parent and patient, I cannot overemphasize that having insurance is not enough.

As a gastroenterologist, I often prescribe expensive medications or tests for my patients. But for insurance companies to cover those treatments, I must submit a “prior authorization” to the companies, and it can take days or weeks to hear back. If the insurance company denies coverage, which occurs frequently, I have the option of setting up a special type of physician-to-physician appeal called a “peer-to-peer.”

Here’s the thing: After a few minutes of pleasant chat with a doctor or pharmacist working for the insurance company, they almost always approve coverage and give me an approval number. There’s almost never a back-and-forth discussion; it’s just me saying a few key words to make sure the denial is reversed.

Because it ends up with the desired outcome, you might think this is reasonable. It’s not. On most occasions the “peer” reviewer is unqualified to make an assessment about the specific services. They usually have minimal or incorrect information about the patient. Not one has examined or spoken with the patient, as I have. None of them have a long-term relationship with the patient and family, as I have.

In other words, according to Dr. Bennett, doctors should be the ones to make medical decisions...not some distant bureaucrat in an insurance office. What a concept!

It would seem, then, that those with expertise in an area ought to be the ones we listen to...and that's true in all areas, not just medicine.

For example, it makes sense for us to pay attention to actual climate experts when discussing the problems associated with climate change...instead of a former insurance executive who threw a snowball in the Senate chamber as "proof" that there was no such thing as global warming, or a reality television star who decided that climate change was a hoax created by the "Chinese in order to make U.S. manufacturing non-competitive."

We need people with expert knowledge to help us understand and deal with things we don't know or don't have experience in. In his 2017 book titled The Death of Expertise: The Campaign Against Established Knowledge and Why it Matters, Tom Nichols wrote,


...experts will make mistakes, but they are far less likely to make mistakes than a layperson. This is a crucial distinction between experts and everyone else, in that experts know better than anyone the pitfalls of their own profession.

We regularly listen to people with expertise in an area because it's impossible for one person to know everything. Even within fields we sometimes have to go to specialists.

We rely on plumbers, electricians, engineers, and mechanics to take care of our plumbing, electrical, structural and automotive needs because it's impossible for one person to know everything.

It makes sense for the field of education, too. Who should you seek out if your child is struggling with reading? or middle school math? or high school English?

Who should you ask if you want to know what is going on in public schools in your town, city, or state? Who can tell you about the value (or lack thereof) of standardized tests, third-grade retention tests, and curriculum development? Who can you go to for help with your child with special needs? Where can you learn about the impact a lack of resources has on your child's classroom?

Who are the experts in public education?


A. A college drop-out who grew a tech company into a $100 billion net worth and spends millions of dollars experimenting with education.

B. A political appointee and basketball buddy whose only education experience was watching his mother teach.

Rely on those who have been trained and have experience. Ask the experts. 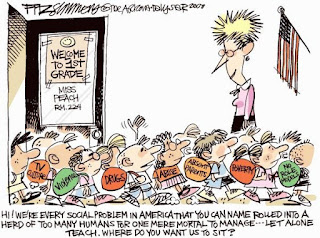