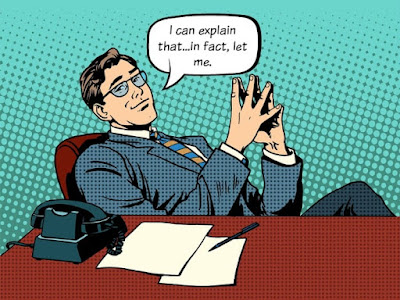 As an American male, I'm an experienced mansplainer. My former teacher colleagues (mostly female) would surely be able to give you an example or two of my tendency to "help them understand" something that they probably understood as well or better than I did. I remember once, at a meeting discussing psychometric testing of a student, I started explaining percentiles to another teacher. With a look of pity and loathing, she said to me, "I understand what percentiles are." What she likely left unsaid was, "I have an education degree, too, you obnoxious, insulting POS!" Out loud she added, "It's ok. I'm used to you."

Now that I have established my mansplaining credentials, I'd like to comment on a thread I read on Twitter this morning. The thread consisted of women giving examples of someone like me mansplaining something that they already knew.

I must admit...while reading the thread I felt the urge to add my own tweet explaining how Twitter threads work...

A FLASH OF INSIGHT

The thread that I read included a tweet from Dr. Jessica McCarty, whose Miami University (Ohio) bio reads,

I have no idea what most of that bio means, so I'll assume that Dr. McCarty is a fully qualified professional. Her tweet about mansplaining...

At a NASA Earth meeting 10 years ago, a white male post doc interrupted me to tell me that I didn’t understand human drivers of fire, that I def needed to read McCarty et al.

Looked him in the eye, pulled my long hair back so he could read my name tag. “I’m McCarty et al.”

At that point, I had a blinding flash of insight...

For the last few decades, politicians in the U.S. (mostly male) have been mansplaining education to American teachers (mostly female).

Think of politicians as the "white male post doc" and think of teachers as Dr. McCarty. For years they've been telling us "what's wrong with education" and "how to fix education" but the teachers are the real experts.

Were there any teachers, anywhere in the country, who believed that it was possible to have all students score "proficient" on standardized tests within a dozen years?

Of course not. The politicians who wrote NCLB had absolutely no clue what proficient actually means. Nor did they realize that standardized testing was an excellent method of determining a student's family income, but not much else.

And then we had Race to the Top. Not to be outdone, the Democratic designed education plan begun eight years later included evaluating teachers using student test scores. Were there teachers anywhere in the country who didn't understand that those teachers who taught in wealthy schools would get better "evaluations" than teachers who taught in high-poverty schools?

Once again, the answer is no. Politicians didn't notice that "good" teachers (by their definition) seemed to congregate at schools with children from wealthy families while poor kids always seemed to have the "bad" teachers. They didn't understand that correlation is not causation. They didn't understand that there are out-of-school factors that have an impact on a child's school achievement and that test scores do not define quality schools or quality teachers. David Berliner explained this well in Poverty and Potential: Out-of-School Factors and School Success. American schools are set up to reward students who come from wealthy families.

THE STATUS OF TEACHERS

By now it should be no secret why teachers are "mansplained" about education -- aka treated with less respect than other professionals. Teaching is still seen as "women's work" and those who hold control of the funding in education are mostly men.


In a field so dominated by women, it's not surprising that, in our patriarchal society, teachers are devalued and disrespected. Women still earn less than men. Women still have trouble reaching the highest levels of societal status (outliers notwithstanding). And women are still objectified in popular culture.

Money and status are still the most reliable paths to respect in our culture. The relatively low pay of the teaching profession and the fact that women make up the majority of educators, tends to lower the status of other teaching when compared to other professions.

In societies where education is more successful teachers are paid more and afforded higher status.

Now, the next time you hear a politician talk to a teacher or a group of teachers (or the general public) about "...what's wrong with education in this country" you'll know what's really going on.

And to my former colleagues (mostly female)...Thanks for reading. I really needed to explain this.