In Which I Think of Ways to Respond to My Legislators 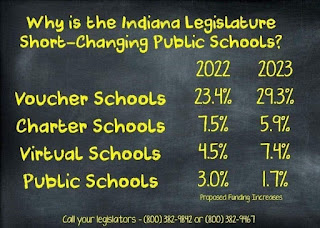 House Bills 1001 and 1005 would give nearly a third of the state's increase in education funding to the 5% (10% if you count charters) of the students who go to private schools. I had written to my local state rep, Dave Heine, but received no reply. He voted to approve the increase along with all of his Republican friends in the state House of Representatives. The bills are now before the state Senate, so I wrote my state senator, Dennis Kruse (IN-S14), and asked him to vote against increasing the vouchers.

I received responses from Senator Kruse this week. I'll send a reply to his emails, though I doubt it will change anything. Here is what he wrote (different paragraphs are from his response on House Bill 1001 or House Bill 1005) followed by some of what I might say.


Kruse: Thank you for reaching out about House Bill 1005. I value the opinions of my constituents and I value your individual opinion.

Me: Do all politicians start their letters this way? I've talked to this man in person and I know full well that, while he might "value" the opinion of some of his constituents, he doesn't really value mine. Every election cycle, Senator Kruse gets donations from a group called Hoosiers for Quality Education a group funded by former Secretary of Education, and billionaire privatizer, Betsy DeVos. The goal, it seems, is to privatize Indiana's education system.


Kruse: I am committed funding education for Hoosier students. The Indiana 2019-2020 state budget increased $750,000,000 more to K-12 Education than the previous fiscal cycle. That is the largest single increase in state education funding in our 200-year history as a state. This legislative session has just begun. I am excited for the opportunity to review Indiana's current practices and potential amendments.

Me: He says, look at how much money we're spending on education in this state. Am I supposed to be impressed by this? We have given around a billion dollars of public funds to private/religious schools since the voucher plan was put into place in 2011. How was that money spent? No one knows. Who kept track of that money? Maybe the money was spent on new steeples, football fields, or church expansions. There's no way to know because that money is unaccountable.

Should taxpayers fund schools that discriminate against certain students?

Kruse notes that "some public schools are not equipped with the proper resources or staff to address the individual needs of students with disabilities." So instead of dealing with this problem directly by increasing funds to ensure that all public schools are properly supported, we're going to just forget about that and send the money to private schools instead? Why are we sending tax money to private and religious schools if we aren't even able to fully fund our constitutionally mandated public schools?


Kruse: The decision about what school to send your children to is a challenging one for every parent. Choosing not to attend a public school, for most parents, is an opportunity to select the best fit for curriculum for their children.

Me: I'm glad he mentioned the curriculum. Why should taxpayers provide funds for schools that teach religion instead of science or history? Should taxpayers fund students' field trips to the Creation Museum? What about schools whose curriculum materials "whitewash slavery" saying things like, "The majority of slaveholders treated their slaves well"?

Should tax dollars go to schools that teach religion? The Indiana Constitution (Article 1, Section 6) says "NO."


No money shall be drawn from the treasury, for the benefit of any religious or theological institution.

In 2013, despite the Constitutional restriction, the Indiana Supreme Court upheld the state voucher program. They were wrong.


Kruse: While I support school vouchers, I also strongly support public education. Indiana's total state budget designates 61% of funding toward education. 50% of the budget is directly utilized in k12 education, for an annual budget of $9 Billion of the total annual state budget of $18 Billion...

Me: Again, the money he's talking about includes money for private schools and charter schools which he votes to increase every year. Indiana Republicans always, always say that "more than 50% of the budget goes to education." That's true, but hidden in that more than 50% is the money, taken off the top, for private schools. That money should be going to public schools, because the state constitution mandates a system of public schools. It says nothing about supporting a system of private, religious, or privately run schools. Indiana, indeed, no state in the country, can afford to fund three separate school systems (public, charter, and voucher).


Kruse: Accordingly, this legislative session we are currently working to draft the budget proposing an increase to school funding by $438 million. This proposal would result in an approximate $800 raise for teachers over the next two years. I will support this increase and any opportunity to raise public school teacher salaries.

Me: I'm all for increasing Indiana's teachers' salaries. Indiana teachers' salaries have dropped by around 15% (when adjusted for inflation) since 2000. The amount that Senator Kruse notes, though, isn't enough. With another $800 a year, the average salary for Indiana teachers would still be less than all the surrounding states. Now, if he means to increase the salary by $800 a month (for the 10 month school year), that would put the teachers just slightly below where the Governor's Next Level Teacher Compensation Commission, said we needed to be. Finally, and once again, that $438 million increase to school funding includes voucher increases!


Kruse: I am committed to finding ways to support the education of Hoosier students at both private schools and public schools. I believe that school vouchers do not contradict public education. Instead, I believe that parents should have the ability to send their children to the school of their choice.

Me: I know he is committed to finding ways to support private schools. I can't think of one voucher bill that he's voted against since 2011.

Email ThisBlogThis!Share to TwitterShare to FacebookShare to Pinterest
Labels: IN Gen.Assembly, Privatization, vouchers