No Pause in Indiana's Push for Privatization 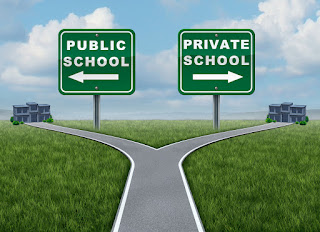 The House version gave nearly 40% of all new education money to the less than 5% of the state's students in the form of increased voucher spending, including money for unaccountable ESAs (educational savings accounts).

It also provided an increase in voucher availability to a family of four making nearly $150,000 a year. This House plan was not the "save poor children" voucher plan that Mitch Daniels proposed ten years ago. It very definitely expanded voucher money for wealthier students.

It's probably good that Indiana Republicans are no longer trying to pretend that their voucher program is so that "poor kids can escape from terrible schools." Instead they're all but admitting that public schools don't interest them. Privatization is the goal no matter what that pesky state constitution says. At least now they're being honest about it.

The Senate still included an increase in vouchers so they're not backing off entirely. Families of four with six figure incomes would be able to get a 90% voucher allowing their kids can enroll in mostly segregated private schools that teach creation science and that slavery was a good investment. This assumes of course, that the school will have their child since private schools can reject students for nearly any reason.

The Senate version, while not as extreme as the House, still contains a significant increase in voucher support, including a foot-in-the-door new ESA plan that lets parents use tax dollars to buy "educational" services without public oversight or accountability. Hmmm...I wonder if they might try to increase money for that in years to come?

HOUSE WILL BE "AGGRESSIVE"

The bill now goes to a conference committee where House members will try to put back what the Senate took out. Speaker of the House Todd Huston, whose campaign contributions include $35,000 from Betsy DeVos's Hoosiers for Quality Education (see also here), said that the house will "be negotiating very aggressively" to get back what was taken out so they can satisfy their lust for privatization.

One might even think that the plan all along was for the House to propose an extreme expansion of vouchers, then have the Senate back off a bit to pacify public school advocates (and more than 170 school boards around the state), and settle on a more "modest" increase in voucher money and an ESA plan.

It's still an increase in Indiana's ever increasing move towards total privatization.


After a chorus of opposition from public school districts and advocates, Indiana Senate Republicans significantly scaled back an expansion of the state’s private school voucher program under their budget proposal Thursday.

The Senate plan would not extend private school vouchers to as many middle-class families as suggested in the House budget proposal and other legislation discussed this session. It also would dramatically curtail a proposal for education savings accounts, which would give stipends to parents of children with special needs who do not attend public schools.


...the Senate budget would partially roll back the ambitious expansion of Indiana’s private school voucher program that was included in the House budget.

Like the House budget, it would create a new K-12 education savings account program, but it would limit participation and costs. Also important: It would remove a House-approved cap on the complexity index, the funding formula feature that favors districts and schools with more disadvantaged students.

Email ThisBlogThis!Share to TwitterShare to FacebookShare to Pinterest
Labels: IN Gen.Assembly, Privatization, vouchers