It’s not as though we don’t know what works

One of the most distressing aspects of the Covid pandemic has been seeing governors and state education officials abdicate responsibility for managing the worst disruption of public schooling in modern history and leaving the heavy lifting to the localities. Virtually every school in the nation closed in March 2020, replacing face-to-face schooling with thrown-together online education or programs that used a disruptive scheduling process to combine the two. Only a small portion of the student body returned to fully opened schools the following fall. The resulting learning setbacks range from grave for all groups of students to catastrophic for poor children.

From the start, elected officials seemed more concerned about reopening bars and restaurants than safely reopening schools that hold the futures of more than 50 million children in their hands. Failed leadership continues to be painfully evident as the states enter yet another pandemic school year without enforcing common-sense public health policies that would make a much-needed return to in-person schooling as safe as possible. These policy failures are compounding at a time when the highly infectious Delta variant is surging and the coronavirus seems likely to become a permanent feature of life. 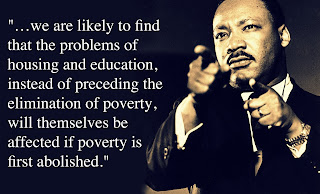 The New York Times editorial from last week, The School Kids Are Not Alright, quoted above, decried the "learning loss" of American students during the pandemic. A closer reading, however, should remind anyone that the "learning loss" is, was, and always has been a feature of inequality -- racism and poverty.

Which parents found it easier to stay home with their children during the school lockdowns? Which parents have (or had) low-wage jobs that we now know are "essential?" Which students had access to the internet for online instruction? Which students often had to share one smartphone among the members of their entire family to get their lessons?

Are current test scores a "scalding rebuke of those who have minimized the impact of the school shutdowns" as the editorial says, or are they simply more of the same. And btw, who among those who wanted to shut down schools to keep families safe has minimized the impact of the pandemic? No one wanted to close schools...least of all educators, but a global pandemic sometimes means that we have to do things that we don't want to do.

The editors wrote, "Perhaps the most grotesque of these minimizing arguments holds that concerns about learning loss are being manufactured by educational testing companies with dollar signs in their eyes."

Is that why the NYT Editorial Board, in looking for sources about "learning loss," started with N.W.E.A. -- a testing company? "NWEA is the company that generated a lot of buzz with their covid-learning loss “research.” NWEA sells standardized math and English testing." Grotesque? I don't think so.

As if that wasn't enough, they also checked with the "educational experts" at McKinsey & Co...because financial consultants always know the best things to do for public education, right? The McKinsey report stated that "the pandemic has widened existing opportunity and achievement gaps and made high schoolers more likely to drop out."

The problem with school achievement has always been poverty. And the problem with poverty is that it's built on racism (Read The Sum of Us, and The Color of Law to get started). It's true that the pandemic made things worse, but that's because during economic declines those at the bottom always suffer most.

Kids who live in poverty, just like their parents, suffered (and still are) more during the pandemic because our economy is a plutocracy made for the rich to get richer. Don't blame teachers, administrators, and school boards for closing schools. The schools closed because we didn't want children to die...or bring home COVID-19 to their parents and grandparents for them to die.

I'm seriously tired of the politicians, pundits (looking at you, NYT Editorial Board), and policy-makers telling teachers and public schools to single-handedly solve the problems of racism and poverty by increasing test scores. Public schools and public school teachers are not the only ones who have anything to contribute to growing our society!

Linda Darling-Hammond had this to say nearly a decade ago.

Why is Congress redlining our schools?


It’s not as though we don’t know what works. We could implement the policies that have reduced the achievement gap and transformed learning outcomes for students in high-achieving nations where government policies largely prevent childhood poverty by guaranteeing housing, healthcare and basic income security. These same strategies were substantially successful in our own nation through the programs and policies of the war on poverty and the Great Society, which dramatically reduced poverty, increased employment, rebuilt depressed communities, invested in preschool and K-12 education in cities and poor rural areas, desegregated schools, funded financial aid for college and invested in teacher training programs that ended teacher shortages. In the 1970s teaching in urban communities was made desirable by the higher-than-average salaries, large scholarships and forgivable loans that subsidized teacher preparation, and by the exciting curriculum and program innovations that federal funding supported in many city school districts.

These efforts led to big improvements in achievement and attainment from the ’60s through the ’80s. The black-white reading gap shrank by two-thirds for 17-year-olds, black high school and college graduation rates more than doubled, and, in 1975, rates of college attendance among whites, blacks and Latinos reached parity for the first and only time before or since.