A Pause in the Ice Storm...Obama, Arne Duncan, and test scores

We interrupt news about the ice storm to drop three items. First, a comment about Obama's nominee for Secretary of Education. If you listened me during the election I frequently said that I did not like Obama's Education policy (what little there was). Now, unfortunately it looks as if he is putting his money where his mouth is. Arne Duncan, CEO of Chicago Public Schools, is going to be our new Secretary of Education. Duncan is not an educator...he's an attorney. His interest is in producing good workers for business interests. More testing...more punishment...more of the same crap we've been forced to step in for the last 8 years.

Third...more about Arne Duncan from the Atlanta Journal-Constitution.
1. Obama Betrays Public Education. Arne Duncan and the Corporate Model of Schooling
Here's Arne Duncan, Obama's nominee for Secretary of Education, rubbing shoulders with the enemy, Margaret Spellings, the current Secretary of Education. Her disdain for public schools is legendary. She's also not an educator. Her qualifications? She's a mom and has had kids in school. Duncan's main qualification is that he's one of Obama's basketball buddies. 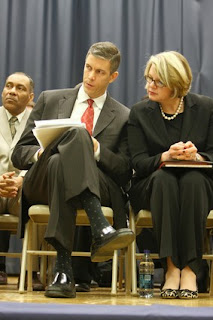 The current "reform" of public education is a travesty and a lie...it's a pretense and we need to stop calling it "reform." It is corporate deception, hidden in the language of civil rights. They're killing our schools.

"It is difficult to understand how Barack Obama can reconcile his vision of change with [Arne] Duncan's history of supporting a corporate vision for school reform and a penchant for extreme zero-tolerance polices - both of which are much closer to the retrograde policies hatched in conservative think tanks such as the Heritage Foundation, Cato Institution, Fordham Foundation, American Enterprise Institute, than to the values of the many millions who voted for the democratic change he promised. As is well known, these think tanks share an agenda not for strengthening public schooling, but for dismantling it and replacing it with a private market in consumable educational services."

Read their entire piece at truthout. It's long, but it's important to see what our next president is going to (continue) to do to public education.

2. A modest proposal from a teacher...

Every politician and appointee seems to have all the answers to our public schools problems. It amazes me how few of these people have actually taught in those schools.

A challenge to President-elect Barack Obama and Education Secretary-designate Arne Duncan [front page, Dec. 17]: Take the entire staff from the worst-performing D.C. school and swap it with the one at the best-performing school. Then see what happens to test scores.

This would be a cheap way to find out whether school reform is worth everything being invested in it. If teachers really are the difference, scores will go up at the bad school and down at the good one. But I think you will find, as most teachers already know, that socioeconomic status
affects scores far more than teaching methods.

The writer is a math teacher with the Department of Defense Education Activity program.

"Duncan’s reforms are steeped in a free-market model of school reform, particularly the notion that school choice and charter and specialty schools will motivate educators to work harder to do better as will penalties for not meeting standards. But research does not support such initiatives. There is evidence that encouraging choice and competition will not raise districtwide achievement, and charter schools in particular are not outperforming regular schools. There is evidence that choice programs actually exacerbate racial segregation. And there is evidence that high-stakes testing increases the drop-out rate."

-----
No Child Left Behind is leaving thousands of children behind!
Dismantle NCLB!
Sign the petition by clicking HERE.
More than 33,000 signatures so far...
Posted by Stu at 5:56 AM

Email ThisBlogThis!Share to TwitterShare to FacebookShare to Pinterest
Labels: Duncan