A nation that destroys its systems of education, degrades its public information, guts its public libraries and turns its airwaves into vehicles for cheap, mindless amusement becomes deaf, dumb and blind. It prizes test scores above critical thinking and literacy. It celebrates rote vocational training and the singular, amoral skill of making money. It churns out stunted human products, lacking the capacity and vocabulary to challenge the assumptions and structures of the corporate state. It funnels them into a caste system of drones and systems managers. It transforms a democratic state into a feudal system of corporate masters and serfs.


A longitudinal study on students enrolled in the Milwaukee Parental Choice Program (MPCP) found little differences between voucher students and those attending Milwaukee Public Schools overall, according to an academic review released today.

Three recent reports of the MPCP, produced by the School Choice Demonstration Project (SCDP) at the University of Arkansas use largely sound methods, but the data they assemble provide little in the way of an endorsement for the 22-year-old school voucher program – the largest urban voucher program in the nation.

The Sham of Teach for America: Part One and Part Two


TFA is one of many insidious examples of how the language of social justice and equity is hijacked and appropriated, and instead employed to further the goals of the neoliberal education reform agenda. This agenda includes a firm belief that education should primarily serve the interests of private profit and as with all neoliberal education reformers, TFA is actively intensifying racial and class inequality, and the destruction of education as an essential public good along with the continued decimation of unions - two institutions that are primary determinants of a democratic society.

PAA to USDE: Listen to parents, change your policies


“Things are very bad in New York City, where we are closing schools rather than improving them. The city is obsessed with testing and parents are sick of it. This has not been an improvement over No Child Left Behind, but simply more of the same from this administration. Parents are not listened to or respected. We object to the Race to the Top program, competitive funding, and a budget that cuts money from key programs that work such as class size reduction. The law needs to be changed so that parents are really listened to.”


...in Texas, some 345 school districts — out of about 1,030 districts — have adopted a resolution that says that standardized tests are “strangling” public schools and asking the state Board of Education to rethink the testing regime. Those school districts represent more than 1.6 million students.

It was in Texas where the era of high-stakes testing was born. George W. Bush started a test-based accountability program when he was governor and then blew it out into a national education initiative known as No Child Left Behind during his presidency.

Thus it is somewhat ironic that this year Robert Scott, the Republican commissioner of education in Texas, caused a public stir when he told the Texas State Board of Education that the mentality that standardized testing is the “end-all, be-all” is a “perversion” of what a quality education should be. California Gov. Jerry Brown had said essentially the same thing last year. Scott also agreed to postpone by a year a requirement that the results of each end-of-course exam account for 15 percent of a student’s final grade in that course.

Duncan's ED: We Need to Double Down on Irrational and Unscientific Practices


An email from Monty Neill alerted me to the latest development by today's Corporate Stalinists at ED to judge teacher education programs on the basis value-added test scores of students who are taught by the graduates of these teacher ed programs. Got that? No, it's too late for April Fool's.

How to Privatize Public Education in 12 Easy Steps


1) Manufacture a crisis and instill public fear. Waiting for Superman.

2) Create a rallying cry for the need for ACTION to save citizens from some danger – which involves eliminating those posing a threat. In this case, public educators. Bring in your own “private” troops (Blackwater? No. Teach for America and people trained at new “innovative leadership centers”)

3) Create a system which becomes a self fulfilling prophecy. High stakes testing policies which will doom schools and children to failure. A convenient way to “prove” the grounds for #’s 1 and 2.

4) Use of “savior” language – sound bite messages which co opt terms which average people identify as favorable such as “innovation,” “reform,” and “choice.”

Jack Hassard: The Testing Games put our Youth at Risk


Because of NCLB testing requirements, many school districts have had to divert resources away from teaching and learning and into their testing and assessment budget. There is also an enormous loss of instructional time. So many schools are caught up in teaching to the test, and many schools take weeks to prepare students for The Testing Games. Because we test in only a few areas, the curriculum is narrowed as teachers are forced to prepare their students in limited areas such as mathematics and reading.

Testing is out of control not only in the sense of administering tests. There are consequences to testing that include shipment costs, scoring services, reporting scores, and then implementing educational service to schools whose students didn't do well, and put the school at risk by not meeting AYP goals.

Talking pineapple question on state exam stumps ... everyone! Students, teachers, principals -- no one has any idea what the deal is


"It's hilarious on the face of it that anybody creating a test would use a passage of mine, because I'm an advocate of nonsense," Daniel Pinkwater, the renowned children's author and accidental exam writer, said in an interview. "I believe that things mean things, but they don't have assigned meanings."

"Puzzle: How did our nation get to be most powerful in world before NCLB and RTTT? Before ubiquity of standardized testing?" - @DianeRavitch 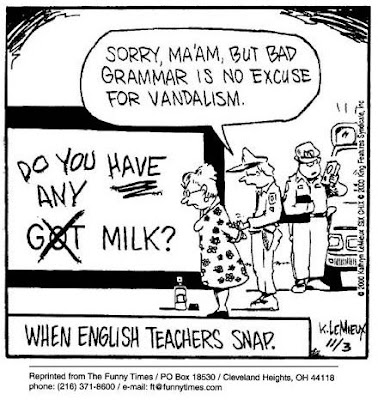