How the House GOP budget would hurt kids

House Republicans have touted their budget as a prescription for economic growth that will return the United States economy to prosperity. In reality, as ThinkProgress has documented, the GOP budget slashes social spending on programs that protect the most vulnerable while giving more than $3 trillion in tax breaks to the wealthiest among us — and even after all that, it not only fails to reduce the national debt but actually adds to it.

More than 60 percent of the spending cuts in the GOP budget would come from programs that benefit the poor, including food assistance, Women, Infant, and Children programs, and potentially even tax credits that have huge effects on poverty and hunger. Those cuts would undoubtedly not only hurt adults in struggling families, but harm children as well. According to a new report from the Half In Ten project at the Center for American Progress, millions of children will lose assistance from a number of services, as the following infographic shows: 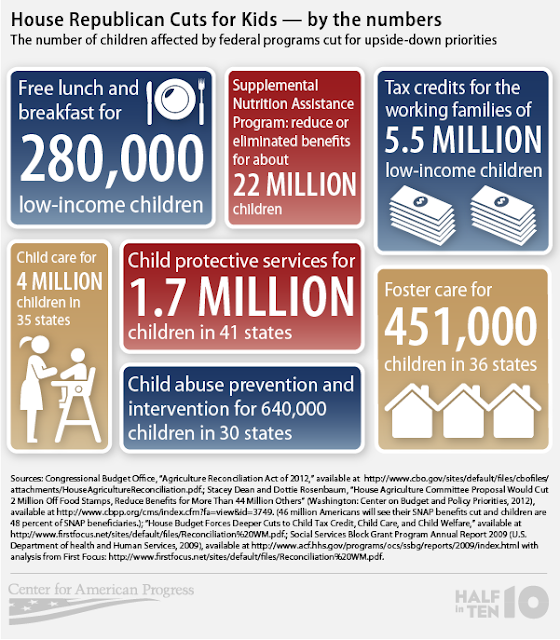 As Half In Ten’s Melissa Boteach noted yesterday, the GOP budget would also boot nearly 280,000 children from school lunch programs, even while protecting a massive tax break for multimillionaires.

Under the guise of creating economic prosperity, Republicans have pursued a tax-and-cut ideology with reckless abandon over the last two years, taking the axe to vital social safety net programs while also cutting tax rates on the wealthy. The casualties of the Republican agenda, however, are not numbers on a chart — they are poor kids who are struggling to survive.

When are we going to hold legislators accountable for the damage they do to children? The people who are proposing these cuts for poor Americans are the same people who blame public schools, teachers and unions for low achievement. A child poverty rate of over 20% is high enough. It's time to change directions!