Is teacher tenure a myth?


...what a teacher does to a data system will always fail to capture the breadth and depth of what happens in a classroom.

There are, of course, plenty of awful teachers who shouldn’t spend another day in the classroom. And it should be easier for these teachers to be removed.

But that doesn’t mean that teachers shouldn’t have due process, which is really all tenure ensures.

Another Loss for the UFT and Teachers

Have the teachers unions given up?


...no other union has their evaluations published. Now, we will. The UFT will claim that only parents will get to see this info, but there is nothing to stop parents from sharing and publishing this information themselves. This will lead to more teachers being vilified due to faulty evaluations with a margin of error of more than 80%.

Something else about parent trigger laws...


I wonder why parent trigger laws never include the right of charter school parents to "seize control" of their school and give it back to the public system.


...business interests have realized that while pretending to create educational answers for poor children, profit could be accumulated by destroying public schools, privatizing education, and creating another version of "corporate socialism," i.e., public money going into private hands. However, while it is important to combat this additional funneling of money upward, Willhelm's insight explains the chief engine driving one educational charade after another: the poor have little economic value to the rich. If most of today's more than 15 million poor children were suddenly to disappear, business leaders and the politicians who serve them would respond with initial expressions of pain and sadness, then quickly add: "but doesn't this mean we can now further reduce domestic spending?"

Without social activism that will confront and change the economic system that has generated one educational reform charade after another, continued generations of poor children will be doomed to wretched adulthood.

Public school funds keep getting cut...yet they're supposed to compete with corporate welfare recipients like this...What's wrong with this picture?


Even in public education, the rich keep getting richer.

That's the message the trustees of the State University of New York will send Monday when they vote to approve a huge 50% increase in the per-pupil management fee of one of the city's wealthiest, biggest-spending and most controversial charter school operators.

The Success Academy Charter Schools Inc., run by former City Councilwoman Eva Moskowitz, applied in April for an increase from $1,350 to $2,000 in the annual per student payment it receives from the state to run 10 of its charter schools.

...This will all come as a huge surprise to anyone who has bothered to examine Success Academy's financial reports or who has witnessed firsthand its almost limitless spending .

...The Success Network, in fact, is a fund-raising colossus, having received $28 million from dozens of foundations and wealthy investors the past six years, and millions more in state and federal grants.

On its annual tax forms, it has continually reported huge year-end surpluses for both itself and its individual schools. Those combined surpluses currently stand at more $23.5 million.

Hardly the picture of financial woe.

Support for free universal public education in the United States

The fight is not against Charters or Private Schools...or even lack of funding for public schools. The fight is between those people who want to continue to support a public school system in the United States and those to whom a public education system is anathema. Some interesting quotes (emphasis added)... 


The whole people must take upon themselves the education for the whole people and be willing to bear the expenses of it. There should not be a district of one mile square, without a school in it, not founded by a charitable individual, but maintained at the public expense of the people themselves. -- John Adams, US President, Letter to John Jebb, 1785

The good education of youth has been esteemed by wise men in all ages, as the surest foundation of the happiness of both private families and of commonwealths. Almost all governments have therefore made it a principal object of their attention, to establish and endow with proper revenues, such seminaries of learning, as might supply the succeeding age with men qualified to serve the publick with honour to themselves and to their country. -- Benjamin Franklin, US Statesman, Proposals Related to the Education of Youth in Pennsylvania, 1749

What the best and wisest parent wants for his own child, that must the community want for all of its children. Any other ideal for our schools is narrow and unlovely; acted upon, it destroys our democracy. -- John Dewey, education philosopher, The School and Society, 1907


And yet, if we believe what we see and hear in the media, the myriad problems with our public schools—from low test scores to a 25-percent drop-out rate—are the fault of incompetent teachers and their “powerful” teachers’ union. No one dares blame the kids or the parents. It’s the teachers who are the villains...Which is why so many teachers are reluctantly leaving the profession. This smear campaign is actually forcing good teachers to change careers because they no longer feel it’s worth the aggravation. Teaching is demanding enough without being accused of incompetence. So we’re forcing them out. Is this a great country or what? 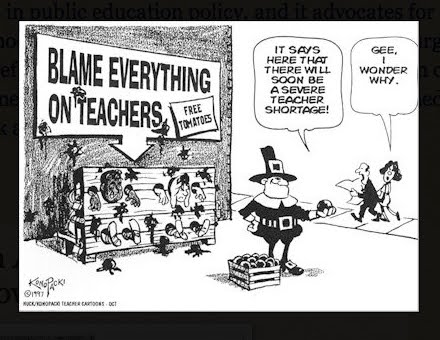 
If there's one constant in the debate over how to improve failing schools, it's the demand to get rid of bad teachers and replace them with good ones...Reformers will be quick to assert that if teachers aren't up to the challenge, they shouldn't be in the classroom. In other words, let's not worry about losing these teachers. It's the students who deserve our concern. Yet they are precisely the ones who are hurt when teacher turnover is high. A new study titled "How Teacher Turnover Hurts Student Achievement" found that the morale and the culture of the school is negatively affected by teacher churn...No amount of money or pleading will prevent exemplary teachers from leaving. Their physical and mental health has to come first. Reformers can talk all they want about ways to address the alarming rate of departure of teachers. But unless they've taught in a public school, they can't begin to understand what's going on.

I Don't Want to be a Teacher Any More


Never once in the past 34 years of teaching did I ever want to quit. I even told my husband that if we won the lottery, I’d keep teaching. My students would just have all their own computers, art supplies galore, and any book we wanted to read as a class.

A comment on teacher turnover and the privatization of public education.


Don't it always seem to go,
That you don't know what you've got til it's gone