Doubling Down on Privatization

RISE ABOVE THE MARK

Last Friday night I traveled to Butler University in Indianapolis and attended a presentation of Rise Above the Mark, a documentary developed by the West Lafayette Schools Education Foundation, which shines a light on the damage that privatization is doing to public education in Indiana and the nation. [Sponsors of the film's presentation were Butler University, Kappa Delta Pi, International Honor Society in Education and Kroger.]

After the movie we listened to a panel discussion about the privatization movement. Upon her introduction Diane Ravitch, who was one of the interviewees in the film, received a standing ovation from the obviously partisan crowd. In it's report of event, the Indianapolis Star wrote,


It was a two-sided debate in front of an audience hooting for one side.

That's true. The crowd was strongly biased against the privatizers and during the evening comments from Ravitch and Fort Wayne Community Schools Superintendent Wendy Robinson were received with cheers and whistles.

Here's the first of three videos containing the entire discussion. View them all at Rise Above the Mark -- February 28, 2014, Butler University

One of the last comments of the evening came from "reformer" David Harris, founder and CEO of The Mind Trust. He said,


One of the reasons that [reform] initiatives have gained so much currency, particularly charter schools, is that they are bipartisan issues. No one did more to launch charter schools in this country than Bill Clinton and no one has been a bigger advocate for charter schools than Barack Obama. This is an issue that is...the education reform community is actually an area where Republicans and Democrats are coming together. The Washington Post did an editorial shortly after [New York City] Mayor [Bill] de Blasio's election that said nothing is less progressive than the efforts against education reform. [emphasis added]

When he was running for his first term (2007), candidate Obama spoke about NCLB and told the NEA,


Don't label a school as failing one day and then throw your hands up and walk away from it the next. Don't tell us that the only way to teach a child is to spend too much of a year preparing him to fill out a few bubbles in a standardized test...You didn't devote your lives to testing. You devoted it to teaching, and teaching is what you should be allowed to do.

Four years later he spoke at a town hall and said,


Too often what we have been doing is using these tests to punish students or to, in some cases, punish schools...

When he was running for president he consistently criticized "teaching to the test" and supported a well rounded curriculum.

Yet throughout his first term and continuing into the second, he has, under the leadership of his Secretary of Education, Arne Duncan, pushed the national education debate in favor of the corporate education reform industry.

In the Duncan Department of Education, standardized testing has been given even more weight than under the McGraw-Hill friendly Bush administration. Not only are students ranked and schools rewarded and punished based on test scores, but the Obama/Duncan administration has pushed the concept of evaluating teachers based on student test scores.

If anything was designed specifically to encourage teaching to the test, then Race to the Top is it...despite President Obama's words.

President Obama, as a candidate, gave us the impression that he didn't favor the excessive testing which has done so much damage to America's public schools over the last 30 years. His actions, however, haven't matched his words and, as President, he has done as much damage to public education as any Republican would have.

A FOX IN THE HEN HOUSE

So it's disappointing, but not surprising that he has doubled down on his damaging policy and announced the appointment of a leading privatizer to be second in command at the U.S. Department of Education. 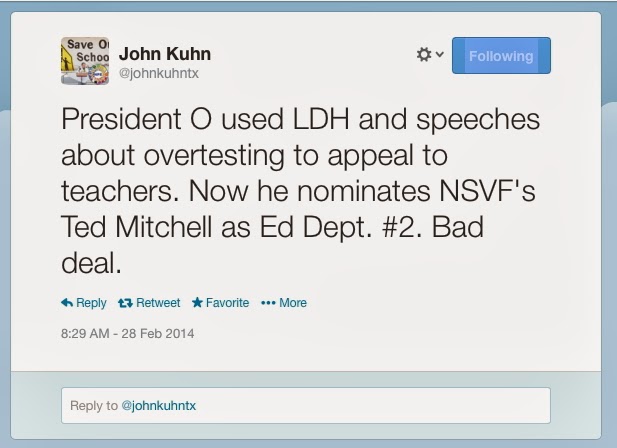 In her article, Obama Picks Leader of Privatization Movement to be #2 in U.S. Department of Education, Diane Ravitch says of the nominee, Ted Mitchell...


He is a key figure in the corporate reform movement to transform public education and transfer public funds to private management, as well as to spur entrepreneurial activity and the involvement of the for-profit sector in public education.

President Obama has nominated him to be Undersecretary of Education, the second most powerful job in the department.

The article quoted by Ravitch, The Education of Ted Mitchell, says...


In many ways, the Mitchell nomination reflects the ongoing battle being fought in Washington and in school districts across the country. It’s a battle that pits the views of teachers, their unions and community groups against a movement that is backed by wealthy philanthropists and corporations...

...critics like Ravitch say that Mitchell and NewSchools Venture Fund are in the forefront of a movement to privatize public education, a radical transformation that would benefit technology, testing and textbook companies such as Pearson, the London-headquartered multinational publishing and education giant.

“This does look like a signal that President Obama is continuing to place more bets with the reform crowd,” he says.


...[the] two major party politicians are like members of the canine family. Republicans, he said, are wolves: it's clear where they stand on the issues. Their disdain for public education is open and vicious. On the other hand, the Democrats are like foxes: they smile at you to make you think they're your friends – and then, when you least expect it, they devour you.

I'm not suggesting to those who are fighting the privatization of public education that they ignore what their local politicians have done when election time rolls around next November. However, we must remember that no matter what the partisan label a politician has next to his or her name the campaign contributions from the Broads, Gates, Waltons and other school "reformers" will go a long way towards corporatizing politicians of both parties.

The corporate takeover of public education is bipartisan. Work for the defeat of the "wolves," but beware of the "foxes."

It's time to get the foxes out of the hen house...


"There is a place in America to take a stand: it is public education. It is the underpinning of our cultural and political system. It is the great common ground. Public education after all is the engine that moves us as a society toward a common destiny... It is in public education that the American dream begins to take shape." -- Tom Brokaw