Musical Interlude: It's Got That Swing

I'm not going to write a lot about him other than to say that his music influenced me as a teen. There's quite a bit of biographical information on the web if you're interested. Some interesting reads are...
NOW, THE GOOD PART

The first clip is from the documentary by Ken Burns, Jazz. It's a short clip of Ellington playing his first composition, "Soda Fountain Rag."

Two of Ellington's signature pieces...the first, "It Don't Mean a Thing (If It Ain't Got That Swing)" -- this version is Ellington's orchestra with Louis Armstrong. You can only listen to on YouTube (click the image to listen), but it's worth it...

Louis Armstrong and Duke Ellington: "It Don't Mean a Thing (If It Ain't Got That Swing)" 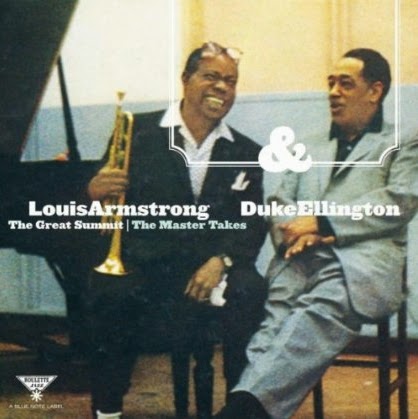 Finally, a late version (1964) of "Take the "A" Train." During the introduction Ellington introduces his arranger and collaborator, Billy Strayhorn. Music starts at about 1:25. Vocal by Ernie Shepard.