We Don't Need No Stinkin' Experts

Democrats and Republicans are both well entrenched in education "reform" (Note, however, the recent formation of Democrats for Public Education...perhaps a counter to DFER?). Democrats like Obama (through Duncan), Emanuel , Booker and Polis (among others) rival Republicans G. W. Bush (through Spellings), J. Bush, and Christie (among others) in their attack on public schools and public school teachers. Both political parties seem to agree that public education needs to be privatized and public educators need to be de-unionized and silenced.

This bipartisan effort to privatize public education and silence public educators is supported by major cable media outlets (this is not to say that other major media outlets are much different). Media Matters looked at the number of educators who were included in discussions about American education on cable news shows from January 1, 2014 through October 31, 2014.


On segments in which there was a substantial discussion of domestic education policy between January 1, 2014, and October 31, 2014, there were 185 guests total on CNN, MSNBC, and Fox, only 16 of whom were educators, or 9 percent...

Rather than rely on classroom experts when discussing education policy, the media spotlights people who have no experience in the classroom, no training in child development or the art and practice of teaching, and no clue what it means to spend a career helping children learn. Perhaps one of the comments on the Media Matters page is true...


Well, most of us teachers are too swamped with grading, planning, paperwork, parent-teacher conferences, observations, and way too understaffed to take time off to appear on some show just to get tongue lashed by some pundit who thinks they know how to do the job. 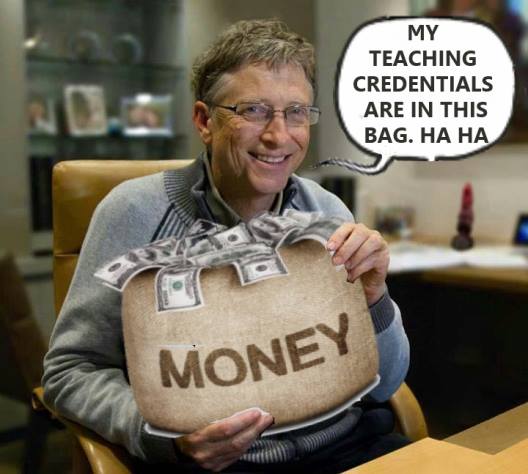 More likely is the fact that teachers, as a group, are politically disrespected (the main exceptions being themselves and their students' parents) in the U.S.

Fifty years ago, Richard Hofstadter won the pulitzer prize for his exploration of America's anti-intellectualism in Anti-Intellectualism in American Life. Hofstadter said that the U.S. was unique among Western nations in that its citizens' resented and mistrusted those who follow "the life of the mind" - i.e. academia and education. The 50's were, according to Hofstadter, a peak in the cyclical anti-intellectual trend in the U.S. McCarthy's attacks were in large part directed against intellectuals and universities. Words like, "Ivory Tower" and "Egghead" were part of the campaign to defeat Adlai Stevenson and the "work of the mind" was held in a lower esteem than was business, industry and physical labor.

Anti-intellectualism is not unique to the 50's, though. The trend runs through American history sometimes boldly, sometimes hidden below the surface. Hofstadter discussed the cyclical nature of the trend and claimed that peaks in the cycle were due to the rise in importance of the very intellectuals who were resented...


...the resentment from which the intellectual has suffered in our time is a manifestation not of the decline in his position but of his increasing prominence.

In other words, as intellectuals become more noticeable and visible in our society, resentment and anti-intellectualism will grow. 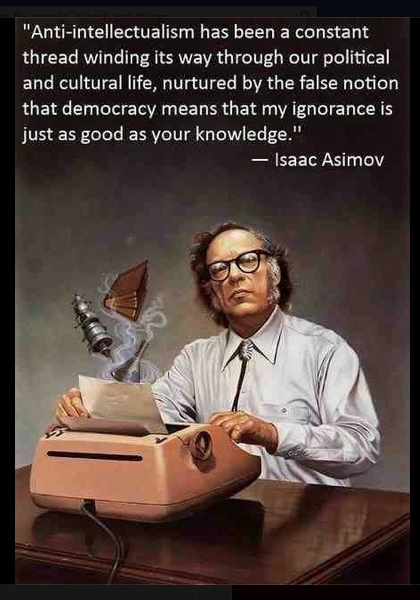 This is one of the reasons why educators in general, and public school teachers in particular, have never had high status in the U.S. (as opposed to other western nations). Furthermore, the fact that, in the U.S., education is, by some, considered "women's work," adds to the low status. Women have yet to be fully respected in our society. While individuals may vary in their opinion of "women's work" it's clear that there is a large segment of the population who believe that women don't deserve the respect, status, and/or wages, that men do.

Low status is self-perpetuating. O. Alan Weltzien, a professor at the University of Montana, reviewed Hofstadter's book in 2008. He wrote...


The low status of schoolteachers and low opinion of teacher education programs [which Hofstadter] describes needs no additional comment. He unflinchingly states the consequences for his overall subject: "In so far as the teacher stands before his pupils as a surrogate of the intellectual life and its rewards, he unwittingly makes this life appear altogether unattractive."

An indication of this distrust of "experts" is the anti-science attitude of many Americans and their political representatives...in this case, most specifically, on the Republican side. A quarter of all Americans refuse to accept the science of climate change...and more than 40% of Americans believe the creationist view of human origins. [Evolution is just a "theory" after all, they say. One wonders, then, whether they deny the Germ Theory of disease or the Theory of Gravity!].

Most recently, House Republicans passed a bill (which, even if it passes the Senate, is likely to be vetoed) which forbids scientists from "influencing" the EPA with their research. Instead, "industry experts" will be allowed to advise the EPA...the proverbial fox guarding the chicken house.


Speaking on the House floor Tuesday, Rep. Jim McGovern, D-Mass., summed up what was going on: “I get it, you don’t like science,” he told bill sponsor Rep. Chris Stewart, R-Utah. “And you don’t like science that interferes with the interests of your corporate clients. But we need science to protect public health and the environment.” [emphasis added]

It's true that some of the motivation behind the bill isn't anti-science, but rather pro corporate profits. The point is, however, that it passed because the house is filled with a new crop of science deniers. [For an entertaining look at how John Stewart responds to science deniers in the house see HERE. This was done before the midterm elections in 2014, however, the congressmen he targets for his humor are still there.]

The dislike of public education by the political and religious right wing has never been a secret. There was a time, though, when Republicans used "improved education" and "saving tax dollars" as arguments for "choice," charters, and vouchers. Now, however, with charters and voucher accepting private schools showing no tax savings and no academic improvement over traditional public schools, the argument has become "choice for the sake of choice."

The American tendency towards anti-intellectualism is, unsurprisingly, being exploited for corporate and political advantage. Like the recent political attack on scientists within the EPA, the corporate attack on public school teachers is intended to rally anti-intellectual feelings of resentment and jealousy against teachers and the institution they represent. The pervasiveness of public school teachers in America...more than 3 million nationwide spread over every political district...means that the corporate privatizers are up against a possible huge backlash of activism and political clout. Weakening educators is necessary if privatizers want to get their hands on the billions of dollars in tax money going to public education. 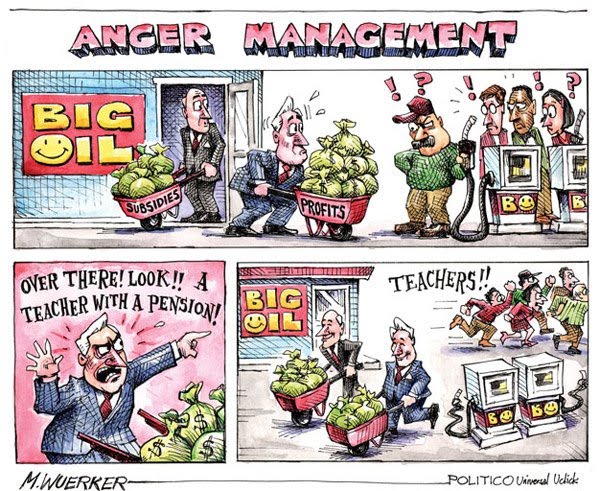