I spent a week in the hospital during Spring Vacation. Now that I'm home I'm trying to catch up on what's happening in GERM (Global Education Reform Movement), as well as the annual damage to Indiana's public education by Governor Pence, the State Board of Education, and the Indiana General Assembly.

In the meantime here are some comments of mine from 2006, the year I started this blog. Notice how little has changed since then; Privatization of public education, obsessive focus on standards and testing, and blaming public education for the economic ills of society has been a constant...

One size fits all. The test is all that matters...consistently for decades.


Is it possible that you might have a student who works hard, does all of his or her assignments, completes homework, passes classroom assessments, yet fails the standardized test for whatever reason? It doesn't matter. Everyone has to pass the test...and if they don't, no amount of make up work, or daily achievement will matter. Everyone has to be the same.

The new slogan in American education...One size fits all. Everyone is - or has to be - identical. There's no room for an Edison, an Einstein, or a Mozart. Pass the test...pass the test...don't worry about anything else...

A Must Read - Jonathan Kozol

Shame of the Nation is not Jonathan Kozol's most recent book, but it's one of his most important contributions. The extended title, The Restoration of Apartheid Schooling in America, correctly identifies what the nation's high child poverty levels, the expanding economic gap, and the re-segregation of schools caused by the charter school movement, are doing to public education.


When you read [Jonathan Kozol's book, Shame of the Nation] he'll show you how the Civil Rights movement of the 60's led to integrated schools in various places around the country. He'll also show you how those schools were successful in closing the black/white achievement gap. Finally, he'll show you how we have lost nearly all of that to re-segregated school systems...worse than before in many places. 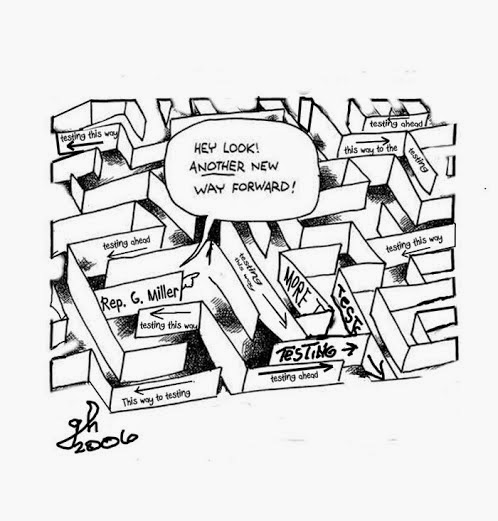 
No child left behind is the logical outgrowth of the now discredited report "A Nation at Risk." It is no mistake that the errors in that report were quashed by the Reagan administration.* Yet the myths of that era were embraced by the nation by Democrats as well. Bill Clinton was just as eager to develop a "national curruculum" as the Republicans. His administration was just as quick to call for the grade retention of students who didn't pass "the test" as the Republicans. He was just as willing to use standardized testing as the benchmark from which all school results are gathered and compared as are the Republicans.

We don't have the luxury of being sick of complaining about NCLB. The students who are under our care are being damaged right now. If we sit back and wait for things to change who will be the voice of the students who are being pushed to drop out so their low test scores won't effect AYP? Who will be the voice of the 5 year olds who are being drilled and killed so they can improve their DIBELS scores?

The Zen of Public Schools

The last sentence is the most important one in this passage and it's one I've repeated over and over again. No one in the nation is taking responsibility for our economic gap and high child poverty. The public schools are being blamed for the failure of our nation to solve its social and economic problems...


...the state wants public schools to be, as Bill Moyers put it, "the permanent emergency rooms of our country's dysfunctional social order. They are expected to compensate for what families, communities, and culture fail to do."

Social scientists, politicians, parents, the media, even many educators believe there's a "crisis" in education - especially in the public schools. I don't think that's true. I think the crisis is in society and since no one wants to take responsibility for the enormous inequities in our society, it is blamed on the public schools.

ONE SIZE DOES NOT FIT ALL

Education researcher Richard Allington reminded us that one size does not fit all because children are different people and learn in different ways. The obsessive focus on a single test or set of standards defining what a "child ought to know" shortchanges the education of all children.


“Our current ‘scientific’ method focuses almost exclusively on identifying what works best generally, [but] children differ. Therein lies what worries me about ‘evidence-based’ policy making in education. Good teaching, effective teaching, is not just about using whatever science says ‘usually’ works best. It is all about finding out what works best for the individual child and the group of children in front of you.” -- Richard Allington

Edison, Einstein, and Everyone else


Edison and Einstein were highly intelligent, yet were branded as failures at school. They were, however, able to persevere and eventually their lives were marked by great achievement. The damage done to students by our current test-crazed culture is that low achievers who have high ability are labeled failures and not all of them will be able to overcome the emotional and social impact of that label.

If we don't recognize students of ability no matter what their achievement, then the Einsteins and Edisons in our classrooms today may be silent in the future.