The Testing Circus: Whose Fault Is It?

Testing is being overused and misused. "Reformers" don't object to this...in fact, the overuse and misuse of testing is the tool of choice for the dismantling of public education and the profitization of the education "industry." Standardized testing is the very tool needed to prove that public schools are failing and that public school teachers are incompetent. It doesn't matter if the science is bad (VAM) or if the tests are inappropriate, unreliable, and invalid. All they need is a number for their sound bites.


...reformsters, who knew all along that the test would be their instrument to drive instruction, have pretended to be surprised testing has driven instruction and pep rallies and shirts. They said, "Get high test scores, or else," and a huge number of schools said, "Yessir!" and pitched some tents and hired some acrobats and lion tamers. Oddly enough, the clowns were already in place. 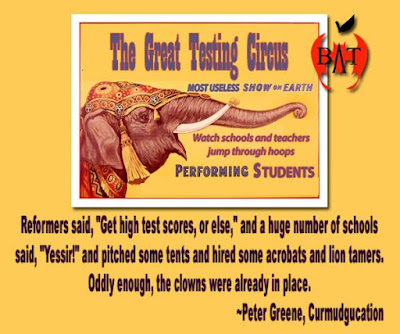 
Mississippi is just open more example of a state that thinks eighth-year-olds need to be pummeled mercilessly so that they will stop holding out, because clearly any third grader who can't pass a Big Standardized Reading Test must not have been threatened enough. Clearly some folks believe that once facing the prospect of failure, a nation of third graders will declare, "Well, then, I'll stop messing around and learn how to read, because previously I had no interest in learning that fundamental skill-- at last not as much as I wanted to get into fourth grade." Yes, surely that's what will happen.

'Public education is the foundation of a democratic society'

Those of us who believe that public education is a public good need to speak out. There are those who believe that the only "public good" is selfishness and "every man for himself." Societies benefit from an educated populace and therefore should support a system of universal, publicly funded education.

I Believe in Freedom of Choice

When it comes to education, there is a simple rule: public money for free, democratically controlled schools, private money for private, privately-controlled, and religious schools.

The Cost of Child Poverty

Poverty and inequity are a serious and real problem in the U.S. (and throughout the world). Societies which reduce poverty are better able to deal with other issues like universal education and health care. It's not surprising that the countries with the happiest people are the same countries with the lowest levels of poverty.

from Jeff Madrick in New York Review of Books


...years of research have made clear the direct connection between childhood poverty and social dysfunction, ranging from poor health outcomes to higher incarceration rates. Dozens of studies have reported that poor kids are more likely to have learning disabilities, language delays, behavioral problems, and to contract diseases such as asthma and diabetes. They tend not to do as well at school and are more likely to drop out of high school, or even grade school. Women more often have babies in their teenage years. The Children’s Defense Fund says the path to prison is often paved in these years. And, most important, neurologists have found virtually incontrovertible evidence that high levels of stress experienced from birth to the age of three can actually damage brain architecture...

All Teachers Are Assumed To Be Bad, But What If Everything You Do Works?


Education is looked upon by the American public as being a failure. People have it in their heads that things couldn’t get any worse when in fact things might actually be better than they’ve ever been. That is what Diane Ravitch’s last book was about: We’re actually doing a better job of educating EVERYONE than at any point in human history.

Then, in 2012, some of us weren't fooled when NEA and AFT endorsed President Obama and his terrible education policies. That was a serious mistake.

Everyone who is supportive of public education as a public good can't afford to be fooled again.


As we enter the campaign for the 2016 presidential race, educators and students are looking for a candidate willing to buck some very powerful trends. In 2008, we were led to believe that Obama would break with the disastrous policies of GW Bush, and bring an end to No Child Left Behind. But instead of change, we got NCLB on steroids through Duncan’s Race to the Top and NCLB waiver program. I think I speak for many when I say we will not be fooled again.

From John Kuhn in Heal Our Schools


Government officials, they never meet the child. They never see the child, speak to the child, touch the child. But they make policies that do leave their fingerprints on these children.