Jennifer Higgins: I Am Not a “Developing” Teacher

Diane Ravitch posted yet another letter from a teacher who has decided to quit rather than punish herself for not being able to overcome the pain and cognitive dissonance of "education reform." Ravitch's comments before she reproduced the letter opened up a mild fire-storm in the comments section. Should you quit if you "can't take it any more" or does that mean that "the reformers have won?" Diane said the latter, although I think she meant her words to be encouraging people to stay...rather than disparagement of those who choose to leave.

There's a very interesting, sometimes heated, discussion in the comments which follow...


I have gotten to a point where I hate posting statements by teachers who are giving up because of stupid mandates and idiotic “reforms.” I don’t want anyone to quit. I want teachers to stay and fight for themselves, their students, their profession. At the same time, I understand that sometimes people reach a breaking point, and they can’t take it anymore.

The only good thing about these statements is that they tell the world about the damage done by ill-informed, misguided, punitive “reforms.” We can’t afford to drive good teachers away, yet that’s what current metrics are doing.

Here is a statement by Jennifer Higgins. She knows she’s a terrific teacher, but the data say she’s not. I hope she fights back. Don’t let the reformers win. If you quit, they win.

VAM, or Value-Added Modeling, has been shown to be unreliable and invalid, yet states around the nation, at the insistence of the US DOE, have been using VAM variations to evaluate teachers.


Conclusion: VAM is not reliable or valid, and VAM-based polices are not cost-effective for the purpose of raising student achievement and increasing earnings by terminating large numbers of low-performing teachers.

TEACHERS ARE NOT THE PROBLEM

Teachers in the United States are not the Problem

American teachers are regularly blamed for our "failing" schools. The obsession with "getting rid of bad teachers" has taken the attention away from the real problem which is the high rate of childhood poverty in the US.

The Organization for Economic Co-operation and Development (OECD), sends out the Teaching and Learning International Survey (TALIS) every few years. The most recent one was done in 2013 and the results are now available. The survey covers how teachers feel about their jobs.

Some things I noticed...
Here are some of the findings...


As you can see U.S. teachers spend more time at their job compared to teachers in other countries. More importantly OECD found several important differences that affect student outcomes. 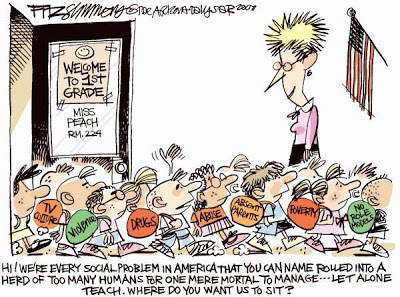 Effects of Inequality and Poverty vs. Teachers and Schooling on America’s Youth

Inequality hurts everyone...those who ignore it for short term gain will lose in the long run...


I think everyone in the USA, of any political party, understands that poverty hurts families and affects student performance at the schools their children attend. But the bigger problem for our political leaders and citizens to recognize is that inequality hurts everyone in society, the wealthy and the poor alike. History teaches us that when income inequalities are large, they are tolerated by the poor for only so long. Then there is an eruption, and it is often bloody! Both logic and research suggest that economic policies that reduce income inequality throughout the United States are quite likely to improve education a lot, but even more than that, such policies might once again establish this nation as a beacon on a hill, and not merely a light that shines for some, but not for all of our citizens.

Failure is a feature of standardized tests. Cut scores have become political tools.

From the initial post of 2015, Wait, What? has been sounding the alarm about the unfair, inappropriate and discriminatory nature of the SBAC testing scheme.

"You are going to see huge outcry, and I can certainly envision a scenario where teachers are very unjustly attacked for this process," said Chris Clayton, assistant director for education services at PSEA. "You have essentially moved the target for teachers to get their students to, and then you raised the bar with these cut scores, all in combination with funding cuts."

A bill that would tie teacher furloughs to the new teacher evaluation system has passed the state House of Representatives.

Another bill that would push back the state's standardized-test graduation requirement until 2019 has passed the Senate.

In concert, if advanced, these bills would give students less motivation to perform well on tests while holding teachers more accountable for student results.

"It's almost like a perfect recipe to attack teachers in many ways," said Clayton.

Iowa reform pushes students to read earlier - or else

Iowa joins the ranks of those states which punish third graders who struggle with reading.


Retention laws are seen as a way to stop students from advancing a grade level without merit, a practice known as social promotion. Since the late 1990s, there's been a focus across the nation on ensuring high school diplomas have validity and meaning.

But experts and educators have voiced concerns about the social and emotional effect of holding back students. A 2005 study found that repeating a grade for sixth-graders is as traumatic as losing a parent or going blind.

However, proponents point to a key part of Iowa's legislation: allowing students to progress to fourth grade if they attend a summer reading program, which is expected to incorporate teaching strategies that use some of the latest literacy research.

States such as Florida have stricter remediation laws, allowing students to progress only if they can demonstrate through a test or portfolio that they're not behind.

Iowa also allows "good cause" exemptions, such as if students have less than two years of instruction in English-as-a-second-language programs, do not take state exams because of a disability or demonstrate in another way that they are reading at grade level, such as through a portfolio.

Education: the Next Corporate Frontier


Privatization exists in different forms, including vouchers, public private partnerships, low-fee private schools, and charter schools. Whatever it’s called, it amounts to the same thing: private corporations gaining control of and profiting from an essential public function. In every country, the identical argument is used: public schools are failing, reform is needed and big business will do it best, providing choice and efficiency. If the statistics don’t match the argument, they are concealed or doctored to fit.

The "Confederate Battle Flag" issue in South Carolina (and elsewhere) is not the only indication that we're still fighting the Civil War.


The Texas version of history could rewrite the story for all American school children...

We have moved away from listening to teachers and listening to experts from our colleges and universities about what kids need when they graduate...what do they need to be successful in colleges and jobs. That's where the emphasis needs to be.

And when it comes to history I think that the emphasis on facts and figures and certainly the politicized emphasis in Texas means that students aren't understanding why we study history which is about understanding ourselves today as much as it is understanding 150 years ago...