On the other hand, Trump's numbers soared after he badmouthed immigrants. Perhaps Christie's numbers will increase when Republicans see how much he hates unions and teachers.

Was Chris Christie bullied as a child...and his teacher failed to protect him? Is that why he hates teachers so much?

In any case, the best response to the New Jersey Bully has been...

from Russ on Reading


"I regret that I have only one face to give for my profession."

Indiana: Charter Advocate Says It is Time to Close Down Low-Performing Charters

People are starting to see that Charters are no better than real public schools. Thirty percent of Detroit's charters have closed because they "failed."

In Indiana, someone has noticed that charter schools are not doing any better than our real public schools -- and, in many cases, a lot worse.


The hype, spin, and empty promises of the charter movement have run their course. Teach for America’s claims that its inexperienced kids could close the achievement gap are obviously hollow. Chris Barbic’s Achievement School District in Tennessee is a failure. The chickens are coming home to roost. You can’t fool all the people all the time.

Test and Punish and Civil Rights

Has any teacher ever said, "I won't have any idea if my students are learning without standardized test scores."


Actually, test scores don't tell us much of anything, because the Big Standardized Tests are narrowly focused, poorly designed, and extremely limited in their scope. Furthermore, we can predict test score results pretty well just using demographic information. So to claim that we would be fumbling in the dark without these tests, with no idea of how to find schools that were in trouble, is simply ridiculous.

Schools around the nation are facing a teacher shortage and many will have to rely on substitutes. Just one problem...there's a shortage of substitutes, too.


Substitute shortage is yet another problem to which we know the solution. It's just that the solution costs money, and we don't wanna. A good substitute teacher is worth her weight in gold, but we prefer to offer only peanuts. 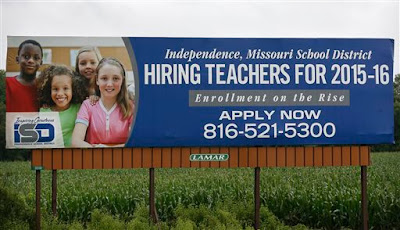 We Won’t Get Great Teachers By Treating Them Badly

How can you get more people to invest their time and energy in the quest to become a teacher?

From The Education Opportunity Network


...it just stands to reason that when you make a job more stressful and negative, you’re going to get fewer qualified people who want to do it.

DOES AMERICA REALLY HATE ITS CHILDREN?

How To Train Teachers

We live in a nation that hates education...and doesn't really care much for our children. We're a nation that lives only in the present. We aren't willing to invest in our future -- our children -- because that would mean sacrificing a little money now.


And so we arrive at the same old problem that badgers education around every turn-- we know how to do it right, but that would be expensive, and we don't want to spend a bunch of money on education.

More children are in poverty today than before the Great Recession

How can we justify tax breaks for rich people when so many of our children live in poverty? Why isn't this a national embarrassment?


One out of five American children live in poverty...