In 1964, Richard Hofstadter won the Pulitzer Prize for his book, Anti-Intellectualism in American Life in which he traced intellect in American Life. Fifty years later we're still are surprised when "anti-intellectualism" rears its ugly head and negatively impacts public education.

The Texas State Board of Education has been fighting "experts" for years. In 2009, board chair Don McLeroy, infamously exclaimed, "Somebody's gotta stand up to experts..." because those same "experts" disagreed with his religious beliefs.

Recently, the same school board voted down a proposal which called for a panel of actual content area experts to review textbooks for errors.


The push for more experts to be involved came after more than a year of controversy over board-sanctioned books' coverage of global warming, descriptions of Islamic history and terrorism and handling of the Civil War and the importance of Moses and the Ten Commandments to the Founding Fathers.

Ed Brayton, a blogger who favors fact over myth and anti-intellectualism, reacted with this.


The way we govern our schools in this country is absolutely asinine. No one in their right mind would suggest that textbooks for medical school be written or approved by anyone other than medical professionals, yet we somehow think that decisions on school curricula should be made by whatever random yahoos can get elected by a few hundred local yokels who don’t know [blank] about [blank]. I would be willing to bet that if you had school boards across the country take the final exams in almost any of the courses offered in the schools they govern, a very small percentage could even pass them, much less demonstrate a solid understanding of the subjects.

History curricula and textbooks should be determined by historians, chemistry by chemists, math by mathematicians, and so forth. It boggles my mind that anyone could possibly disagree with that.

I saw this meme on Facebook the other day... 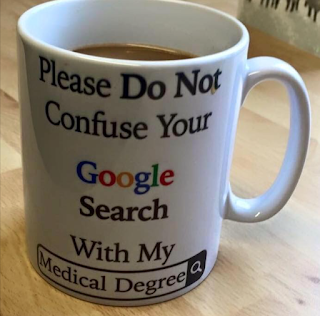 "Please Do Not Confuse Your Google Search With My Medical Degree."
It occurred to me that education "reformers" have been doing that sort of thing for years. For the most part they have confused their experiences as students with K-12 teachers' experience and education degrees. For example, the following politicians and/or billionaires, while influential in American education policy for K-12 schools, have no education training other than what they learned as students. In other words, the last time they set foot in a K-12 public school – other than for a photo-op – was when they were students (NOTE: Arne Duncan never attended public schools. Ever).
These so-called experts likely ask only trained medical professionals for medical advice or call trained legal experts when they need legal advice. And I imagine they only ask licensed plumbers for advice when they have a leak or backed up drains. Yet they had/have no trouble giving advice, proposing projects, and working for laws which have damaged the nation's public education through obsessive testing and privatization.

Add in other non-education professionals such as
The Texas State Board of Education has just taken Anti-Intellectualism one step further. They have decided that they are the only ones who understand and will have input into the content areas which are taught to their constituents' children. Since textbooks written for Texas are also sold all over the country, the Texas State Board of Education has made content decisions for other, non-Texas students as well.

No Child Left Behind and Race to the Top took public education out of local hands.

Yearly testing, closing "failing" schools (aka high-poverty schools), opening charters, evaluating teachers and schools with student test scores...are just a few of the worst aspects of the federal laws and policies which have been responsible for the increasing chaos in America's public education system. None of those things have improved teaching and learning.

The Common Core State Standards – not to be confused with actual standards written by states with the input of actual working educators – are, in some cases, developmentally inappropriate, have never been field tested, and are set in stone – unchangeable.

Teacher training is the next target. For example, Pearson has now become the "gatekeeper" for student teachers. "edTPA" is a standardized assessment for teachers working for certification. Certification is dependent on the successful completion of "edTPA."

Pearson to become the gate-keeper for student teachers in Illinois.


As the fall semester begins, all student teachers in the state will be required to pay an extra $300 (on top of the tuition they are already paying) [for edTPA] and arrange for videotaping so that they can submit a lengthy narrative that covers the planning, execution and evaluation of a series of lessons with one of their classes as well as a ten-minute video of themselves carrying out their lesson with a class.

Student teachers are required to get parent permission for their children to be video-taped.

Once submitted to Pearson, an “evaluator” will apply rubrics and 2-3 hours of their time to decide whether or not the student teacher “passes” and can be licensed to teach by the State of Illinois.

It's not just Illinois. California, New York, Wisconsin, Georgia, Oregon, and others are edTPA states. In addition, at least one teacher training institute in many other states also require edTPA – Indiana, Texas, Florida, Pennsylvania. At $300 a pop Pearson is raking it in and getting their foot in the door of teacher training.

Imagine the future of the US public education system as a subsidiary of Pearson; They train the teachers at Pearson/edTPA College, provide the curriculum, and provide the tests. Local school boards will be unnecessary. Decisions will be made in Pearson board room in London, UK.

WHERE ARE EDUCATORS VOICES?

Where are actual educators in all of this? In the same way that Texas has denied input from academic experts for textbook adoptions, politicians and policy makers have denied input from education experts for testing, curriculum, standards, and education in general. The real education experts are the millions of teachers who teach in public schools across the country, not Bill Gates...not Arne Duncan...and not Wendy Kopp.

However, the new education bill before congress, the Every Student Succeeds Act, supposedly includes provisions for listening to actual educators. The NEA released this today.


“In particular, the bill includes student and school supports in state accountability plans to create an opportunity ‘dashboard’; reduces the amount of standardized testing in schools and decouples high-stakes decision making and statewide standardized tests; and ensures that educators’ voices are part of decision making at the federal, state and local levels. [emphasis added]

After reading some analysis of the new law, it seems that it will be left up to the states to decide.

The Every Student Succeeds Act (ESSA): Some Eleventh-Hour Observations


The document continues the trend of NCLB test-heaviness. ESSA is not as punitive as NCLB, but its worn-out test-centrism will accomplish little as it prompts states to seek creative ways to retain Title I money in the face of an increasing public resistance to the very testing on which corporate reform depends.


From an assessment reform perspective, FairTest is convinced that the “Every Student Succeeds Act” (ESSA) now before the House and Senate, though far from perfect, improves on current testing policy. The bill significantly reduces federal accountability mandates and opens the door for states to overhaul their own assessment systems.

Will actual teachers have any input? We shall see...