Today would have been Madeline L'Engle's 97th birthday. She was born on November 29, 1918 in New York.

L'Engle's writing was, according to an article in the Huffington Post today by Claire Fallon, for the oddball in everyone.

Madeleine L'Engle, The YA Author For The Oddball In Everyone


L’Engle’s Wrinkle in Time quintet isn’t just for the oddballs, though. It’s for the oddball in every single one of us. In L’Engle’s books, there’s no one standing onstage who’s simply normal, accepted, whole. Reading the series is a course in learning that every person faces their own path to feeling normal, and their own obstacles to feeling special.

L'Engle was best known for her Wrinkle in time Quintet, A Wrinkle in Time, A Wind in the Door, A Swiftly Tilting Planet, Many Waters, and An Acceptable Time. The books trace the adventures of the Murry children: Meg, her brother Charles Wallace, twins Sandy and Dennys, and others, as they travel through the tesseract.

A Wrinkle in Time is a frequently challenged book because it refers to witches and crystal balls. L'Engle herself was a strong Episcopalian...and a universalist, which resulted in objections to her work from those who insisted that their truth was the only truth.

Her biography on Wikipedia claims that she...


...wrote her first story at age five and began keeping a journal at age eight.[5] These early literary attempts did not translate into academic success at the New York City private school where she was enrolled. A shy, clumsy child, she was branded as stupid by some of her teachers. Unable to please them, she retreated into her own world of books and writing.

A writer's personal history is always instrumental in their creativity. However I have to believe that, had she been better served at school, she still would have written her stories...another reason to encourage creativity, originality, and problem solving over test and punish education.

As I was reading about her I noticed her wonderful attitude about aging. She once wrote,


The great thing about getting older is that you don't lose all the other ages you've been.

Here's to the oddballs among us. 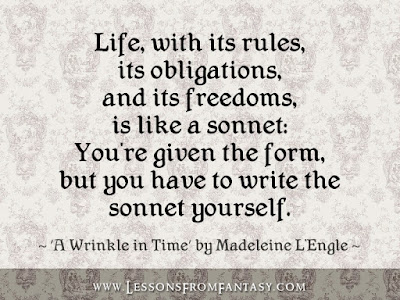 Thanks Stu ~ I needed that

Thanks, Vanessa. I'm glad it worked for you :)