An open letter to white educators.

Few bloggers write with the passion, intensity, and insight of James Boutin. In this piece he explores his journey as a white man coming to terms with his own privilege.


At some point in time, all of us have to sit down and take inventory. We have to clear the smoke from the mirror and really look at ourselves. In this difficult process, we come to realize that as we come to accept ourselves, we also must learn to accept that much of who we are is rooted, like it or not, in the roles society has created for us. To deny this is fantasy.


"All the world's a stage,
And all men and all women are merely players:
they have their exits and their entrances;
and one man in his time plays many parts,..."

Nobody else can play your role. I do not get to run from or deny my whiteness. It is one of the many parts of my role for which I am responsible to play in this life. No, I did not have a choice, but that does not alleviate me from facing a socially constructed identity for my public life that history demands I own.

Speaking of privilege...here's an interesting take on philanthropy.

Many of the "gifts" that the super wealthy give through their foundations are tax-exempt. In that way, the money is partially subsidized by American taxpayers, who make up the difference in the amount of taxes the wealthy don't have to pay because of such loopholes.


Regardless of political stands or projects, all philanthro-barons with their own foundations are generously subsidized by taxpayers. When a baron says, “It’s my money to use as I please,” he or she is wrong. A substantial portion of every tax-exempt foundation’s wealth—39.6 percent at the top tax bracket for filing in 2016—is diverted each year from the public treasury, where voters would have determined its use.43 Taxpayers subsidize not only the philanthropy of the Koch brothers, Soros, and the others but also their political work. Part of the megaphilanthropist’s wealth goes into a personal cache; part goes into a tax-exempt cache. The money saved by not paying taxes goes wherever the philanthropist wants, including to political work.

American democracy is growing ever more plutocratic—a fact that should worry all admirers of government by the people. Big money rules, but multibillionaires acting as philanthropists aggravate the problem by channeling vast sums into the nation’s immense nonprofit sector. Their top-down modus operandi makes this a powerful tool for shaping public policy according to individual beliefs and whims. And they receive less critical scrutiny than other actors in public life. Most people admire expressions of generosity and selflessness and are loath to find fault. In addition, anyone hoping for a grant—which increasingly includes for-profit as well as nonprofit media—treats donors like unassailable royalty. The emperor is always fully clothed. 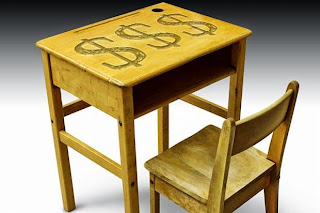 In the past, schools closed or opened because of population changes. With the privatization of public education we've seen schools closed because of the economic condition of their neighborhood, and then replaced with publicly funded, privately run, charter schools [See Chicago and Boston].

Instead of supporting, improving, and encouraging neighborhood schools, privatizers in board rooms, executive offices and state legislators are closing schools and dumping the students into privatized new schools. The "community school" is disappearing. Those schools were often a central part of a community where teachers spent their careers and taught children and grandchildren of former students. With the loss of community schools a symbol of stability and cohesion has disappeared.


This new wave of cuts in major cities like Memphis is especially troubling. It signals the end of public schooling as we know it.

Is it even legal?

In the meantime, we get to watch little kids who should be home playing or spending time with their families, parading around with signs begging adults to keep their school programs open.

This isn’t just Memphis. It is America. This is what we’ve become.

ALEC Relentlessly Cashes in on Kids and their Public Schools

Public schools are closing, charter schools are opening, and public funds are being diverted to private and parochial schools through vouchers. Why? Mainly because there is a whole s**t-load of money to be made from public tax revenues directed at education.

There are some, of course, for whom the public schools are a danger to their faith. For example, Jerry Falwell famously said, "I hope to live to see the day when, as in the early days of our country, we won't have any public schools. The churches will have taken them over again and Christians will be running them. What a happy day that will be!" Falwell, his followers, and their political descendants, are against public schools specifically because they don't teach religion.

There are others who are against public schools because of the teachers unions. They ignore the fact that schools are run by administrations and school boards, and claim, instead, that the unions are the ones making the rules.

There is a substantial amount of overlap among these groups, but the driving force behind the privatization movement is money...and the intensity in which ALEC churns out anti-public-education model legislation is proof. The "non-profit" group is intent on the privatization and profitizing of public education. 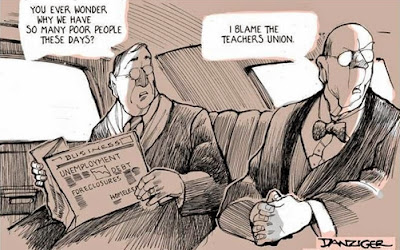 How does the cost of higher education limit and damage the future of today's young adults? How do young men and women from poor families pay for college? How long do they end up paying for their education after (if) they graduate? How many graduates end up paying for an education in a field in which they can't find work?


...we have an entire generation of Americans for whom college costs are the biggest problem in their lives. They can't afford to put money into the economy. They postpone buying homes and having children. They struggle with the stress and strain of living under the shadow of huge debt. How can the fact that some are required to take remedial college courses be a huge issue that must be screamed regularly from the rooftops, but the house of debt that has been dropped on them (amidst promises that college would be their passport to the middle class) merit barely a mention?

How can we pretend to talk about making students college and career ready and not talk about the crushing cost of college?