Thoughts on Tribalism and Self-Destruction

I've promised myself that I would not allow myself to age into one of those old men who said things like, "those kids, today," and "the world is going to hell in a handbasket." I don't want to be someone who sits and complains about the modern world.

It's true that people have always hated, feared, and killed each other, and people in America have killed each other with guns since the European "explorers" slaughtered the natives; Since America declared its "Manifest Destiny." The Long Branch Saloon and the OK Corral in the 1880s are as much a part of our nation's violent history as the murders of Chaney, Goodman, and Schwerner, the Trail of Tears, and the Civil War.

I'm not talking about international wars. I'm talking about our penchant for killing ourselves – our own countrymen. It's been going on since we arrived on the continent and we haven't matured much since then. It was just as bad in the past.

On the other hand, our self-destruction in the past was accomplished with knives, swords, muskets, six-shooters and shotguns. Technologically, things were safer back then. If you wanted to kill a large number of people (i.e. more than one) you had to reload giving others a chance to stop you before you did too much damage. Today, on the other hand, mass murder is lightning quick and much deadlier.

The paranoid right in America is fanatical about the "right of the people to keep and bear arms" to the point where the first sentence of the Second Amendment is forgotten or rationalized away. We have the right to the latest in weaponry, they say, because the Declaration obliges us to overthrow the government when it becomes destructive.

In the last week seven people died public deaths. Two because they were black and in the wrong place at the wrong time and five because they were "the government." I should add that these seven were just the nationally publicized killings. There were, of course, others that weren't important enough for the national news to report.

Sadly, not one of the killings over the last few days is the least bit surprising.

And neither are the voices of hate and fear which have risen in the aftermath (see HERE, HERE, HERE, and HERE).

Hate in America has never been buried too far beneath the veneer of polite-civilization. It's been oozing its way out of the dark recesses of the nation's fear since we Europeans landed on our shores carrying our racial and religious bigotry with us. We're quick to try to bury it again when it shows up, but it's relentless. In the last decade...with the election of the nation's first African-American president...and with the rise to prominence of a man giving that hate a supportive voice...it has flowed openly throughout the nation.

Perhaps it's a human characteristic that we're just not able to eliminate yet...the hatred borne from the fear of the "other." Humans have always been tribal – us against them. We should be civilized enough to let it go, but perhaps it's just too inbred for us to escape its destructive force.

One expression of hope was from the man who has been subjected to much of the hate over the last 8 years.

Frankly acknowledging a "tough week" in the United States after tense days of shootings and racial tensions, President Barack Obama said Saturday that he did not believe the United States was "as divided as some have suggested."

"As painful as this week has been, I firmly believe that America is not as divided as some have suggested," Obama said during a NATO news conference in Poland.

"Americans of all races and all backgrounds are rightly outraged by the inexcusable attacks on police, whether it's in Dallas or anywhere else. That includes protesters, that includes family members who have grave concerns about police misconduct, and they've said this is unacceptable. There's no division there."

There are reasons to hope. There are good people among us who want to stop the constant killing. We just have to be stronger, louder, and more persistent than those who are uncivilized. 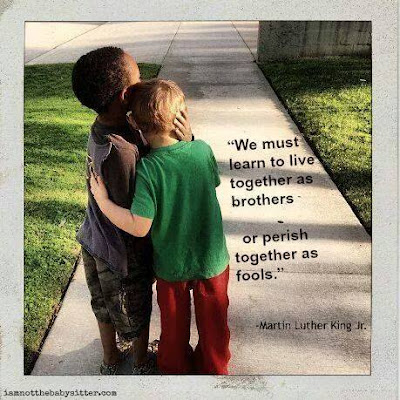 This Is Why I Hate Politics


The trouble is that emotions trump reason in matters of moral indignation. The reptilian response, based on emotion, overpowers intellect most every time. Moral psychologist Jonathan Haidt likens this dilemma to that of a little man (reason) strapped to the back of an elephant (emotion) and trying to control the bipolar pachyderm with a stick. This hardly ever works, the elephant wins, then we make up stories to rationalize why we act out in emotional ways. That is our human condition. We’re hard-wired for kneejerk moral responses - gut reactions, mindless outrage - leaving the little man kicking his legs and helpless to stop the beast from stampeding. We’re screaming before we realize we’re mad. Buttons we didn’t install get pushed and trounce us with their passionate intensity.

Politics is hateful because it preys on two demons: moral outrage and the lust for power. Most politicians go into the business for mostly good reasons, I’m sure, but the show must go on and their worthy intentions are compromised by the push for success because politics is a business first. It runs on the principles of business. Crushing. Maneuvering. Dissembling. Deceiving. And WINNING at most any cost (remove that word from the lexicon, and Donald Trump would collapse like a house of cards). With so much money in the system, the game has of course only grown more obscene.

So this is how we solve problems now


We’ve brought up a whole generation of people who think the appropriate response to problems is to bring out a gun and shoot them…and the bigger the problem the bigger the gun. We’re dealing with racism by shooting black people, dealing with trigger-happy cops by shooting random police officers, and presiding over it all, the gleeful NRA.

The Governing Cancer of Our Time


This isn’t just an American phenomenon. Politics is in retreat and authoritarianism is on the rise worldwide. The answer to Trump is politics. It’s acknowledging other people exist. It’s taking pleasure in that difference and hammering out workable arrangements.

From the New York Times


Since declaring his candidacy for president last June, Donald Trump has used Twitter to lob insults at presidential candidates, journalists, news organizations, nations, a Neil Young song and even a lectern in the Oval Office. We know this because we’ve read, tagged and quoted them all.