THE LIE OF "REFORM"

Contrary to many "reformers," I believe that:
Unlike many "reformers" I have actually spent time working as a professional educator in public schools (from 1976 through 2010, and then as a volunteer through 2016).

Public education in America can improve, but the "test and punish" methods of No Child Left Behind and Race to the Top is not the way to do it. Public schools, and public school teachers, need support, not derision.

The number one problem facing public education in the United States is the fact that more than half of America's public school students live in poverty. We have one of the highest levels of child poverty of any advanced nation on Earth. Solving the poverty problem would go a long way towards ending low student achievement.


Forget fancy evaluation schemes. Work on the cause, not the effect: feed the animal, don't waste time and money designing fancier ways of weighing it.


...you cannot simply measure students and teachers by numbers and random variables. You measure them by their personal success and growth, and much of that cannot be ascertained by impersonal assessments.

Nor can a teacher’s effectiveness truly be measured by “student achievement”. There is more, so much more, working within the student/teacher dynamic.

Don't Look Behind the Curtain: The Education Reform Switcheroo


...the true motivation of corporate education reform: to try to get people to focus on schools as the problem, so that they won't look behind the curtain at the real problem facing the country - income inequity.

From Jack Schneider in The Atlantic


Can the schools do more to realize national ideals around equity and inclusion? Without question. But none of these aims will be achieved by ripping the system apart. That’s a ruinous fiction. The struggle to create great schools for all young people demands swift justice and steady effort, not melodrama and magical thinking.

Wishing I could disrupt a conversation about lead in the water


Wait! You mean that all those tens of thousands of Chicago children who have been drinking leaded water from school drinking fountains and home sinks -- mostly poor and children of color -- have been disadvantaged by high-stakes PARCC and ISAT testing? Held back from promotion and graduation? College entrance? Their schools facing loss of funding or even closure because of lower test scores in comparison to wealthier, newer schools? Their teachers having their evaluations lowered and merit-pay-based salaries diminished, in large part because their students are exposed to leaded water?

And to top it off, told "no excuses" when they object?

Indiana's Governor, Mike ("smoking doesn't kill") Pence, has been blatantly favoring private and privately owned charter schools since his election in 2012. Now that he, along with his supermajority legislature, and his personally appointed state Board of Education, has done what he can to destroy public education in Indiana, he's ready to move on to bigger and better things. Indiana's gain is the nation's loss.

How Gov. Mike Pence worked to undermine the will of Indiana’s voters

From the Glenda Ritz Campaign


“Indiana’s teachers, parents and students can rest a little easier knowing that Mike Pence will now be absent from Indiana and soon be unable to force his political agenda on our classrooms,” said Annie Mansfield, campaign manager.

“In his time as Governor, Mike Pence has consistently put politics before Hoosier students. He created a duplicate education agency through executive order. He turned down tens of millions of dollars in desperately needed pre-K funding because of his extreme political ideology. And he removed the elected Superintendent of Public Instruction as Chair of the State Board of Education, disenfranchising 1.3 million Hoosier voters.

Sing a song of Trumpence 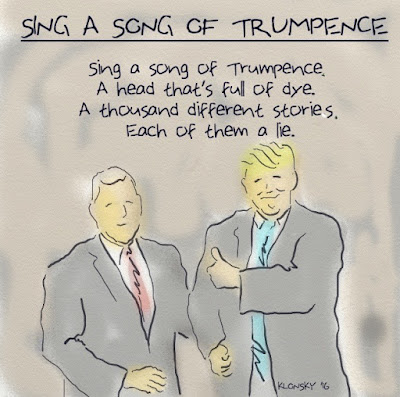