Wisdom from the Sage of Mount Vernon

Words of wisdom appropriate to our time.
...from George Washington, America's first President, on the occasion of his 285th birthday. 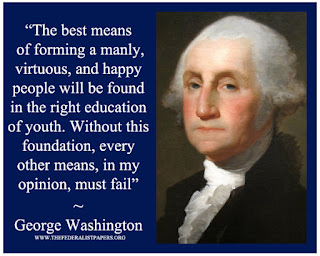 “A primary object should be the education of our youth in the science of government. In a republic, what species of knowledge can be equally important? And what duty more pressing than communicating it to those who are to be the future guardians of the liberties of the country?”
– Eighth Annual Message, December 7, 1796

“There is nothing which can better deserve our patronage than the promotion of science and literature. Knowledge is in every country the surest basis of public happiness.”
– First Annual Message to Congress on the State of the Union, January 8, 1790


ON PATRIOTISM AND CAUTION

“Guard against the impostures of pretended patriotism.”
– Farewell Address, Sep. 17, 1796


ON THE CURRENT CABINET

“Associate yourself with men of good quality, if you esteem your own reputation; for ‘tis better to be alone than in bad company.”
– Rules of Civility and Decent Behavior in Company and Conversation

While we are contending for our own liberty, we should be very cautious not to violate the rights of conscience in others, ever considering that God alone is the judge of the hearts of men, and to him only in this case they are answerable.
– letter to Benedict Arnold, Sep. 14, 1775


ON THE EXPECTATIONS OF LEADERS

Remember that it is the actions, and not the commission, that make the officer, and that there is more expected from him, than the title.
– Address to the Officers of the Virginia Regiment, Jan. 8, 1756

However [political parties] may now and then answer popular ends, they are likely in the course of time and things, to become potent engines, by which cunning, ambitious, and unprincipled men will be enabled to subvert the power of the people and to usurp for themselves the reins of government, destroying afterwards the very engines which have lifted them to unjust dominion.
– Farewell Address, Sep. 17, 1796

Think before you Speak pronounce not imperfectly nor bring out your Words too hastily but orderly and distinctly.
– Rules of Civility and Decent Behavior in Company and Conversation