[This post is being republished. The original post had an erroneous quote. I appreciate all the "proofreaders" among readers who keep me focused and offer corrections when I make an error.]

So teachers have walked out. 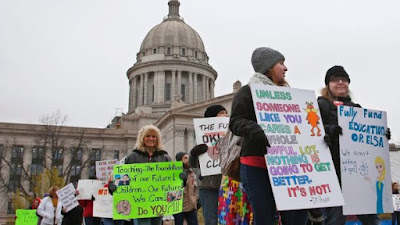 Cue Betsy DeVos, the billionaire who never worked a day in her life, who knows nothing about public education (having never experienced it as a student, teacher, or parent), and who bought her job as Secretary of Education by bribing senators with campaign contributions.


“I think about the kids,” DeVos said Thursday, according to The Dallas Morning News. She had been touring a middle school and meeting with leaders of an anti-violence initiative in Dallas. “I think we need to stay focused on what’s right for kids. And I hope that adults would keep adult disagreements and disputes in a separate place, and serve the students that are there to be served.”

DeVos is conveniently able to compartmentalize adult and child...to keep them separate. If she had any experience with public education, however, she'd understand that separating the needs of children and adults in an educational setting is damn near impossible.

She seems to think, for example, that adults who work in a school work in a vacuum into which the outside world doesn't reach. She fails to understand that every cut in funding, every increase in testing (and accompanying costs), every job lost, every incident of gun violence, every increase in ICE detentions, every dollar lost to corporate tax breaks, has an impact on our classrooms.

Perhaps she believes, like Oklahoma Governor Mary Fallin, that teachers are just striking so they can get a better car. 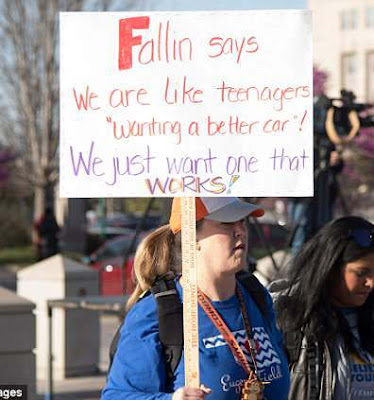 IT'S MORE THAN JUST SALARIES

Most news reporting, while sometimes mentioning the lack of school funding, focuses on teachers salaries, because, in the past, when a group of workers has gone on strike, it's been for higher wages and better working conditions. Workers have rarely, if ever, gone on strike to improve conditions for their clients.

So it's hard for selfish, "I've got mine, get your own," anti-common-good, no-more-taxers (on the rich) to understand that there are reasons for the current teacher actions that go beyond teacher salaries.


Teachers are concerned with a range of issues, from books and supplies to safe buildings.

These crumbling textbooks show why Oklahoma teachers are walking out


Scarberry is one of several teachers and parents in Oklahoma who have shared photos and stories via social media of crumbling, outdated textbooks as part of their plea for more education funding. Some are posted on the "Oklahoma Teacher Walkout -- The Time Is Now!" Facebook page.

The state of the textbooks go a long way toward explaining why thousands of teachers in Oklahoma left their classrooms and rallied at the state capital on Monday and Tuesday, asking for teacher and support staff raises, as well as better funding for their schools and students.

Would you want your child sitting on one of these broken desks? 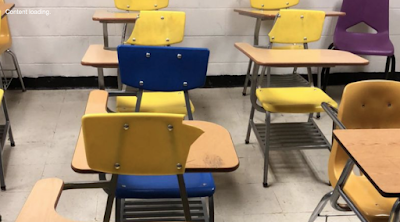 ...or using these Government and History books circa 19?? and a dozen books doesn't seem like it's enough for a whole class, does it? 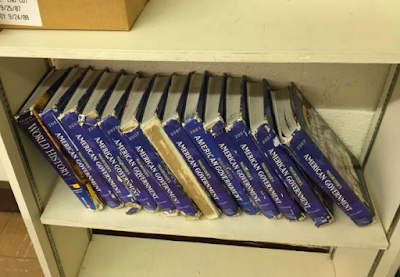 Teachers know it's not just about salaries.
Teachers are not the only ones affected if schools don't have supplies, adequate facilities, up to date learning materials, and safe classrooms.

It has an impact on our children...the children who will make up the citizenry of the future...so, by extension, all of us.

On the other hand, perhaps DeVos understands this all too well. Improvements in public education would sabotage her efforts to have all public schools labeled as "failing" which would, in turn, sabotage her dream of nation-wide school privatization. 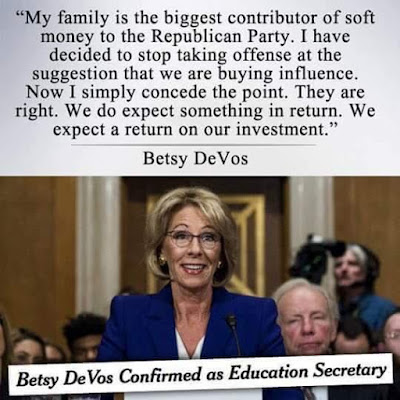