Listen to This #5 – A True Patriot

Since the 1960s I've noticed that different people have different ideas about patriotism. When I was protesting against the Viet Nam War in the sixties I was struck by the fact that those of us who were trying to get the government to stop the war felt just as patriotic as those who called us "commies" and "traitors." The same differences appear today. It is obvious that the definition of patriotism is not the same for everyone.

In honor of Independence Day, 2018, *here are some quotes about patriotism that align with my definition. 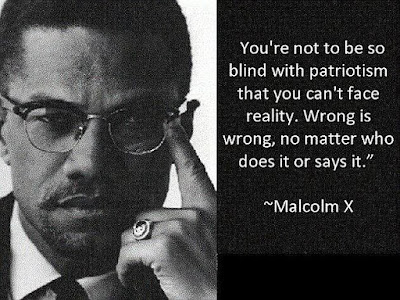 
My country, right or wrong; if right, to be kept right; and if wrong, to be set right.


No matter that patriotism is too often the refuge of scoundrels. Dissent, rebellion, and all-around hell-raising remain the true duty of patriots.


True patriotism hates injustice in its own land more than anywhere else.


I am against any nationalism, even in the guise of mere patriotism. Privileges based on position and property have always seemed to me unjust and pernicious, as did any exaggerated personality cult. 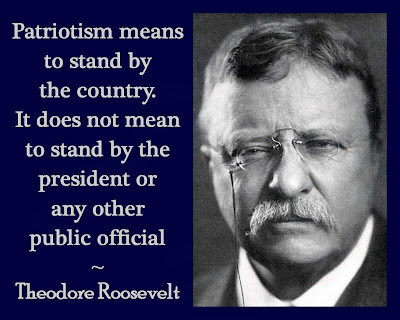 
Nationalism is our form of incest, is our idolatry, is our insanity. "Patriotism" is its cult. It should hardly be necessary to say, that by "patriotism" I mean that attitude which puts the own nation above humanity, above the principles of truth and justice; not the loving interest in one's own nation, which is the concern with the nation's spiritual as much as with its material welfare—never with its power over other nations. Just as love for one individual which excludes the love for others is not love, love for one's country which is not part of one's love for humanity is not love, but idolatrous worship.


It should be the work of a genuine and noble patriotism to raise the life of the nation to the level of its privileges; to harmonize its general practice with its abstract principles; to reduce to actual facts the ideals of its institutions; to elevate instruction into knowledge; to deepen knowledge into wisdom; to render knowledge and wisdom complete in righteousness; and to make the love of country perfect in the love of man.


Patriotism, not nationalism, should inspire the citizen. The ethnic nationalist who wants a linguistically and culturally uniform nation is akin to the racist who is intolerant toward those who look (and behave) differently. The patriot is a "diversitarian"; he is pleased, indeed proud of the variety within the borders of his country; he looks for loyalty from all citizens. And he looks up and down, not left and right. 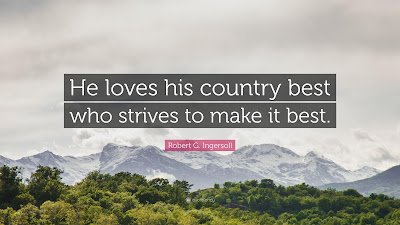 
A man's feet should be planted in his country, but his eyes should survey the world.


The highest patriotism is not a blind acceptance of official policy, but a love of one’s country deep enough to call her to a higher plain.


If patriotism were defined, not as blind obedience to government, nor as submissive worship to flags and anthems, but rather as love of one's country, one's fellow citizens (all over the world), as loyalty to the principles of justice and democracy, then patriotism would require us to disobey our government, when it violated those principles.

My fellow citizens of the world: ask not what America will do for you, but what together we can do for the freedom of man.

*h/t to blogger Ed Brayton who posted some of these quotes. I liked the idea so much I decided to copy him and add others.