2018 Medley #19: LeBron James and the Promise of Public Schools 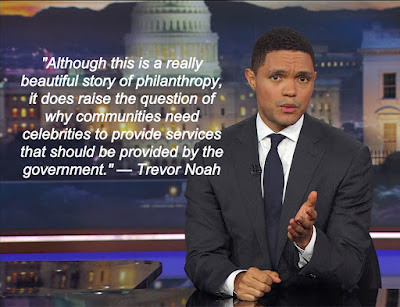 INVEST IN PUBLIC EDUCATION AS IF THE FUTURE DEPENDS ON IT

LeBron James is a millionaire...but unlike others among the super-rich who stick their wallets into America's education infrastructure, The LeBron James Family Foundation, along with community partners, is helping to fund a public school run by a public school system, and staffed with unionized public school teachers. The taxpayers are paying for the school, teachers, and the usual expenses just like they do for all public schools, while the Foundation and its partners are providing funds for building renovations, wraparound services, and other extras.

This kind of investment is what all our children need and deserve. The Finns, when they decided to improve their schools, invested in education as if their future as a nation depended on it. We should do the same. This article describes the benefits provided by an outpouring of community help...volunteers and local businesses. This should be the design for all local public schools...a community effort for the community's (in this case, the larger community) children.


What does it take to get some of education’s best practices into one school and off the ground?

For the I Promise School, it’s taken one superstar athlete, one force of a foundation, one willing school district, one traveling food truck and at least 35 other community partners that provide an army of volunteers — and millions of dollars in funding.

And that’s just the beginning.

A kid had to grow up and dunk a million basketballs to provide his community with basic services.

Props to LeBron James and his new Akron public school — but what about the other kids?

The effort going into the I Promise School reflects the understanding that a community's children are the community's future. Public schools provide continuity and stability which privatization does not. When a community invests in their public schools they are building a foundation for the future, not lining the pockets of privatizers.

Why is it that we are only able to provide this type of program for children when there's a wealthy individual behind it? LeBron James and other donors for the I Promise School have stepped forward to help the most at-risk students in Akron, but what about the other students in Akron? What about students in Chicago, or New York, or Oakland?

Our children should be our highest priority -- all of them. As Jersey Jazzman asked (see below), "Why do we give disadvantaged children what they need only when an exceptionally generous celebrity leads the way?"


...James’s focus on building a school within a traditional public district suggests he understands the importance of the traditional public education system in the United States, which some argue is the country’s most important civic institution and which is under assault from school “reformers” who want to privatize it.

Still, the fact that this school opened only because of the good graces of a very wealthy, civic-minded athlete underscores the continuing problem with education funding in this country. And it highlights the push for school “choice” that has Betsy DeVos, President Trump’s education secretary, as its chief advocate.

.@KingJames’s new school looks extraordinary: https://t.co/EYmTUv4yId But why doesn’t EVERY child have a neighborhood school like this? Why do we give disadvantaged children what they need only when an exceptionally generous celebrity leads the way?
— Jersey Jazzman (@jerseyjazzman) July 30, 2018

All public schools...all of them. [empasis added]


A school funded by LeBron James in Akron, Ohio, is a beautiful example of what all our public education should look like.

LeBron James might not know about this latest study showing that private schools are no better than public schools. He might not have read Steven Singer's blog post...

Wealth – Not Enrollment in Private School – Increases Student Achievement, According to New Study.

Instead of spending tax-payers' money to support private and religious schools we should make sure that all of our public schools are fully resourced and are responsive to the needs of the students who attend.


A new peer-reviewed study from Professors Richard C. Pianta and Arya Ansari of the University of Virginia found that once you take family income out of the equation, there are absolutely zero benefits of going to a private school. The majority of the advantage comes from simply having money and all that comes with it – physical, emotional, and mental well-being, living in a stable and secure environment, knowing where your next meal will come from, etc.

The study published in July 2018 attempts to correct for selection bias – the factors that contribute to a student choosing private school rather than the benefits of the school, itself.

No, private schools aren’t better at educating kids than public schools. Why this new study matters.

It's encouraging that James understands that public schools serve communities well. Public schools provide stability for children and, when well resourced, provide their students with the best education America has to offer.


Despite evidence showing otherwise, it remains conventional wisdom in many parts of the education world that private schools do a better job of educating students, with superior standardized test scores and outcomes. It is one of the claims that some supporters of school choice make in arguing that the public should pay for private school education.

The only problem? It isn’t true, a new study confirms.

A Decade of Neglect: Public Education Funding in the Aftermath of the Great Recession

"Why do we give disadvantaged children what they need only when an exceptionally generous celebrity leads the way?" Because we still haven't committed to giving our children the resources they need to secure their...and our...future. Our leaders are so hell-bent on starving the government of tax revenue, that they are starving our future.

Instead of investing in our children we're stripping public education of needed funds.


...this analysis will show how policies of austerity have had a negative impact on education and have not produced the promised boost in economic growth.