Reposted and updated from 2017.

A middle school social studies teacher once commented to me that he had trouble teaching his curriculum because so many of the students in his classroom were reading "below grade level." My response was, "We're all reading teachers."

A few days ago, the Annenberg Public Policy Center released its annual Constitution Day Civics Survey. The results of the survey suggest that we're all civics teachers, as well - or we ought to be.

The survey found that Americans don't know enough about how our government works. Some highlights:

It's only slightly comforting that Americans probably know that we have the freedoms guaranteed in the Bill of Rights even though they might now know which Amendment they're in. But it is very disturbing (at least to me) that only about one-third of Americans surveyed can name all three branches of the government.

Can you name the President Pro Tempore of the Senate? Did you know that he is third in line for the presidency after the Vice President and the Speaker of the House? (It's Orrin Hatch. Are you surprised that it isn't Mitch McConnell?)

How many members of the House of Representatives are there? How was that number arrived at? What is the "System of checks and balances?" How many members are there of the Supreme Court? Why did the founders decide that the President should be chosen by Electors instead of the people themselves? 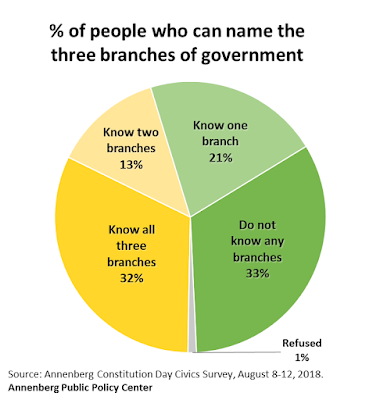 While 37% of those surveyed couldn't name any of the rights guaranteed under the First Amendment, most could name at least one. Freedom of Speech was the answer the largest group of people gave (48%), but, as the chart below illustrates, the other rights guaranteed are unrecognized at an abysmal level.

Now, my guess is that most Americans know we have freedom of religion and a free press, but just don't know that it's the First Amendment which guarantees those freedoms. Still, it's distressing that only 1 in 7 Americans know that the First Amendment guarantees freedom of the press, especially now, considering the way the press is being treated by the current administration. 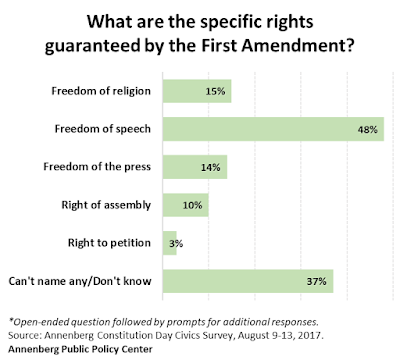 THE RIGHT TO BE IGNORANT

In his comments about the Annenberg Survey, blogger Ed Brayton asked


...can a democracy really function effectively when the voters are this ignorant about such basic matters of government?

On September 17, 1787, 231 years ago today, delegates to the Constitutional Convention in Philadelphia, signed the Constitution of the United States. It was ratified nine months later and went into effect 18 months after that.

The challenge: Teach it. We all need to be civics teachers!