Don't Bother Me With Politics. I Just Want To Teach.

A DAY IN THE LIFE

You come to school early every day, work your hardest to help the children in your classroom, stay late to finish getting ready for tomorrow (or take work home).

You buy materials for your classroom, averaging around $500 a year, but sometimes you spend more, as much as $1000. Sometimes you forget to keep track of what you get...things like snacks for the kids, stickers, posters, paper, pencils, markers/crayons, and books. It doesn't matter too much, only a portion of what you spend is deductible on your taxes.

You find yourself worrying about the struggling students in your class. There just aren't enough hours in the day for you to get to them. There are too many other students in your class...and it's impossible to help all of them who need extra help during the school day. So you often stay after school or come in early, to help one or two who have transportation. Some of your students need extra help, but there aren't enough specialists to help them. Some need medical attention, but the school nurse is only at your building three days a week. Some of them need time with the school's counselor or social worker, but their schedules are full. You end up being a nurse and counselor, as well as a teacher.

It's Saturday, time to catch up. You spend the morning at school and rush to your own child's soccer game after a few hours. You get home, make dinner, eat, and clean up, then collapse on the couch.

As you fall asleep watching TV, you think about the upcoming "Test week" and you worry that your students aren't ready. Your evaluation is dependent on their success or failure despite the fact that you can't go home with them to make sure they get enough sleep, do their homework, and are food- and housing-secure. If you teach third grade you understand that your students' academic futures depend on their ability to pass the "reading" test.

You're an average American teacher. Your classroom is overcrowded. Your school is underfunded.

How did this happen to American public school teachers? 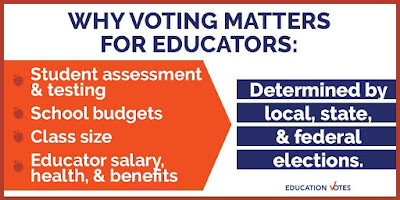 TEACHERS AND THEIR SCHOOLS UNDER ATTACK

The attack comes from the state legislature, the federal government, and those who voted for anti-public education politicians, or those who didn't vote at all.

I've heard teachers say, "I don't want to be bothered by politics. I just want to teach. I probably won't vote anyway."

It may not be to their liking, but teaching is a political act.


“[Teachers] want to tell legislators what’s going on, they want legislators to visit their classrooms, they want people to help them have the tools and conditions they need to do their job,” said Randi Weingarten, president of the 1.6 million-member American Federation of Teachers. “They don’t see that as political, they just see that as part of, ‘Help me do my job.’”

Education is political. Can teachers not be?


...if we CHOOSE not to vote, we are allowing those who do vote to make decisions for us in our towns, our states, and our nation.

In Indiana, the members of the state board of education chosen by the Governor, and the legislature (led by the Governor), all elected by the voters of Indiana (the voters, including teachers' friends, neighbors, relatives, and colleagues) have...
If you (or your friends, neighbors, relatives and colleagues) didn't vote or voted for policymakers who don't support public education, then you (and they) have contributed to the legislation damaging public education in Indiana.

Teachers who don't vote allow others to make decisions about what goes on in their classrooms. As the former first lady, Michelle Obama said this week, "Democracy continues, with or without you." If you don't vote, it goes on without you.


Teachers, vote for candidates who will protect and support your profession and against those who pass legislation and make policy that will damage public schools.

Parents, vote for candidates who will support the public schools that 90% of our children attend.

Taxpayers, vote for candidates who will invest in the future of your state by supporting the constitutional mandate for a free, public school system. It is the duty of the General Assembly to


...provide, by law, for a general and uniform system of Common Schools, wherein tuition shall be without charge, and equally open to all.

The public schools of Indiana need you