A Direct Threat to Every Country on the Planet

WE HAVE MET THE ENEMY AND HE IS US.

You may have missed it among all the news coverage of the upcoming midterm election, the tweets, and the World Series. The UN's Intergovernmental Panel on Climate Change released a report outlining the catastrophe which is approaching if we don't do anything to head of the warming of the Earth – fires, flood, drought, severe weather, which will invariably lead to climate refugees, fresh water shortages, and conflict over arable land and water.

Only one nation isn't on board with the rest of the world. The United States.

Last week French President Macron asked the members of the UN to start economic boycotts against us. "Macron's point is that any country that fails to fight climate change poses a direct threat to every country on the planet."

The New York Times reported on the UN Climate Report...


The report, issued on Monday by the Intergovernmental Panel on Climate Change, a group of scientists convened by the United Nations to guide world leaders, describes a world of worsening food shortages and wildfires, and a mass die-off of coral reefs as soon as 2040 — a period well within the lifetime of much of the global population.

The report “is quite a shock, and quite concerning,” said Bill Hare, an author of previous I.P.C.C. reports and a physicist with Climate Analytics, a nonprofit organization. “We were not aware of this just a few years ago.” The report was the first to be commissioned by world leaders under the Paris agreement, the 2015 pact by nations to fight global warming. The authors found that if greenhouse gas emissions continue at the current rate, the atmosphere will warm up by as much as 2.7 degrees Fahrenheit (1.5 degrees Celsius) above preindustrial levels by 2040, inundating coastlines and intensifying droughts and poverty.

...and a link to the actual report.


“One of the key messages that comes out very strongly from this report is that we are already seeing the consequences of 1°C of global warming through more extreme weather, rising sea levels and diminishing Arctic sea ice, among other changes,” said Panmao Zhai, Co-Chair of IPCC Working Group I.

WE ACCEPT SCIENCE WHEN...

Climate change caused by human action is as established a science as any of those things. The only "doubters" are those whose millions billions are made by, or supported by fossil fuel companies. These are the same people who brought you the "Cigarettes are not harmful" lie.

Will we come to our senses soon enough to preserve our environment for our children and our grandchildren (and our great-grandchildren)? According to the UN Report, we should change our ways for anyone who expects to be alive in twenty years, too. At "three-score and ten" I may not be around in 2040, but (hopefully) my children, my grandchildren, and my great-grandson will be.

Are we smart enough to sacrifice some economic gains for clean air, clean water, and a livable planet? The Earth will be here in 20 years no matter what we do. Will we? 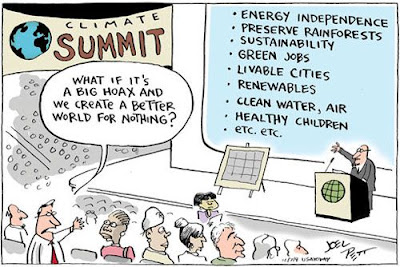 Merchants of Doubt: How a Handful of Scientists Obscured the Truth on Issues from Tobacco Smoke to Global Warming by Naomi Oreskes, Erik M. Conway