Albert Einstein is remembered as the physicist who developed the theories of special, and general relativity.


the laws of physics are the same for all non-accelerating observers, and that the speed of light in a vacuum was independent of the motion of all observers...

...that massive objects cause a distortion in space-time, which is felt as gravity.

He came to the U.S. in the early thirties and, with the rise of the Nazi party in Germany and the accompanying anti-semitism, he decided to stay (after short stays in both Belgium and England). He was already internationally known, having won the Nobel Prize for physics in 1921 for his discovery of the law of photoelectric effect.

Princeton offered him a job and he became a U.S. citizen in 1940 (while also retaining his Swiss citizenship).

Einstein was more than a world famous scientist. He was also someone who examined philosophy, religion, and politics and much of his writing has applications for students and teachers.

The quotes below (from Wikiquote) reflect the universality of Einstein's thought and apply to education and learning.

THE SUPPORT FOR SCIENCE AND KNOWLEDGE

It is ironic that the first quote I've listed here is one on the value of science institutions to nations. This week I read that our current administration has requested deep cuts in science funding.

The administration is asking for...
It would be nice if someone would stop the war against knowledge.

Science is international but its success is based on institutions, which are owned by nations. If therefore, we wish to promote culture we have to combine and to organize institutions with our own power and means.

As long as we're looking at the behavior of our current government, here are a couple of things Einstein said that are important to our current national atmosphere.


Nationalism is an infantile disease. It is the measles of mankind. 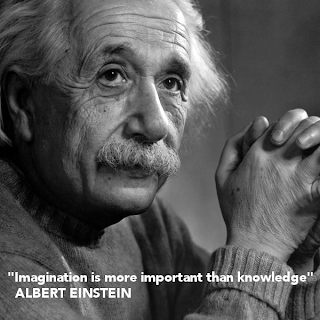 Here are three thoughts from Einstein that relate directly to our overuse and misuse of testing. He understood that testing isn't learning. Schools ought to be places where opportunities are provided for learners to explore the wonders of personal and intellectual growth, not the learning of facts for a test.


I am enough of an artist to draw freely upon my imagination. Imagination is more important than knowledge. Knowledge is limited. Imagination encircles the world.

One had to cram all this stuff into one's mind for examinations, whether one liked it or not. This coercion had such a deterring effect [upon me] that, after I had passed the final examination, I found the consideration of any scientific problems distasteful to me for an entire year.

It is, in fact, nothing short of a miracle that the modern methods of instruction have not yet entirely strangled the holy curiosity of inquiry; for this delicate little plant, aside from stimulation, stands mainly in need of freedom; without this it goes to wreck and ruin without fail. It is a very grave mistake to think that the enjoyment of seeing and searching can be promoted by means of coercion and a sense of duty.

ON TEACHERS, TEACHING, AND LEARNING

Einstein's experience reinforces the fact that relationships in education are as important as the content.


School failed me, and I failed the school. It bored me. The teachers behaved like Feldwebel (sergeants). I wanted to learn what I wanted to know, but they wanted me to learn for the exam. What I hated most was the competitive system there, and especially sports. Because of this, I wasn't worth anything, and several times they suggested I leave...I felt that my thirst for knowledge was being strangled by my teachers; grades were their only measurement.

After reading the following quote I thought it would be nice to be able to gather all my former students together in one place and apologize (on behalf of myself and the state's curriculum) for not letting them have more personal involvement in their growth.


It gives me great pleasure, indeed, to see the stubbornness of an incorrigible nonconformist warmly acclaimed. 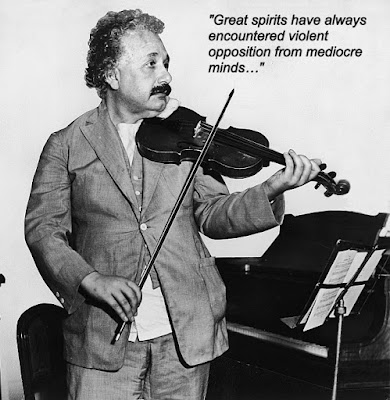 Teachers want to be paid enough to live on, but for the most part, we follow our career in order to help the next generation through the life-bumps on the way to adulthood. I don't like the word "calling" when it comes to teaching, mostly because this gives legislators the idea that we don't care about getting paid enough to live on. But teachers are, for the most part, "called" to do their work because they love children and learning.


Only a life lived for others is a life worthwhile.

The beauty of science is that, not only does it begin in wonder, it also ends in wonder. Often non-science teachers are afraid to teach science. This is, in part, becuase their own sense of wonder has been lost...and that is too bad.


All of science is nothing more than the refinement of everyday thinking.

It's often said that children become less curious as they go through school. Is that because we teachers do something to stifle their curiosity?


The important thing is not to stop questioning. Curiosity has its own reason for existence. One cannot help but be in awe when he contemplates the mysteries of eternity, of life, of the marvelous structure of reality. It is enough if one tries merely to comprehend a little of this mystery each day. Never lose a holy curiosity.

WHY IS THERE SCHOOL?

What is the very purpose of schooling? Do we teach students so they can "grow up to be something" or so they can grow as human beings?


It is essential that the student acquire an understanding of and a lively feeling for values. He must acquire a vivid sense of the beautiful and of the morally good. Otherwise he—with his specialized knowledge—more closely resembles a well-trained dog than a harmoniously developed person. 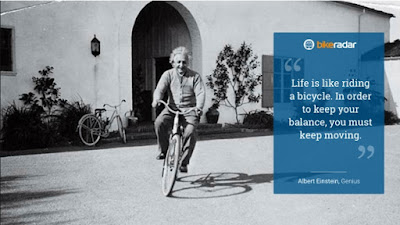