Will Teachers Listen to Their Own Message?

A STATE THAT HATES ITS PUBLIC SCHOOLS

Last year around this time I listed a short (recent) history of the ways the Indiana Republican-dominated legislature and governors hated Indiana's public schools.

In Indiana: Still hating public education after all these years I discussed how the legislature, under the leadership of Governors Daniels and Pence restricted collective bargaining for Indiana's teachers, refused to acknowledge with economic support the value of experience and education among Indiana's teachers, supported rules making it easier for unqualified non-professionals to teach in Indiana's schools, withdrew due process from teachers' rights as employees, and stalled funding.

At the end of 2019, Indiana teachers finally got the message and took it to the streets. On November 19th, 2019, fifteen to twenty thousand (depending on who's writing the report) teachers and public education supporters marched on the Indiana Statehouse asking for more money for Indiana's schools.

The legislature, under the leadership of Governors Daniels, Pence and Holcomb, has steadily increased economic support for vouchers since the first voucher plan became law in 2011. Similarly, support for charter schools has expanded since 2011. Meanwhile, support for public education has lost ground to economic downturns and to inflation.

The pro-privatization forces in the legislature decided to end the practice of electing a state Superintendent of Public Instruction. In the future, Indiana will be one of only a few states where the governor and the legislative majority have complete control over the state's educational system from the Superintendent to the fully appointed State Board of Education. The people no longer have a direct voice in education policy in Indiana. (At this link to the Education Commission of the States note that Indiana will move from Model III to Model I with the exception that leaders of each legislative house will also appoint one member of the State Board of Education)

Indiana's current Governor, Eric Holcomb, and the supermajority-based houses of the Indiana General Assembly have made it clear that the Red for Ed rally in November didn't convince them that teachers actually mean business.

Teacher pay, according to the Governor, is still being studied, and according to the Republican leadership in the legislature, since 2020 isn't a budget year, spending more money on public schools or teachers won't happen. Teachers and public schools are going to have to wait for next year when the entire state budget is examined.

But they didn't hesitate to dump more money-making deals on charter and voucher schools!

Today the Senate will discuss and vote on a bill that has an amendment that will allow charters to grab a share of public school money acquired through referenda. That same day last week that the Senate passed that amendment, they also ok'd a bill that refused to force the state audits of charters. Never mind that we, the taxpayers of Indiana, just lost more than $85 million on two fraudulent virtual charters.


It’s hard to think of a more villainous move than the state stealing from the funds that desperate school corporations have to go begging for because the state is starving them of funding. If school districts were properly funded in the first place, there would be no need for any referendums. But in order to stay afloat, many districts have done the incredibly difficult work to get the extra money they need from their communities who are so generous to give a little extra for the cause of public education. And now you see your elected officials trying to rob public schools of even those funds. It makes me shiver to think what might be coming next.

In addition, the House has a plan to increase the taxpayer cost of vouchers by $6 to $12 million...because the increase to vouchers (which was several times larger than the increase to public schools) during last year's budget isn't apparently enough.

Both bills will be heard this morning, Monday, March 9. 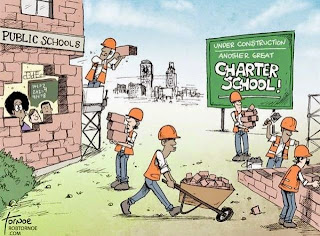 WHERE ARE THE TEACHERS?

Where are the teachers in all of this?

Local teachers in Allen County are staging a Red for Ed day Walkin on Wednesday, March 11. This means that teachers will gather at the front door of their schools, wearing red, and walk into the building together.

Will the legislature hear that?

The proof will come in November. Will teachers hear the same message they sent to the legislature?

Will teachers and public school advocates join together to get rid of the privatizers in the legislature and work for those who support public education?

Or are the Governor and legislators correct in their assumption that the teachers who wore Red for Ed care more about the culture war issues that currently divide the nation than they do about their careers and students? 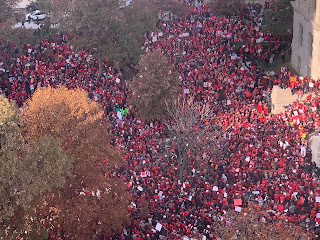