Poverty and Education, Time in School, Testing, Teach For America, Finland, Reading Technology and Brain Research
Class Matters. Why Won’t We Admit It? The unaddressed link between poverty and education

The fact that this article is subtitled "The UNADDRESSED Link Between Poverty and Education" speaks volumes to the power the "reformers" hold over information. Does the average American not know that poverty affects education?


...in the United States over the past decade, it became fashionable among supporters of the “no excuses” approach to school improvement to accuse anyone raising the poverty issue of letting schools off the hook — or what Mr. Bush famously called “the soft bigotry of low expectations.”

Such accusations may afford the illusion of a moral high ground, but they stand in the way of serious efforts to improve education and, for that matter, go a long way toward explaining why No Child Left Behind has not worked.

Yes, we need to make sure that all children, and particularly disadvantaged children, have access to good schools, as defined by the quality of teachers and principals and of internal policies and practices.

But let’s not pretend that family background does not matter and can be overlooked. Let’s agree that we know a lot about how to address the ways in which poverty undermines student learning. Whether we choose to face up to that reality is ultimately a moral question.

The "Reformer's" Case of Denial

Fresh from her important presentation at the National Opportunities to Learn Summit Diane Ravitch reports on an important paper about Education and Poverty in her Bridging Differences blog entry, Scrooge and School Reform.

The paper is titled Education and Poverty: Confronting the Evidence. The abstract...


Current U.S. policy initiatives to improve the U.S. education system, including No Child Left Behind, test-based evaluation of teachers and the promotion of competition, are misguided because they either deny or set to the side a basic body of evidence documenting that students from disadvantaged households on average perform less well in school than those from more advantaged families. Because these policy initiatives do not directly address the educational challenges experienced by disadvantaged students, they have contributed little -- and are not likely to contribute much in the future -- to raising overall student achievement or to reducing achievement and educational attainment gaps between advantaged and disadvantaged students. Moreover, such policies have the potential to do serious harm. Addressing the educational challenges faced by children from disadvantaged families will require a broader and bolder approach to education policy than the recent efforts to reform schools.

Report busts myth that U.S. class time is much lower than that of high-performing nations


Many modern school reformers have unfortunately maintained a narrow focus about the conditions that lead to academic success, including the notion that more school time is necessarily better.

For years now we’ve dealt with their refusal to face the impact of poverty on students, their disinclination to revamp outdated curriculum, their obsessive reliance on standardized testing as the be-all and end-all of accountability measures, and their unwarranted faith that the corporate world holds the answers to fixing the public education system.

At some point, perhaps the weight of the evidence against their agenda — and it is growing every day — would come crashing down on them and make them reconsider.

To pay for improving conditions for children of poverty: Reduce testing


Testing only when it is helpful will save billions. This can be spent to improve health care and nutrition, increase access to books and take other steps that will protect children from the effects of poverty.


TFA acknowledges that experience matters on its "research" page. Check out "the "Portal Report" which is a pdf: "Teachers with 4 years or more experience out perform teachers with 1 year of experience on 9 out of 10 indicators."

Books vs. screens: Which should your kids be reading?


The hyperlinked, text-messaging screen shapes the mind quite differently than the book, according to Wolf. “It pulls attention with such rapidity it doesn’t allow the kind of deep, focused attention that reading a book 10 years ago invited,” she says. “It invites constant change of attention, it invites multitasking. It invites, in other words, a kind of triage of attention.” 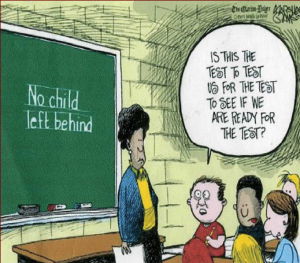