John Kuhn, superintendent of of Perrin-Whitt Consolidated Independent School District (TX) has been a vocal opponent of the corporate "reform" movement for a long time (See here, here, here, and here). His passionate defense of children over test scores has been an inspiration.

In this article posted on Valerie Strauss's Answer Sheet, A Superintendent Calls School Reformer's Bluff, he asks a pointed question. If the "reformers" are really interested in children (not just money or union busting), then, in addition to the attention public education gets why don't we also pay attention to how local and state governments do to improve the lives of children?

As a public school administrator, I have been a steadfast critic of the legacy of No Child Left Behind. But I’ve recently figured out a way that school reformers can get me on their side. It’s very simple.

My concern has long been that the test-based focus of NCLB and the insistence on assigning labels to struggling schools has really been about convincing Americans that public schools are failing in order to justify privatizing the system — to the benefit, of course, of investors, not children. Why think anything else, when “higher standards” are accompanied by slashed education budgets, continuing inequities in school funding, and continued efforts to roll back public sector employee rights?

But reformers such as former Washington D.C. Schools chancellor Michelle Rhee and Sandy Kress — a lawyer who was a principal architect of the school accountability system in Texas (during the administration of then gov. George W. Bush) which served as the basis for NCLB — assure us that all their reforms are really about the children.

They repeatedly call on get teachers and administrators to quit making excuses and hold themselves accountable for the educational outcomes of poor and minority students. Who could be against that?

Well, I’m calling their bluff. Let’s see if it really is all about the children.

NCLB has done one important thing: By disaggregating data, it has forced teachers and administrators like me to agonize over the outcomes of our neediest students.

But after 10 years, it is clear that NCLB’s reforms haven’t spurred miracles, and it is time that the profound problem of inequality is addressed. The deck is stacked against kids who live in poverty not just because their schools are on average worse than others, but also because of the circumstances of their lives when they leave campus.

Itt’s time that we admit that it isn’t just teachers holding back poor and minority students back. The problems are societal.

So I’m calling on reformers — Kress and Rhee included — to lend support for a new kind of reform, one that steps outside the schoolhouse and shares the onus for achievement with more than just teachers.

Let the 50 states disaggregate equality-related data by ethnicity, gender, and socioeconomic status, and let us rank the states and reward them for closing all the societal inequalities that are truly at the heart of our achievement gap. There should be an incentive for voters to elect lawmakers who will craft policies that minimize inequalities.

Let the states figure out how to close their gaps, but reward results. Citizens in states whose data shows progress toward equality benchmarks should be rewarded with a lower federal income tax rate.

Note that the states can figure out how to get there, so no one can accuse me of urging socialist fixes to inequality. I don’t care how you fix it, just fix it. As a teacher I am calling on society to do its part to save these kids! The kind of plan I am describing leaves mechanisms to the states — it merely incentivizes equality.

We should all insist that our leaders build a system that guarantees the demise of inequity on these shores. Let’s move together toward a broader social accountability, driven by data and gauged by progress toward statistical, measurable, social equality.

Here’s an incentive: As a state moves closer to demonstrable equality according to data, then Washington could reduce the federal income tax rates charged to citizens in that state. Let citizens who opt for equality in so doing opt for lower taxes and more individual liberties. Incentivize equality, and see if kids don’t do better in school.

Let’s publish the data in newspapers. Let’s label all 50 states once a year. Let the states stand on their records and compare their progress. Let’s ensure that no more American Dreams get deferred because of unequal opportunity.

Today some 22 percent of American children live in poverty. Are we going to pretend forever that it is acceptable to ignore the needs of children outside the schoolhouse and blame teachers and principals for everything that happens inside?

And so I as an educator now say to a nation exactly what it has said to me for years: No excuses! Just get results.

Give me equal children, and I guarantee you that my fellow public school teachers and I will produce graduates who will create a brighter future for this nation than you or I ever dreamed possible.

Thinking structurally about social ills, rejecting excessive individualism for community-based, it-takes-a-village-style responsibility, has been out of favor in America for a long time. In education reform, what’s been in style instead is vilifying teachers and their unions. For some schools, making the grade has meant cooking the books to show results. Let’s hope that the time to reform this business-modeled mindset has finally come. -- Judith Warner in Why Are the Rich So Interested in Public-School Reform? 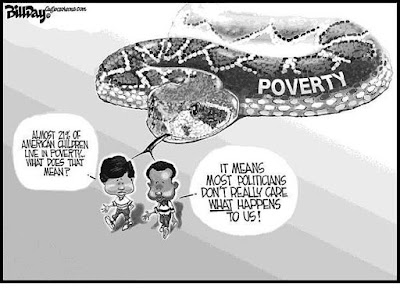