A Lifetime of Elementary Schools -- Part 5

Part 5 in a self-indulgent virtual trip reminiscing about my years of teaching elementary school... 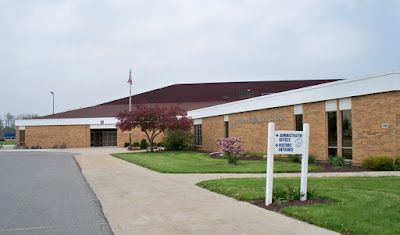 Moving can be a emotionally wrenching experience. I had taught at Monroeville Elementary School for 11 years. I had made some good friends there and gotten to know hundreds of students. Monroeville Elementary School, however, was a 45 - 50 minute drive from my house...each way. It was hard to leave what had become my professional home, but after 11 years and thousands of driving miles, I decided it was time to move closer to home, so I applied and received a transfer to Woodburn Elementary. In the Fall of 1987 I started teaching fourth grade. During the four years I was at Woodburn I taught a different grade configuration each year. I went from fourth grade to second grade, to a combined second and third grade, and finally finishing, like I did at Monroeville, with third grade.

Woodburn was built as an "Open Concept" school. The walls between the classrooms did not reach the ceiling, were moveable and didn't prevent noise from traveling from one classroom to another. There were some serious drawbacks to that kind of school building...it was noisy, discipline was hard to maintain because of the constant buzz of noise around the building, teaching had to be done at a low sound level. Teachers must be trained to effectively utilize a school building without walls and that training hadn't occurred. The result was a building full of traditional classrooms with no permanent walls.

There were however two important advantages. The first was that the walls could be moved and rearranged to accommodate larger or smaller classes. The shape of the classrooms could be adjusted as well. In the four years I was there I had a different shaped wedge of classroom...of different sizes...each year. The adjustment was not hard and after a few weeks of school each year the size and shape of the classroom was not an issue.

The second advantage was with collaboration between and among teachers. In the primary area of the building, where the walls were only 4 feet high (as opposed to 6 feet high in the intermediate area), it was possible for teachers to observe each other, as questions, make suggestions, and see different teaching styles. I learned a lot just watching the excellent teachers on either side of me during the four years I was there.

Challenging Students: Teaching at Woodburn was my first experience with teaching Amish students. It turned out that it was not much different than working with "English" students in terms of ability, behavior and personalities. I taught one student (third grade) who stands out in my mind, however. She was an average student, well behaved, responsible, but she woke up very early every morning to do her chores on the family farm. When she got to school she had been working with animals, hay, and other farm related allergens. By the time she walked up to my desk my eyes were itchy and the sneezing had begun. I was literally allergic to this student!

...and parents of course. Woodburn was the school where a parent requested that her child NOT be in my class because she didn't want her daughter in a classroom taught by a man. It was also the school where a parent walked into my second grade classroom literally yelling at me and emptied her child's desk announcing that she was never coming back. The child was having difficulty learning and the parent didn't want to acknowledge that.

Staff: Just like any school building Woodburn had a range of below average to above average teachers. When I started at Woodburn the kindergarten teacher was the same person with whom I student taught. I could now observe her as a colleague and realized that I had been very lucky to have had the opportunity to student teach in her classroom.

The teachers I got to know best were in the second and third grades. I'm now volunteering for one of the former third grade teachers at Cedarville Elementary School, another building in the same school system. There are several other people at Cedarville, who were at Woodburn when I was there...including the RtI specialist and the secretary.

Principal: When I started at Woodburn, I must admit that I was not impressed with the principal. He seemed just average...and not especially ineffective. However, as the years went on...even after I left, I began to realize the strengths he brought to his job which made him one of the best principals I worked for. John, knew every child in the building. He went on field trips with classes, was outside at recess frequently, and was in the cafeteria every day helping with crowd control, cleaning tables, and talking to students.

During a conference with the parents of the child mentioned above (the one who was pulled from my classroom by her mother) the parents began to talk about how bad the kindergarten teacher had been. John told them that the conference was about their child and finding ways for her to succeed. The parents persisted in their critique of former teachers. John stood up, went to the door, opened it, turned to us and said, "If you're going to continue to focus on past teachers instead of how we can help your child do better in class...then this conference is over." He didn't just defend his teachers blindly. He would listen to criticism and bring that information back to the teacher if needed, but this was a case of parents trying to blame others, in this case an above average teacher, with no basis. His focus was on the students.

Finally, when I was packing up my files during my last year of teaching I looked back on my evaluations. John's evaluations were among the best I had received. He didn't necessarily score me higher than other principals had, however he included constructive criticisms and detailed suggestions. It was clear that he knew me and had analyzed my teaching style...the evaluations I got from him were among the most helpful during my 35 years of teaching.

I left Woodburn after the 1990-1991 school year. Since that time the principal has retired, staff members have moved to other buildings and Woodburn Elementary School, now called Woodlan Primary School, is slated to be closed after this year.


~~~
A Lifetime of Elementary Schools

Interesting to hear about this again!