Bennett was a strong "reformer" pushing merit pay (teacher evaluations based on student test scores), vouchers, school takeovers, and corporate charters...none of which have been shown to help student achievement.


“This [race] is definitely being watched nationally as a referendum on reform,” Mike Petrilli, the executive vice president of the right-leaning Fordham Institute and Bennett ally, told the Associated Press. “If Tony Bennett can push this kind of aggressive reform agenda and win, it will give a big lift to other politicians eager to enact similar reforms.”

The Indy Star‘s Scott Elliott posits Bennett will land on his feet. But what about the national education policy circles who supported him? As Andrew Ujifsa writes at State EdWatch:

This has to be a major blow for charter, school choice, and the general “education reform” community. Bennett was an outspoken champion of big changes that happened in the Hoosier State and others around the country, and he was also a strong GOP voice for things like the Common Core State Standards. What will his loss mean for that community going forward?

As Indiana Chamber of Commerce president Kevin Brinegar summed it up for Inside Indiana Business, “virtually all the legislators who voted in favor of education reform were re-elected and the Superintendent of Public Instruction was not.”

From the Fort Wayne Journal Gazette...

A mandate for Ritz


Ritz’s victory has much more to do with the grassroots efforts of classroom teachers and public education advocates across the state.

His campaign chest of about $1.5 million included contributions from billionaires and hedge-fund managers far from Indiana.

“If Bennett loses, this is a huge defeat for the right-wing reform agenda of teacher bashing and privatization,” said Diane Ravitch, an education historian and author of “The Death and Life of the Great American School System.” “Last year, the conservative Thomas B. Fordham Institute honored Bennett as the ‘reformiest’ state superintendent. He has a national profile for his hard-driving agenda of charters, vouchers and high-stakes testing. A loss for Bennett means that Indiana voters are not willing to hand off public education to for-profit corporations or to allow Bennett to dismantle the teaching profession.” 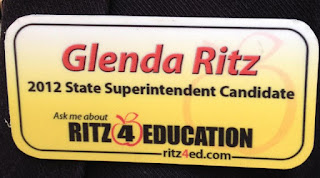 Check out this clip from WANE TV in Fort Wayne. Some of us from Northeast Indiana Friends of Public Education (NEIFPE) attended a rally for Glenda Ritz last Friday at Friends, Too Restaurant in Fort Wayne on November 2.

As the camera pans from left to right, my washed out image, pans from right to left. I'm wearing my green NEIFPE shirt.

So glad that Ritz won--among others.