What Does it Mean to be an Educator?

Yesterday Anthony Cody blogged about the drama unfolding in New Mexico where teachers are expressing a desire to have an educator as state Education Secretary. The quote below from Cody's piece, New Mexico Education Secretary's Hearings Bring More Light to Corruption in Education Reform, is from Larry Langley, the head of New Mexico's Business Roundtable.

[UPDATE: Diane Ravitch has some information about Hanna Skandera, the acting secretary of education in New Mexico. You can read it HERE.]

Now, being a former teacher is no guarantee that one will be a good state education leader. Many of us in Indiana (and now Florida) recognize that former Indiana State Superintendent of Public Instruction, Tony Bennett, who was a career teacher, was not a friend to public education. The same is true on the Federal level. Rod Paige, who was Bush II's first Secretary of Education was a high school Health and PE teacher for a few years. It was under Paige's watch, you remember, that No Child Left Behind became the law of the land. Paige is also famous for calling the NEA a "terrorist organization."

So, while I think it's important that a state (and federal) education chief be an experienced educator, experience alone is no guarantee that a trained educator will be able to resist the call of politics and work for the benefit of the students under their care. That being said, it's insulting to have the public school chief of the state or federal administration making policy for public schools when the newest graduate of an accredited education school (note: this does not include TFA) is more experienced in the field.

According to Langley, above, anyone who's taught something to anyone is an educator. The person who taught me how to use the cash register at Carl Fischer of Chicago when I started working there in 1970 was, by that definition, an educator. Does that mean that since I have bandaged a child's cut finger I'm a doctor? I've removed a splinter using tweezers...does that make me a surgeon? Obviously not...and teaching someone how to be a politician or run a cash register does not make one an educator.

What does it mean to be an educator?

Why is being a "teacher" something that many people consider easy work? Why is education something that you don't need experience in or background in before you are allowed to make policy for students, teachers and schools? Why do lawmakers in Indiana think that almost anyone can be an educator?

Most Americans have gone or are currently going to school. Teachers are everywhere...and have influenced nearly all of us. Most people, even poor students such as I was, can name a teacher or two who had a positive influence on their lives. Furthermore, most teachers are very good at what they do. They make the job of teaching look easy. It looks easy...so therefore, the conventional wisdom goes, anyone can do it. We're all, as Langley says, "educators."

Q: Why does Arne Duncan (I'll use Duncan as an example because, as Secretary of Education he's the nation's "top educator." The same holds true for any non-educator who thinks they know-it-all about education) think he's qualified to make policy for teachers and public schools?

A: He had good teachers when he was growing up. He went to well resourced schools with well-trained teachers. He learned his lessons, from identifying letters of the alphabet to learning how to "find x" to learning how to write a term paper for his 400 level Sociology class at Harvard. He watched his teachers as they skillfully led him to understanding and knowledge. It's likely however, that he didn't see the amount of work they put into their daily lessons or the preparation they needed to deal with the problems children bring to their classrooms every day.

Teaching is not easy, at any level. Teaching a classroom of students is hard, demanding, sometimes grueling, work. It is not, as a parent of one of my students once said to me, "simply a question of telling them" what they need to know. Arne Duncan was never trained in pedagogy, child development, psychology, curriculum development and design or any of the other things a teacher must know in order to be a teacher. Imparting knowledge is just one aspect of teaching...and I would maintain that it's not the most important.

Duncan doesn't realize (and neither, obviously, does Langley) that it takes knowledge and skill to be a teacher because his memories of being in a classroom are immature memories. Does he really have any idea what his first grade teacher did to help him learn to read? Does he understand how his fifth grade teacher helped him memorize the Gettysburg Address? Does he really understand how his high school History teacher inspired him? Does he know all the work his English teacher did to prepare a lesson on Shakespeare?

No. He doesn't. He was a child...and he viewed his teachers through a child's eyes. To use eduspeak, he didn't have the "background knowledge" necessary to understand the amount of effort it took to educate him. He still doesn't and neither do most other "reformers" who are making education policy in America, today.

Teachers need to speak out. What does it mean to be an educator? 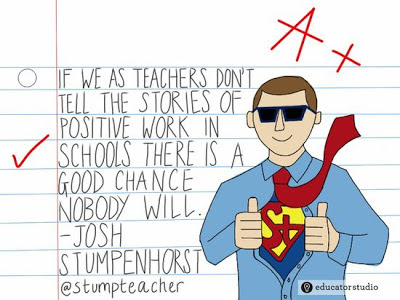