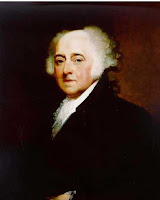 On Tuesday I attended the ICPE Rally for Public Education in Indianapolis. Our goal was to persuade legislators to reject expanding Indiana's voucher program. Vic Smith, of ICPE, has done an excellent job of explaining what the drawbacks of expanding the voucher program are in clear, objective terms. It will be expensive, draining much needed funds from the public schools in our state. See his Statehouse notes.

Before the rally began members of the Northeast Indiana Friends of Public Education (myself included) visited with three of our local state Senators to discuss the issue. All three senators, David Long (R-16), Dennis Kruse (R-14) and Thomas Wyss (R-15) were very gracious, very welcoming, and willing to spend time talking with us. I have to admit that made me nervous.

All three indicated their support for Vouchers and "choice."

Kruse, who is my local senator, is also supportive of choice.

The Hoosier Survey, an annual opinion poll by Ball State University, found that 70% of parents in Indiana are satisfied with their public schools. An even larger percentage (82%) of citizens who had children in the public schools were very or somewhat satisfied with their local public schools. This is consistent with national surveys as well...those people who know the schools and who are invested in them with their children are overwhelmingly supportive of them. The same poll reported that the people's number one choice for helping schools improve - was increased parental involvement...not vouchers, not charter schools, not more testing.

Perhaps it was support for public schools that Senator Long was referring to when he tossed out the number 70% because the same poll showed that only 28% of citizens supported the expansion of Indiana's voucher program (down from 34% last year). A slightly larger percentage of citizens are against expansion of the voucher plan...and the largest group, 39%, have no opinion. Clearly, the last group shows that expanding the voucher plan in our state is an answer without a question. It has no reason for being other than the political transfer of public funds into private hands. The largest urban voucher program in the nation -- in Milwaukee Wisconsin -- has been studied during its 22 year history. The latest study confirms that there is no academic advantage achieved by using voucher programs. Competition, as most teachers will tell you, doesn't help improve public schools. Teachers are not holding back until there's competition down the road. Vouchers and competition take attention from the real problem facing public education, poverty.


...the data and the reports simply fail to demonstrate that voucher schools are associated with improved outcomes.

...our analysis finds little or no indication that pupils in those Milwaukee public schools that have more school choice possibilities nearby made significantly greater year-to-year gains in primary school tests than pupils in other Milwaukee public schools. The effect of other variables, such as staying in the same public school from year to year, seem to have a more consistent (albeit small) positive impact on student performance, particularly on language arts test score gains.

Decades of research confirm that poverty has a huge impact on student learning. Many studies show that more poverty means lower scores on all measures of school achievement. There are also many studies that show us just how poverty negatively impacts school performance.

Representative Behning (R-91) is also in favor of "choice" and "competition."


More school choice, he said, is good for all schools.

“It improves all when you have choice,” Behning said. “Everybody is going to be more competitive for children and try to meet their needs.”

The facts, however, don't seem to agree.

As of this writing there's a lawsuit challenging the constitutionality of the current voucher program pending before the Indiana Supreme Court. Senator Long, during our conversation said that "everyone" expects the law to be upheld, so expanding it is not premature...

...which doesn't change the fact that, according to Vic Smith, more than $20 million will be diverted from public to private, mostly religious, schools.

People have had enough. Cathy Fuentes-Rohwer, of the Monroe County affiliate of the ICPE, received cheers when she told the crowd in Indianapolis that, "...enough is enough."


We are here because we are sick to death of the constant draining of our funds to private interests...

We are here because we think it is wrong that our PTAs and PTOs have to hold bake sales and put pretty baskets up for auction while politicians redirect MILLIONS of our tax dollars to private schools with their talk of school choice. 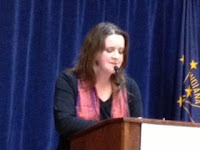 The expansion of the voucher program is a welfare plan for private, mostly religious schools...a handout...a giveaway of public funds to corporations and churches. Add this to the "turnaround" plan which transfers public schools to private corporations and we can see a clear pattern of privatization. Despite their comforting words the senators we talked to on Tuesday don't seem to be interested in supporting public education at all. Based on their actions, their goal appears to be nothing less than the complete privatization of Indiana's education system.

This is who we voted for, Indiana. Is this what we want?