Guest Commentary on the school grading scandal: No excuse for cheating


...The emails affirmed to teachers that their palpable unease over how Bennett forced his agenda—that "My way or the highway!" approach without including or trusting the expertise of the people on the frontlines—was founded unease.

We felt it last fall when the announcement of school letter grades was delayed. We felt it during the REPA 2 teacher licensure rules changes when Bennett and the State Board tried repeatedly to force licensure revisions without complying with Indiana's rulemaking process. And we felt it when we learned that out-of-state takeover companies were being paid $800,000 per school to do nothing more than to observe a school for an entire year without lifting a finger to assist those schools.

...As teachers, we often share with our students that adage, "Cheaters only cheat themselves." Today I understand more clearly how incomplete that simple lesson is. I understand the message, but the damage done by this latest revelation runs much deeper. This disgrace taints—and has an impact on—the state's accountability system and Indiana’s local school communities. 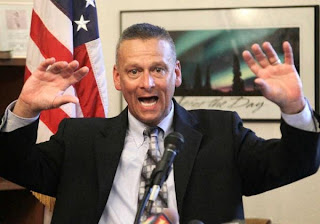 Tony Bennett resigned, still proclaiming his innocence, despite the email trail. In his news conference this morning (August 1) he had the nerve to say that the revelation of the emails was "politically motivated." He could be correct, of course...I don't deny that there were possibly -- or even likely -- political motives in the release of the emails. However, his claiming "foul, politically motivated" is particularly hypocritical considering the political motivations which surrounded his tenure as Superintendent of Public Instruction in Indiana...


He resigned because of the email trail showing he manipulated Indiana’s opaque A-F grading system to raise the grade of a charter run by a major GOP donor.

No doubt, he will have a soft landing in the corporate or foundation world, where the “reformers” rule. Or maybe a high-level job at the U.S. Department of Education.

Here's a satirical post worthy of the Onion. It's time for the "education experts" to put their money where their mouths are. How long would Bill Gates last in front of a classroom? Arne Duncan? Michelle Rhee? Here's some wishful thinking for your consideration.


“With the aid of the Selective Service and approval from President Obama,” Mann said, “a new draft will be instituted. All education experts between the ages of 23-60, all writers of books about education, all executives of companies profiting from the public schools, will be subject to call to active duty.” (Gasps from audience.)

“Some of you should expect notices this week.

“We know this may come as a shock. But each of you will be committing to work for ten years—minimum—in the toughest public schools. None of that sissy two-year stuff like ‘Teach for America.’” Mann added with a smile. “This time we really save kids. Ten years…I mean…you are committed to saving kids? Am I right?

“Here are the assignments we know. Mr. Gates, you will teach students with severe behavior disorders at Marvin Gardens High School in Seattle, starting next month. You will be replacing a teacher who was assaulted last June and has not recovered from a broken nose and broken jaw.”

Walmart's low wages cost taxpayers millions of dollars in welfare every year...yet the Waltons continue to do what they can to shut down public education.


Critics say Teach for America’s novice teachers are ill-prepared to lead the most demanding classrooms in the country, and that their two-year terms add to churn in schools that need stability. Teacher unions say TFA undercuts union jobs. Earlier this month, a group of TFA alumni organized the first national gathering of people opposed to Teach for America. 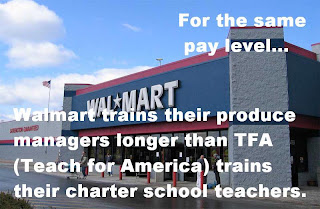 A Snarky Letter for A Heartless Leader: My Response to TFA Chicago’s Josh Anderson

Here's one way to break an obstinate union which had the nerve to strike...lay off experienced educators and hire Teach For America novices.


CPS recently signed a new contract with TFA. Is this a good investment given the severe cuts?
No, investing in TFA is about breaking the CTU, saving money on the backs of poor children, and the push for privatization. In many ways, this “investment” is about getting rid of experienced teachers–the kinds of teachers who do things like go on strike for equitable, quality schools and have the audacity of staying committed to a school community long enough to collect a well-deserved pension.

How much time do school districts spend on standardized testing? This much.

“As damaging as the obsessive emphasis on testing often proves to be for kids in general, I believe that the effects are still more harmful in those schools in which the resources available to help the children learn the skills that will be measured by these tests are fewest, the scores they get are predictably the lowest, and the strategies resorted to by principals in order to escape the odium attaching to a disappointing set of numbers tend to be the most severe.” -- Jonathan Kozol, The Shame of the Nation: The Restoration of Apartheid Schooling in America


*Students can spend 60 to more than 110 hours per year in test prep in high-stakes testing grades.

*Including the cost of lost instructional time (at $6.15 per hour, equivalent to the per-student cost of adding one hour to the school day), the estimated annual testing cost per pupil ranged from $700 to more than $1,000 per pupil in several grades that had the most testing.

This article dispels myths about public education in America. Poverty matters. Money matters. Our schools are not failing. Repeat it over and over again.


Rutgers professor Bruce Baker looked at the data and concluded:

So instead of talking about the need to “tighten our belts” and adjust to the “new normal” we need to talk about doing what’s really best for kids and getting the resources that are necessary.


“I got into this profession knowing that I would never be a wealthy woman, but I never thought I would have to be swiping an EBT card either,” Furst said. “I thought, ‘I must just be doing something wrong, it shouldn’t be likethis.’ But there is this whole wave of us, just struggling. And we’re getting to a point where it can’t hold.”

That sentiment has been echoed by other educators in Western North Carolina, many of whom say they may have to leave their chosen professions or leave the state to provide their families with a decent standard of living. Some already have.

Travis Hartley, who just ended his 10th year teaching math at Enka High School, left his job this year for a better paying one in Pennsylvania, after he and his wife said they couldn’t make ends meet for their two young children.

Hartley, who has a master’s degree, is National Board certified, and was named Teacherof the Year in his district, said he had no choice.

“I loved it at Enka,” he said. “I loved my kids, I loved it. It was a hard decision, but the decisions made by the General Assembly this year made it an obvious choice. I had to go.”

Is Public Education on Its Death Bed? Should It Be? Seven Points of Argument, Leverage and Change.


One could easily make the case that public education doesn't work well, is stuck in a previous century, is cumbersome and inequitable and failing lots of kids. It deserves to die, because it's not doing its job consistently. The question is: What will replace it?

One could also make a passionate case that a free, high-quality fully public education for every child is one of America's best ideas--and that some things should not be subject to market pressures. If we've ever laid claim to being a great nation, it's certainly public education that built the framework for that greatness. The question is: How do we build on the values and pieces of the current system that work well?