Making Up For Lower Taxes

IT'S PATRIOTIC TO PAY TAXES

The cry from the Friedmanesque Free Market Fanatics is that we all need to pay less in taxes. Conservative politicians, who have convinced conservative Americans to elect them, are following through on that philosophy. So now American's taxes are lower than at any time in the last 6 decades.

Taxes, however, are important. They are necessary to keep the country and important services running. Our infrastructure is failing, our public schools are getting shortchanged by corporate charters and vouchers (and just today the Indiana House Education Committee passed on a bill that would once again expand Indiana's voucher program). Taxes are a way of paying dues...a membership fee in society. George Lakoff in his book Don't Think of an Elephant wrote


Taxation is paying your dues, paying your membership fee in America. If you join a country club or a community center, you pay fees. Why? You did not build the swimming pool. You have to maintain it. You did not build the basketball court. Someone has to clean it. You may not use the squash court, but you still have to pay your dues. Otherwise it won't be maintained and will fall apart. People who avoid taxes, like corporations that move to Bermuda, are not paying their dues to their country. It is patriotic to be a taxpayer. It is traitorous to desert your country and not pay your dues. [emphasis added]

If we're all paying less in taxes...where are the services coming from? Who's paying to keep up the roads and bridges, schools, and parks? 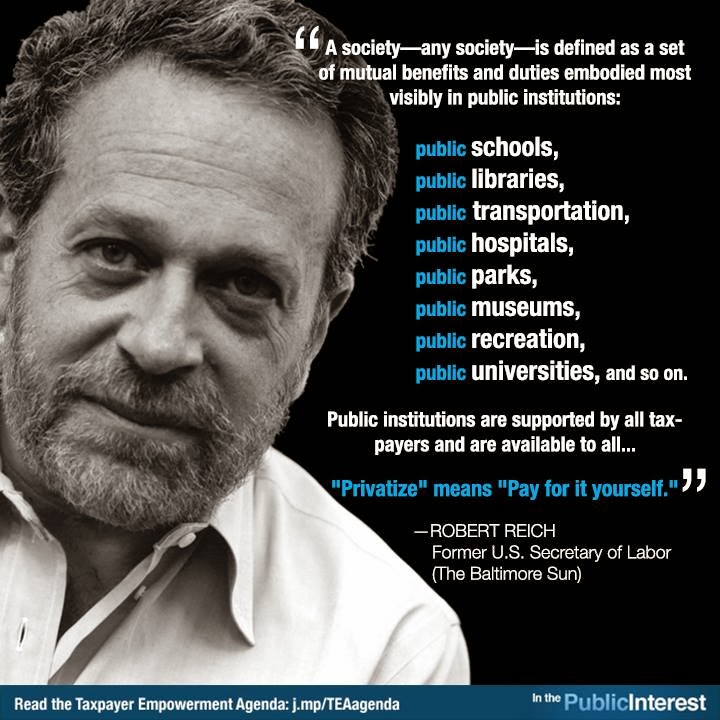 The logical outgrowth of the obsessive policy of no taxes is that the public sector is starved for funds, at least in the area of education. And this is used as a reason to turn public school buildings and money over to corporate run charter schools and vouchers schemes for private schools. Public money, what little there is, is being syphoned away from public schools and redistributed to corporations and religious entities. And the public has very little to say about how the money is being spent...and how the schools are being run. There are no publicly elected school boards overseeing private schools. Corporate charters are led by the bottom line, not necessarily what's best for students. Public schools are being starved and then blamed for lower achievement because they haven't the facilities and materials to do the job they're supposed to do.

It's not just local oversight that's missing...in Indiana, at least, it's at the state level as well. Governor Mike "less government" Pence added an additional layer of bureaucracy to Indiana's education infrastructure by creating a new agency which duplicates and overlaps the Department of Education and its elected Superintendent of Public Instruction. The new agency, CECI, led by charter school advocates (including the Governor, himself), and its appointed members are taking even more money from the public coffers. Six of the sixteen appointed members of the new agency are drawing salaries of over $100,000. Vic Smith, of the ICPE, the Indiana Coalition for Public Education, explains.


In August, Governor Pence created the Center for Education and Career Innovation, a $5 million duplicative education bureaucracy, to divert control of Indiana education policy from Superintendent Ritz to his office. He was willing to do this, risking his national reputation for efficiency and small government, because of deep differences on educational policy.

The idea of public schools as a necessary part of a democratic society is lost on these people. When they see failing students, they don't see poverty and the failure of policy makers to provide compensatory funding and programs. They see an opportunity to turn a profit for themselves or their friends.

AN OFFER FOR TEACHERS TO SUBSIDIZE THE STATE

Who makes up the difference for underfunded public schools? In wealthy neighborhoods, the citizens can afford to subsidize the funding for their schools -- effectively raising their own taxes. In poor neighborhoods, on the other hand, there's no one to make up the difference resulting in less professional development for teachers, deteriorating facilities, less money for supplies and teaching materials, less extra curricular opportunities, fewer books in school libraries (if there even is a school library), less money for wraparound services, and so on...so teachers invest their own money. 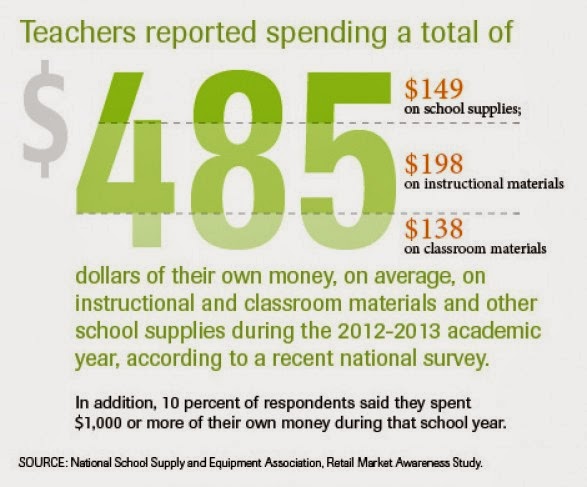 The average American public school teacher makes $56,383, a 1% decrease in real dollars over the last decade. In Indiana, the average is $51,456, a loss of about 10% over the last decade (lowest is South Dakota at $39,580 a change of -0.6% over the last decade). Yet teachers regularly spend hundreds and even thousands of dollars out of their own pockets each year to supply their classrooms. States cut funding and the politicians brag about how they are saving money...but then teachers subsidize the state and spend their own money on their students.

In fact, teachers regularly spend so much of their own money that at least one lending institution has a special offer for teachers to get loans for classroom supplies (click the image for a larger version). The fact that teachers spend their own money for supplies which should be provided by their employer is bad enough. Now someone is going to make a buck by loaning them the money they need to do their job, and charging them interest for it.


If you’re looking for just one image that says a thousand words about what’s wrong with America, here’s a contender. It is a screenshot of the website for the Silver State Schools Credit Union: 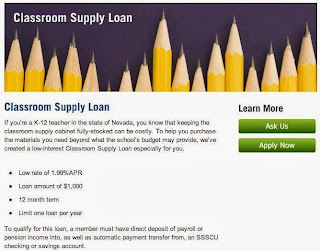 Yep, it’s an invitation to K-12 teachers to go into debt to do their job.

So much for lower taxes.

I just saw this offer...