The Indiana State Board of Education is once again looking at the qualifications for educators and are examining the proposed changes described in REPA III (Rules for Educator Preparation and Accountability) this week.

In 2012, the Tony Bennett-run school board tried to force REPA II through in Bennett's last days in office. Bennett was apparently trying to get them approved before then Superintendent-elect Glenda Ritz could take office. Because of procedural problems, however, the state attorney general prevented implementation. Vic Smith reports.

I made some comments at the time because REPA II called for lowering standards for teacher, principal and superintendent licensing.


REPA 2 was Dr. Bennett’s parting shot to try to lower standards for getting teacher and administrator licenses. He asked the State Board to pass the revised rules in December of 2012 after his election defeat. They were passed but with so many amendments that the Attorney General ruled that the rules could not be finalized until they were clarified and given another round of public hearings.

The CECI has now picked up the ball and is calling them REPA 3. They contain at least four really bad ideas:


1) Individuals with any four year degree can get a 5-year “Adjunct” teaching license.

2) Training required to get a principal’s license would be reduced.

3) Training required to get a superintendent’s license would be reduced.

4) Administrative certification can be offered by non-higher education organizations. Whether for-profit private organizations can become training sites for administrators and adjunct teachers is not clear but remains a possibility that should be clarified before the hearings.


...[The] problem is the assumption that pedagogical training is a trivial part of becoming a teacher. Why would anyone bother to look into a School of Education teacher training program, especially a rigorous one, if they know they can teach with any bachelor’s degree after passing a content area test? Has the Governor concluded that to know something is to be able to teach it to students? We know better.

A couple of years ago I read a prediction by Stephen Krashen. He predicted that Arne Duncan would eventually claim that

Duncan hasn't said that yet...Indiana Governor Mike Pence, the CECI (his shadow department of education) and supporters of REPA III have beaten him to it. In her book, The Flat World and Education, Linda Darling-Hammond discussed just this issue.


Ronald Fersuson demonstrated that...that the single most important measurable cause of increased student learning was teacher expertise, measured by teacher performance on a statewide certification exam measuring academic skills and teaching knowledge, along with teacher experience, and master's degrees. The effects were so strong, and the variations in teacher expertise so great, that after controlling for socioeconomic status the large disparities in achievement between Black and White students were almost entirely accounted for by differences in the qualifications of their teachers. [emphasis added]

There are two important things to note in that paragraph. First, the teacher expertise included teaching knowledge. Knowledge about teaching is important...not just content knowledge! Second, just to make sure that we're clear on the issue of poverty, this study was done "after controlling for socioeconomic status" (Teachers are the most important IN-SCHOOL factor in student learning. Out of school factors play a much bigger role. See Poverty and Potential: Out-of-School Factors and School Success by Berliner, et al).

Other pertinent comments from Darling-Hammond


The strongest predictors of student failure were the proportion of teachers without any training or certification...

Among the school resource measures, the level of teacher experience and a related measure -- the percentage of teachers without a full credential -- are the variables most strongly related to student achievement.

[NOTE: These are all referring to the effect on student achievement after controlling for socioeconomic status.]

Professional work needs to be done by professionals. 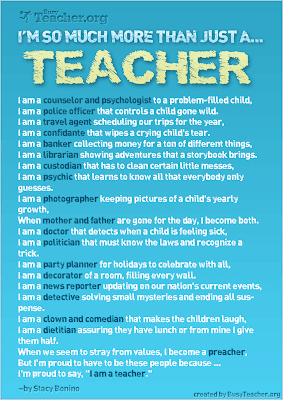 If you'd like to tell the School Board how you feel about REPA III, public comments on the proposed language will be accepted until January 31, 2014. Go the SBOE website at http://www.in.gov/sboe/REPAIIIcomment.htm to enter your comments. The proposed rule language can be found here.